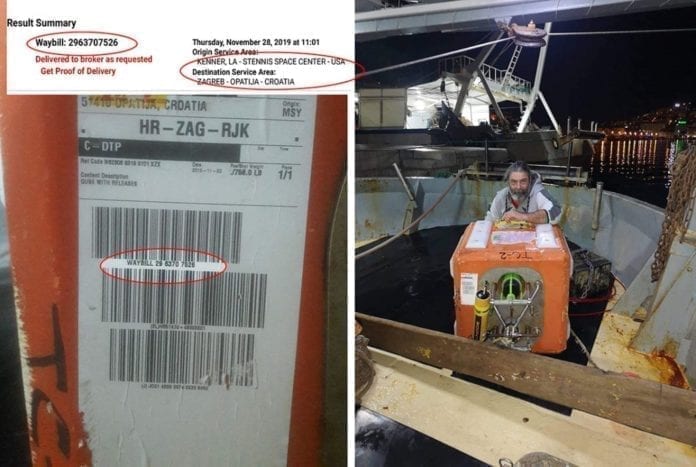 A fisherman from Croatia had an adventure that sounds like the plot of a movie when he ended up having a showdown with another ship. This wasn’t just any ship, however, He was facing down a Navy vessel.

A fisherman from Croatia, Darko Bigava, pulled a strange object from the ocean floor when fishing in the Elaphiti Islands which lie off the southern coast of Croatia. When he pulled up his net he found a large orange box with metal fixtures at either end.

The strange box that he had found was quite large. It was about 1.3 m in every direction and it weighed more than 220lbs (or around 100kg). Attached to this big orange cube was a smaller box measuring about 15 inches square.

Bigava had no idea what this strange object as that he had accidentally found at a depth of about 500 feet while fishing near the island of Mljet. He posted photos of this find on social media to find out what it was. It wasn’t long before his phone rang. When he answered it was none other than the US Navy itself.

Bigava initially tried to identify the object purely because he hoped to find the owner and claim $3,000 to cover the damage caused to his nets by the object. The only clues he had to go on were a buoy attached to the cube and a DHL shipping label on the side of the box.

He approached reporters from Morski to help him locate the owners. During their research, they discovered that the box had originated from NASA’s Stennis Space Center in Mississippi. The box had been sent from the US in November of the previous year and was sent to Zagreb after going through Germany.

Once the story got out, a Morski reader contacted the publication and told them that they had seen the US Navy research vessel Bruce C.Heezen in the area that day. According to the sighting, the ship had been tracking back and forth over a certain stretch of water near Mljet.

Bigava was still waiting to find out what was going on when he received a call on his ship’s radio. To his great surprise, the message he received was coming from a US Navy vessel, demanding the return of the device.

Bigava, however, refused to return the device to the navy. He insisted that they needed to compensate him for the damage the device caused his nets. There was a fair amount of back and forth between Bigava and the Navy.

As difficult as it was, eventually a settlement regarding the $3,000 was reached. The Croatian Coast Guard agreed to pay for the damages to Bigava’s nets. The US Navy would, in turn, recompensate them.

Once the settlement had finally been agreed upon, Bigava navigated closer to the Bruce Heezen. He picked up the device tossed it over the side of his boat. A dinghy was quickly dispatched from the Bruce Heezen to collect and drag away the orange cube.

The strange orange object appears to have been a weight of some sort which had a sonar transponder on one end, and a kind of receiver on the other end. These devices are known as HIPAP systems. These devices are generally used for underwater communication.

They are also used for geolocation which is far more accurate than normal GPS. However, the true purpose of this device remains unknown. Neither the UN Navy nor the Croatian Ministry of Defense would state the real purpose or how it ended up in Bigava’s nets.

The MoD released a statement that said: ‘The Ministry of the Sea, Transport and Infrastructure has granted approval for the testing of marine research equipment and devices to the Navy research vessel Bruce C. Heezen, United States of America. The permit was issued in accordance with the provisions of the Maritime Code.’