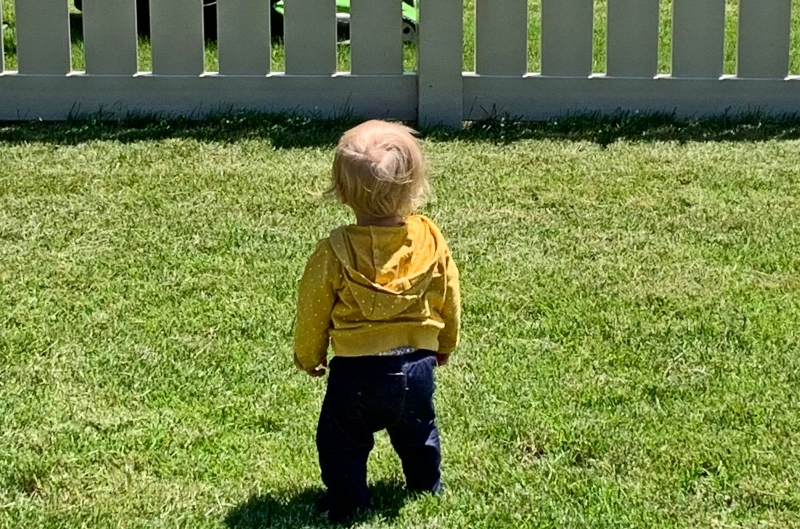 At first, he didn’t think anything of it, it seemed innocent enough.

But soon he’d find that this innocent game would go on for way too long. And it would be a concern more than a fun game. He needed to figure out what was going on, for his son’s sake.

After searching for what felt like forever, married couple Phillip and Jessica finally found their dream house.

The house was far enough from the cramped city that they could enjoy a quiet life whilst not too far that Phillip didn’t have a long commute. Their son loved the big backyard that bordered a thick forest. It was perfect.

Ben, their son, took on a few traits from Jessica, he loved nature and playing in it.

Philip loved watching his son run around in their yard getting exercise in the son. He loved the fence that separated his son from any danger.

Ben had lots of fun whilst being safe, which was the most important thing to Phillip. The fence kept him from wandering off or letting anyone else in.

But one day Phillip noticed one spot where Ben would stand and start talking to seemingly no one.

Jessica called it “kiddo chat” and told her husband not to worry.

They thought that maybe he was talking to his toys, but he was always looking up at the fence. Phillip decided to check up on his son and look over the fence.

Over the fence, it was just a normal forest. Nothing new there.

He saw animal tracks by the trees and bushes. He then asked Ben who he was talking to, to which he replied “Gee Mee Mee’. What was that?

Could Gee Mee Mee have been a friendly squirrel or an imaginary friend? He had to find out.

Phillip knew there were other ways to figuring out who his son was talking to, and after all, his highest concern was his son’s safety.

After digging in a box he found what he was looking for. Old security cameras that he could set up in the yard to see what was going on.

He connected the feed and watched the screen, hungry for answers. He wouldn’t have to wait very long until he found the truth.

He thought about every possible outcome and began to worry. The truth would have him second-guessing himself.

Then his boy appeared just like he always did, then he started talking to the fence.

Phillip soon grinned and felt silly for worrying so much. The explanation was very easy.

He grinned at Ben and then stuck his head over the fence. There, a little old lady stood among the berry bushes, plucking the red fruit with her wrinkled hands and dropping them into an old wicker basket. He smiled brightly and introduced himself.

Nice To Meet You

The old woman looked up and returned the warm greeting.

“Oh, nice to finally meet you. How are you liking the place?” It turned out the old woman had lived in the area for decades. It was quite common for her to walk through the forest and forage off the land. But that wasn’t all.

The berry gathering had been something “Grandma MeeMee” and her husband had done up until he had passed away a few years ago.

Since then, she had found her walks far lonelier. Philip felt a pang of sadness as she explained what was going on with Ben.

His little guy had heard her passing by one day and started a random conversation with the old woman.

His son had really been talking to someone, and Gee MeeMee was so grateful for the “ray of sunshine that Ben gave her every day.” It might have been a simple exchange, but it meant the world to her. As Philip learned more of her story, he grew sadder and sadder.

It turned out that Gee MeeMee had adult children and grandchildren of her own, but they were living their own lives out of state.

She had two children, four grandchildren, and six great-grandchildren, but she hadn’t seen them for years. And when the pandemic rolled across the country, her hopes of them visiting were shattered. She was all alone.

Gee MeeMee was 99 years old. When it wasn’t berry-foraging season, she would spend her days watching TV shows and playing Yahtzee by herself.

Grandma MeeMee told Philip that the most challenging part of living alone was trying to figure out what to do to fill the hours. “Don’t laugh,” she told Philip, “You know what I do?”

“Don’t laugh,” she repeated. “I get junk mail. Then, I strip it up. After I strip it I cut it small, put it into a bag, and put it in the garbage.”

“I have to do something. Otherwise, I’d go nuts,” the old lady revealed. “But enough about me,” she said quickly. “I have something for little Ben.”

She was carrying a laundry basket filled with old metal Tonka trucks. She told Philip that they had once belonged to her son, but she wanted little Ben to have them.

“He passed away, so they’ve been sitting down in the basement for years and years.” When Philip told his wife about the woman, she couldn’t hold back the tears.

Jessica felt touched that her son had made friends with someone who really needed one. Mee Mee had been so alone for so long. “She was all alone,” Jessica said in an interview. “I had no idea.”

It turned out that Ben and MeeMee’s friendship was so much more than it appeared on the surface.

It Kept Her Going

“We learned how much she looked forward to seeing him playing in the yard and how Benjamin kind of kept her going in the pandemic when she wasn’t able to see anyone else,” Jessica said.

Jessica posted the story of the unlikely friendship that had blossomed in their backyard, and it took social media by storm.

“Friendship can just happen so many different ways, Jessica said in an interview.

In the US, around 44 percent of women older than 75 live alone, and the number increases with age. This is mainly because men are more likely to pass before their wives or remarry.

Many elderly people feel an overwhelming sense of loneliness as they age. And the increased social distancing measures are only making things worse.

In older people, loneliness and social isolation actually increase the risk of dementia and other serious health conditions.

In fact, social isolation increases the risk of premature death more than other lifestyle factors – the risk level is higher than smoking, obesity, and physical inactivity. Philip and Jessica knew what they had to do next.

He was already a handy guy, so putting a gate near the back of the fence was a cinch.

It also had a half-door so Ben could open the top part without opening the entire gate. This way, anytime the old woman came along, they could chat face to face. Philip’s wife, however, had her own opinion.

It wasn’t good enough just to open a space in their face.

She wanted to open a space in their home. Gee Mee Mee was welcome to stop over for tea any time she was on one of her strolls. The friendship that bloomed between the four of them was magical.

A Friendship That Transcended Age

More than a year after they first started playing together, Ben and MeeMee still enjoy each other’s company. When social distancing protocols were relaxed, Ben and his parents even attended MeeMee’s 100th birthday celebration!

“I’ve been so surprised to learn how much he meant to her. I had never thought about it or considered it,” Jessica said. “I just thought it was two cute people hanging out together. To know that it’s had such a big impact on her is special.”