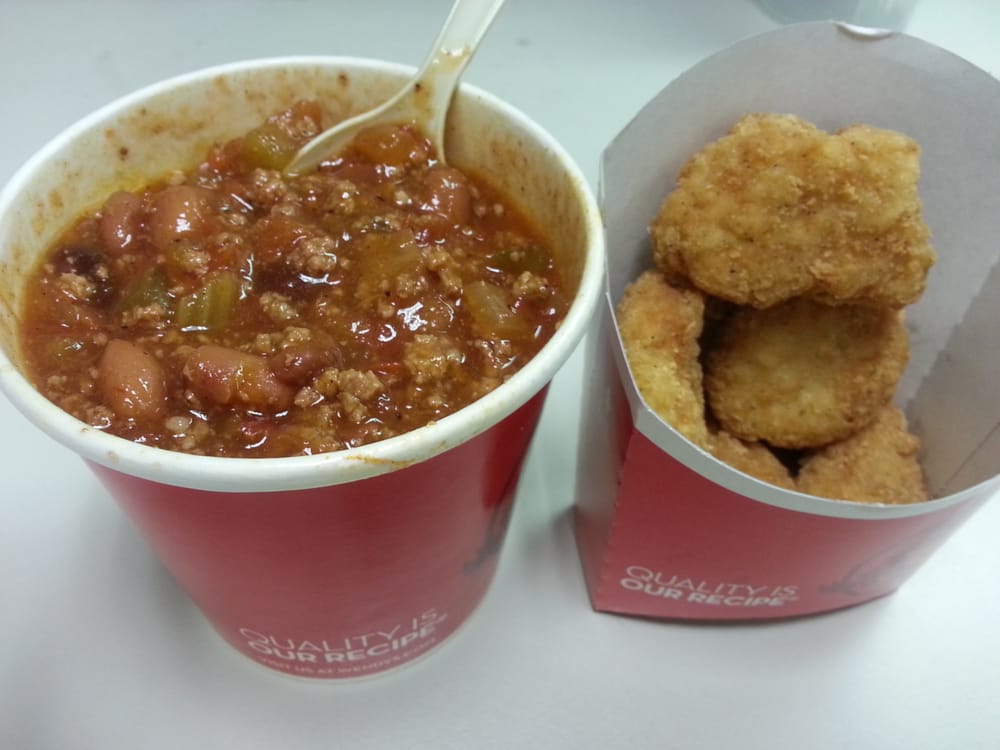 Unhealthy For Other Reasons

We all know fast-food isn’t terribly healthy, however, it can also be bad due to handling, processing, or storing practices.

Users on Reddit had a look at this and employees from numerous fast food companies spilled the beans on which items you should best avoid.

Who doesn’t love a good set of ribs right? Well, next time you think of getting a McRib to satisfy your rib craving, think twice.

McRibs aren’t made of ribs at all. Instead, pig tripe, hearts, and stomachs go into making it.

The idea of something being oven-roasted sounds pretty good. Unfortunately, it’s probably just been thrown in a microwave before being put on the bun.

Sadly, it’s not as healthy or as appetizing as we thought.

One of the biggest surprises on this list. Sadly, it turns out that their fresh donuts aren’t truly fresh after all.

As it turns out, they get delivered on frozen food trucks. How disappointing.

Everyone knows that the McDonalds milkshake machines often break down. What you didn’t know is that the milk base of the milkshakes remains inside the machine until it is fixed. This means that it will go bad.

While these do get cleaned occasionally, it’s seldom cleaned properly.

Any ice cream from a fast food place can be a little bit questionable. It appears that Sonic is no different.

According to one Redditor, very few of the staff ever get properly trained on how to maintain or clean the machines and when this particular user got the chance to, they found it covered in mold.

Nothing better than buttery, garlicky, occasionally cheesy breadsticks right? Well, only if you’re not getting them from Little Caesar’s.

One Redditor, a former Little Ceasar’s manager, claimed that instead of butter they are covered with a butter imitation which isn’t even kept refrigerated.

Burger King’s Chicken Fries are a popular item on their menu. However, these fries are often kept in the open for up to six hours before being sold or thrown out.

It’s also known that they are often more breading than actual chicken.

According to a former Subway worker, the tuna there is, in their words, “literal poison in a container.” According to them it is always slightly past their expiration date.

The fact that it is also mayo-based makes the chances of getting food poisoning even higher.

Just like Burger King, McDonalds is known for their burgers, not for their fish.

So, it’s not surprising that anything other than their burgers will be fresh. This goes for their fish too.

This eventually gets solidified in an over before being separated into chunks and mixed with fat.

Much like the Burger King chicken fries, the super-popular McDonalds chicken nuggets also tend to spend hours under the heat lamps before being sold or disposed of.

So, think again before ordering them.

Unless you are a child, the Whopper Junior isn’t a very popular menu item for the Burger King chain.

So, if you do find yourself craving one, don’t expect it to be too fresh. At least the hours under the heat lamp will mean that it’s hot.

This one will be controversial. The orange chicken is Panda Express’s most popular item, and it’s still not always fresh. Once the rush is over, and the food is sitting out, the chicken starts to dry up, so how employees fix that?

Cover it in some uncooked sauce, of course, just make sure the customers don’t see.

This one’s not super gross or anything, but if you have an aversion to pre-packaged, frozen foods, then maybe avoid literally everything at Starbucks. All Starbucks food has been frozen and reheated.

Nothing is fresh, and it’s all ridiculously overpriced, yay!

Secret menus don’t exist. Your barista will look at you like you’re an idiot if you walk up and ask for something on the secret menu. Find what you’re wanting and then figure out the base drink and add from there.

It will make yours and your barista’s life so much easier.

You’d think that the beans would be something Taco Bell would be known for since they are a Mexican-inspired fast-food restaurant. Apparently not, though.

The beans at Taco Bell are bagged and just require water to somehow turn into the beans we know. Kind of gross.

Okay, so, this isn’t really anything gross. It’s just to help you save your money in the end. According to a former employee, the tacos at Chipotle get you less than half of the regular portion of what you’d get in, say, a bowl.

Just spend a little bit more on some side tortillas and order a bowl. It’ll be more worth it in the end.

You would’ve thought a veggie club would be super healthy compared to other choices, right? Wrong! A 16-inch on 9-grain wheat is over 2,000 calories with super high sodium, fat, and sugar ratings.

You could eat four Big Macs, and that would only be a few calories more (and less fat).

So this veggie burger may not be as meat-free as you would think. A Reddit user who used to work at Culver’s said that the veggie burgers were kept frozen in the freezer until ordered, thrown in a microwave to thaw it, and then cooked on the same grill used to cook regular burgers.

To be fair, most fast food places probably do this.

If you have a craving for this maybe don’t get it anytime around when they close.

You might just get chicken that’s been left under the lights for hours or some that have been dropped on the floor, according to one Reddit user.

Sonic’s chili comes prepackaged in a bag and thrown into a warmer to heat up. Then, it’s left there all day long. There’s no way for you to know how long it’s been sitting there.

Also, if you have food allergies, it may be best to avoid Sonic all-together, as they’re usually sloppy with cross-contamination.

A former employee has said that tuna salad at Friendly’s was only made once a week, along with some of the other things that could be prepared ahead of time.

It’s best to avoid those.

The chili here is basically just overcooked beef that can be kept for up to seven days.

Beware if that’s what you’re craving next time you go to Wendy’s because it probably isn’t fresh.

Little Caesars is apparently guilty of cooking their chicken wings in the same pans as the pizzas for the same amount of time.

This, most of the time results in you receiving mostly raw chicken.

Getting chicken sandwiches anywhere that the main seller is hamburgers is probably a bad idea.

Chicken sandwiches like BK’s just wind up sitting around in the warmer for hours and becoming rubbery and gross. Just order the burger.

An employee dropped the bomb on these barbecue sandwiches. They’re stale. Really stale. The chicken is usually soaked and heated for a full month before being served.

You couldn’t even donate that to a homeless shelter.

Apparently, nobody cleans the blender…

So you might get some extra bits from other shakes and smoothies that were prepared throughout the day.

This burger apparently has a quarter stick of butter in it.

That sounds like Paula Deen levels. Save your arteries some pain, and just leave this one alone.

A former employee has said that the chocolate is left out all day long, the top layer will congeal and get all gross and employees are just told to mix it back in.

The pasta here (yes, even the mac & cheese everyone loves) is microwaved.

Nothing fresh about it. Just frozen pasta that was thrown in a microwave and served out lukewarm.

Any McDonald’s worker will tell you never to order ANYTHING from McCafe. Staff usually aren’t properly trained to service and clean the machines.

So, anytime you order a McCafe drink, odds are your drink is running through a ridiculously dirty machine. So, maybe avoid that from now on?

Fresh eggs, which is usually something you’d want for your bagel, don’t come standard here. In fact, the eggs for Einstein Bros. Bagels are simply microwaved and placed in a warming bin until their ready to be served.

Obviously, you’ll have no way of knowing just how long they’ve been sitting there.

Similar to the pasta, the desserts and pastries are frozen too.

Similar to some of the other frozen treats on this list, the coolatta is usually made in rarely cleaned, frankly disgusting machines.

Wait, wait, wait… Domino’s has sandwiches? Yeah, apparently. And if you didn’t know, believe us, you weren’t the only one. Which is why an employee on Reddit went on to blast these sandwiches, especially the Philly steak or American cheese since those are only used on sandwiches and, like, one pizza.

So the ingredients are always going to be less than fresh on one of these.

A former employee claimed that Sonic chicken isn’t true chicken but didn’t elaborate on what it actually was. However, they did say that the chicken will always sit longer because it’s not as popular as the burgers.

Just some things to keep in mind.

There’s apparently a saying amongst employees about these fries…

They aren’t old until they’re sold.

And most of the shake mixes are sometimes expired.

A former Burger King worker has said that (at least at their location) decaf didn’t actually make or serve decaf.

Their ‘decaf’ was just watered down regular coffee. Not super gross but still kind of shady.

This one’s not gross, but it might annoy you. A worker said that the BLT is super overpriced for what you get.

It’s common for employees to skimp on ingredients (especially the bacon) to help cut costs on their end.

If you’re okay with frozen soups thawed out in a “re-thermalizer” (which is just a sink filled with boiling water).

A former Tim Hortons worker has warned other Redditors about the soups at this popular Canadian chain.

The soups are frozen, and the worker claims to have even found maggots in the soups.

One Redditor has said that Jersey Mike’s chicken parm is the only thing on the menu they wouldn’t order.

The chicken parm is just a frozen, pre-breaded chicken patty that’s thrown in the microwave for a few minutes which makes it super mushy. Yuck.

Though the bowl has changed to make it seem like the portion size is the same.

A former Dunkin Donuts employee on Reddit revealed that the hot chocolate has thickening agents.

These also include Cellulose Gum and Xanthan Gum.

If you get the tea in the morning or early in the day, then it’s probably fine, but former employees warn about ordering it late at night.

The tea is brewed at 5 a.m. by the opening manager and then never replaced throughout the day.

The sweet tea at McDonald’s apparently has one pound of sugar for every gallon. One. Pound. A large has 38 grams of sugar, way over your daily recommended limit.

According to a former Sheetz worker, the grill marks on their burgers are fake.

A former Firehouse Subs shift manager has said that anything other than sliced meat or the meatball sub isn’t worth it.

The steak is usually frozen and super greasy while the chicken is frozen and packaged. All around, not worth the price.