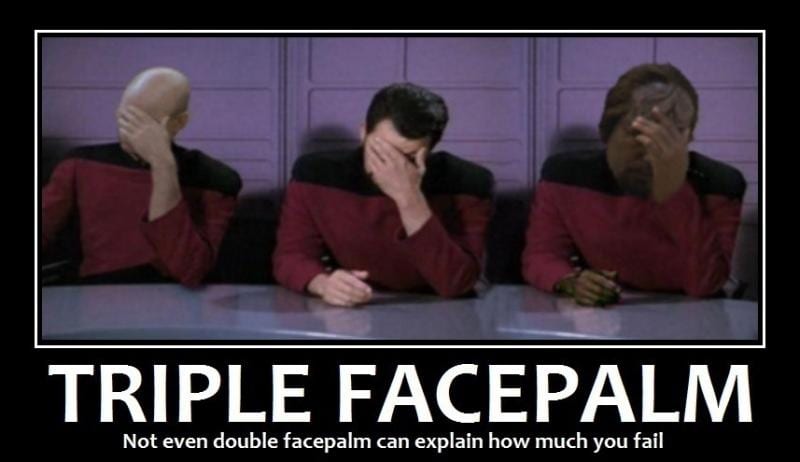 Why is it when someone gets hurt or fails we just can’t seem to look away? Car accidents, arguing couples or someone missing the mark are our bread and butter. In these cases, our best selves take the back seat. We crave entertainment in the form of other people failing. The beauty is, we don’t have to wait to watch these feats of destruction – countless fail videos of people doing stupid sh*t on the internet are ready for our entertainment.

Warning: Do not watch these at work or in a quiet space. You will have a hard time restraining your giggles.

Quality father-son time often includes learning a new sport, sometimes for both parties. Although giant inflatable soccer will likely not be added to the Olympics anytime soon, it sure looks like a whole lot of fun. Of course, when learning a new sport, getting a bit dirty and being prepared for a few injuries are to be expected. This is what happened during a friendly game of soccer. It started with the dad standing next to a giant, inflatable soccer ball. As his toddler approached the ball, Dad gave it a kick and the soccer ball – and toddler – went flying. You’re sure to get a kick out of this video.

This fail video is sure to crack pet owners up everywhere! Meet Kubo, a shar pei with folds for days who is looking to have a cuddle with his owner on the couch. Sadly for him – yet entertaining for us – he misses the jump and ends up falling to the ground. Kubo looks so confident in his jump, but at the midway point, he seems to realize he’s not going to make it. As the video is in slow-motion, you can see as his folds wiggle around – it’s hypnotizing. If you’re looking to check out more videos of this cute pup, follow him on his Instagram page: @kubothesharpei. The good news is that he didn’t seem to be injured after his failed stunt.

There’s nothing more satisfying than seeing justice being served, amirite? In this vid, you’ll see a UPS van deliver packages to a porch. Fast-forward a few moments, and a car pulls up at the same house. A woman gets out of the passenger’s side and approaches the front porch attempting to steal the newly delivered packages. Little did she know that she would walk right into the hands of instant karma. This lady with sticky fingers falls to the ground and is clearly in a lot of pain. After the driver of the getaway car realizes that she cannot get up on her own, he eventually comes to help her. After carrying her across the yard and into the car he returns to the scene of the crime. Sadly, he didn’t get the karma hint, and he steals the package anyway.

As far as fail videos go, this one gets a 10 out of 10. Typically when facing off against your mates in a game of bowling, your aim is to get the most points. This is done by choosing the right ball, having a good stance and firing your ball down the lane toward the pins. So long as it goes down the center – and not into the gutter – you’ll get at least a few points. And, if you get them all down you’ll get a strike, but, sometimes, throwing the ball doesn’t always go as planned, especially in this case. Call the fire department quick, because this teen’s bowling skills are on fire. Luckily, the sprinkler was set off to help put it out. Anyone have a spare ball? Or ceiling?

As the cameraman was passing a large semi-trailer truck, he noticed there was something wrong, or more accurately, something was attached to it. The front-right end of the trailer was blocked by a huge branch hanging over the road. As the driver attempted to simply drive through the massive tree – no it’s not a twig, it’s a tree – he eventually succeeded. After bumping into the branch a few times, he decided to put the pedal to the metal, giving it all the truck had and successfully ripped a massive branch clean off of the tree it was attached to. Keep on truckin’ and good day to you!

Washing machines can be such a pain, especially when you’ve got a large load to wash. You have to wash your sheets, comforters and towels separately, otherwise, it you’ll overload the machine. Then you have to rearrange or take some clothes out, when all you really want to do is be done with the whole process. If you ever wanted to get revenge on your washing machine, then you should invest in a brick – washing machines don’t like them very much. Watch what happens when a washing machine gets a surprise brick thrown in. Here’s a hint: it is totally annihilated.

Babies are beautiful bundles of joy – most of the time. They especially make you go awwww when they’re experiencing things for the first time. Their first steps, the first time they laugh, speak and eat. Parents love it when they start doing things for themselves. In this case, this baby is eating solid foods for the first time. Of course, most are not always successful on their first try. Take this baby, for instance. When given some spaghetti, he manages to get a few bites in his mouth, but for the most part, he definitely misses the mark. Better luck next time, little guy.

Picnics are a blast, especially when you get to enjoy them with a group of close friends. This hilarious video highlights the fun of being with friends and enjoying the outdoors. Late in the evening, one friend in this video thought it would be a smashing idea to break open a mini watermelon on his friend’s face. In terms of fail videos, this one clearly answers the question, “what is stronger, the human skull or a watermelon?” The watermelon proves to be stronger than expected – hopefully, the victim has some aspirin for the next morning. This is one moment that was exquisitely captured on video, though, this guy probably won’t have trouble remembering it.

Were you able to make it through all the fail videos without laughing? We bet not! Which one was your favorite? Do you have any similar videos that make you roll on the ground laughing? Please share them with us in the comments!

Need more YouTube to fuel your vid addiction? Pop by the Top 5 Most Popular YouTubes of 2017.

Must Read
Sleeping Worker Irks Woman, Her Rant Backfires In A Big Way
Man Finds Old Gold Mine On Property, Runs Away When He Steps Inside
Girl Learns Why You Shouldn't Steal Parking Spots