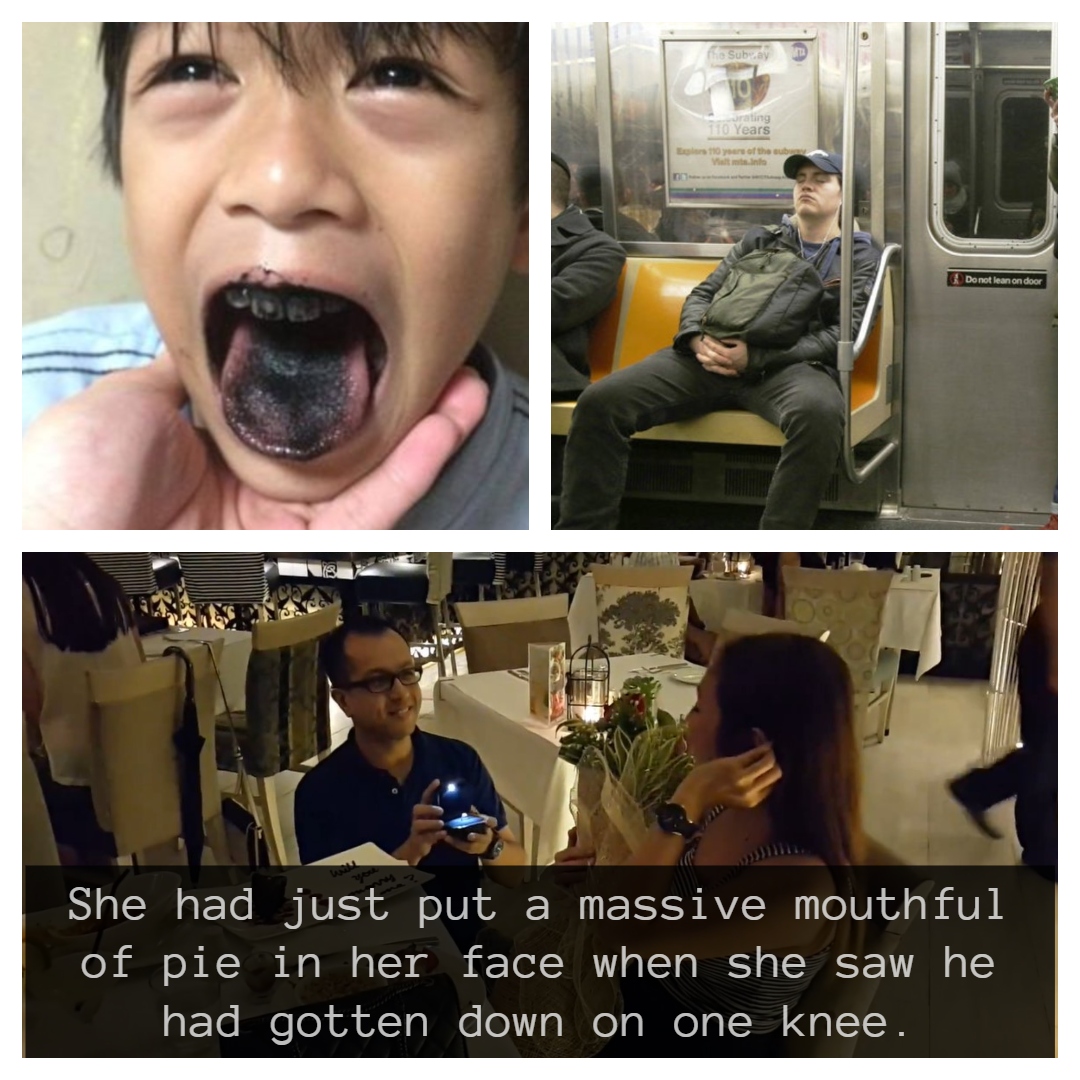 Everyone has experienced the feeling. It was either from a fall in public or not thinking something through before saying it in front of everybody. Embarrassment is something we have all felt, and it’s something that joins us all together.

Let us connect more by reading the most embarrassing moments from people on Reddit who have been brave enough to share their stories.

In middle school, I used to have a bad habit of chewing on pens with sharp tips that came in red, black, and blue ink.

I didn’t know that the tube/body was slightly pressurized, and one day during class, I bit too hard on the pen, making it burst into my mouth. My teeth, tongue, and lips were stained blue for days.

I ran into an old co-worker at McDonald’s. Our tenures had overlapped by about a month, and that was several years ago. He recognizes me, calls me over to his friends, and tells them, “This is the nicest guy I have ever met.” In the next 3 minutes, I called him by the wrong name and asked him how he liked a job he’d never worked at.

It was pretty clear that I hardly remembered him. I was so embarrassed that I got my McDonald’s to go and eat it in my car.

Didn’t Want To Be Rude

The first time I ever encountered someone using a hands-free mobile setup was when I sat down on a busy train beside this young woman who immediately went, “Hey! How are you?”

Somewhat confused, but not wanting to be rude, I said I was fine and asked how she was and got a look of total confusion and disgust before she carried on her conversation with her phone. I’m still cringing about it.

I was 16 with a boat full of 16-year-old boys (I was the only girl.) Very first time wearing a 2-piece. Also, on a Canadian lake. They took me tubing and turned super sharp. I flew off, and my bottoms shot out.

They pulled up in the boat to help me back in, and I was stuttering an excuse. My bottoms gracefully floated to the surface beside me. Putting them back on underwater was really awkward.

I hit face-first into a streetlight lamp post because I was staring (while walking) at a beautiful girl walking in the direction where I was coming from.

It was in front of the main gate of our university. Hundreds of students saw it. My friends laughed so hard.

I had a great day at a water park/outdoor pool, and toward the afternoon, a woman came up to me and whispered in my ear that I had a problem with my swimsuit. I reached behind and noticed a huge gap.

The fabric was torn right in the middle, and you could see my white, untanned buttocks. I was running around like this all day, and no one said anything.

In primary school, there was a school-wide assembly in the hall. I was a sixth-grader sitting on the hard floor with my class. Then I got called up to the front because I’d won an award.

So I proceeded to stand up, but sitting on the hard floor gave me a dead leg, and my foot collapsed under me, making me immediately fall over on top of the girl that was sitting next to me, in front of the entire school. I still get embarrassed thinking about that.

I, unfortunately, didn’t witness it, but my best friend just got engaged, and when her significant other proposed, they were in a little French deli. She had just put a massive mouthful of pie in her face when she saw he had gotten down on one knee.

She was so shocked that she spat the pie out all over herself, all over him, all over everything. She just sort of nodded. It was very like her to do something like that, so it’s all fine, but still, I don’t think he was expecting pie on his face.

Down To His Ankles

I was at my friend’s birthday party in high school and was super drunk. I ran up to a group of people and said, “Watch this!

I then proceeded to run and dive into a bounce house, only for the Velcro-lined entrance to grab my sweats/boxers and pull them down to my ankles. I’ll never forget the looks of horror on their faces while I lay there on my back with my legs in the air.

I was on an airplane years ago with my girlfriend and her parents. My girlfriend couldn’t get a seat next to me and sat directly behind me. I thought I would surprise her during the flight and reached my hand back onto her knee.

Slowly I kept extending it up her thigh until I heard giggling. I looked behind through the seats and saw that my hand was on the leg of the guy next to her. He saw my face and said, “I just wanted to see how far you’d go.” Of course, my girlfriend was in on it and started laughing along with the rest of the row. Was so embarrassed.

I had made a short film that had gotten into a festival, and I had to travel down to Busan from Seoul on the fast train – super expensive. I was looking good, wearing cool clothes, including a pair of leather shoes I had thrifted. Bad mistake.

By the time I left the subway in Busan and walked 100 meters towards the theatre (where I was due to give a speech), the top of one of the shoes was starting to flap. I managed to hook my big toe over it to hold it down, but the sides were now lifting up. People I was passing were starting to notice as it looked like I had a club foot. In the end, I had to take the shoe off and throw it away.

This was during my Sophomore year in math class. I sat between two gentlemen. I was really congested that day and thus pretty tired at the same time. I was resting my head in my hand and hunched over my math book when I felt a sneeze coming. I went to lean back but apparently didn’t move quick enough when the force of this sneeze sent my face hurling into my desk.

My head smacked the desk so hard that I bounced back up like a basketball. At that point, I was just dizzy and like, “Uhhh….”. Meanwhile, the two guys next to me just completely lost their composure. The one on the right is howling with laughter. The one on the left has his face in his hands and is snorting. The teacher looked at us so confused, and all I could say was, “I sneezed.”

In my sophomore year of high school, I had a crush on a girl with whom I had a class. We’d talked a few times, but I didn’t know her that well. It was around Valentine’s Day, and our school did a thing where you could pay $10, and student volunteers would sing a song you picked in class to whoever you picked and give them a card.

So they announced who the Valentine was for, and she blushed, I’m sure assuming it was from her boyfriend. They started singing, and she blushed harder. They handed her the card that I had written my name on, and her face stopped being pink and went far redder. She looked over at me, and all I could do was shrug. After they left, she said out loud, “But Chuy, I have a boyfriend!” and then everyone knew it was from me. I just muttered that I’d found out too late and happy Valentine’s Day, and I’m sorry.

I was in kindergarten and was playing in the sandbox at recess one day with my friend. We were making a sandcastle but didn’t have any sand that was wet enough to form a solid structure. I had been holding my pee for a while, and being five years old, I didn’t want to stop playing, so I let it out while I was sitting and promptly let my friend know that I had magically found some wet sand that we could build with, and no one was the wiser.