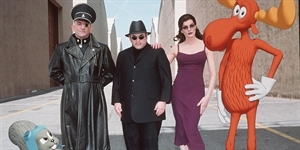 If there’s no truism that every good actor makes a film like “Gigli” at least once in a career, there should be. They have all done it. Al Pacino was somehow snookered into appearing in “Jack and Jill,” one of the most obnoxious and insulting Adam Sandler vehicles of all time. For Jon Voight, it was “Superbabies: Baby Geniuses 2.” Even the great Laurence Olivier made an awful Unification Church propaganda film called “Inchon.” We’re not sure why, but it appears to be a universal truth that all good actors wind up making one of the world’s worst movies at some point in life. Here are five very notable ones.

We get it with John Travolta: He’s a well-known Scientologist, and this terrible, terrible film is based on an L. Ron Hubbard novel of the same name. He thinks he’s created something of profound spiritual import or something. But Forest Whitaker does not have this excuse, at least not to our knowledge. Travolta plays a giant evil alien with dreadlocks and tubes protruding from his nose—he’s working with an assistant played by Forest Whitaker to destroy the cave-dwelling humans left on earth. The Church of Scientology assumes that we just don’t get it, and we suppose we agree with that assessment.

Fourth part movie franchise installments are never really a great idea. At best, they’re like the uninspired but passable “Indiana Jones and the Kingdom of the Crystal Skull”—or even “The Hobbit.” But it has to be stressed that those are best-case scenarios. Most fourth part franchise installments are more like “Jaws 4,” which isn’t even passable enough to appear in a marathon of terrible B-movies on Syfy. To put this in perspective: It’s not even as good as Debbie Gibson’s “Mega-Shark vs. Giant Octopus.” Caine, for his part, does as much as he can with this material, which includes lines like, “It’s a big ocean out there” and, “If I go any faster this thing will turn into a flying Cuisinart and we’ll all be diced into oblivion.” But at least it’s possible to derive some comic relief from the hideousness as you watch—that’s more than we can say for the other 1987 disaster at No. 2.

This movie is terrible, and Eastwood’s performance doesn’t elevate it one bit. Based on a mediocre Broadway musical, “Paint Your Wagon” admittedly gives Eastwood little to work with. He’s an awful, inept singer—think worse than Russell Crowe in “Les Misérables.” His biggest musical number, called “I Talk to the Trees,” finds him, well, talking to trees and singing off-key. We’re not sure which was more embarrassing for Eastwood: singing to trees or talking to a chair at the Republican National Convention. And by the way, there’s no reason for a single off-key note in a movie—you can practice until you hit the right notes! It’s a travesty that Eastwood’s people allowed him to get involved in this embarrassing dreck in the first place. It’s doubly so once you’ve heard this man sing.

If you’ve seen any parts of this film, you recognize that “Innocence of Muslims” may not actually be the most offensive film ever made about Muslims. This one, widely considered one of the worst films ever made, certainly comes close with its unchecked Orientalism and depiction of Arabs as uniformly bumbling, untrustworthy liars. We know this film was made not long after “Back to the Future” depicted Libyans as terrorist thugs, but the ethnocentrism here goes even beyond that. Absolutely everything about this movie is wrong, starting with the fact that Beatty—whose claim to fame is not comedy—wrote, directed and starred. The film was highly publicized and very expensive. The only justice is that it was a critical and commercial flop. Good actors have lost careers over lesser offenses than “Ishtar.” We’re not sure Hoffman learned his lesson—he keeps returning to that horrible Fockers franchise.

We’re still not sure how De Niro of all people became associated with this movie. Maybe he wanted to do something silly, something blatantly against type. We don’t fault him for that; we fault the agent who should’ve known better. Because we remember that De Niro is one of the all-time worst guests in the history of “Saturday Night Live,” we half-suspect that comedy just isn’t his thing. Maybe he doesn’t have any of the right instincts for it—and in that case, he should never be allowed to choose a comedy script for himself. It’s one thing to play against type, but quite another to do so by virtue of a terrible performance in a uniquely terrible movie. And what is it with Hollywood legends who’ve made bad comedies in the past getting involved in the Fockers movies?
Must Read
Just Food For Dogs
Man Vanishes After Winning $326 Million
Married Couple Trying For Baby Learn They're Twins