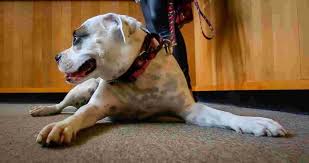 There are only a few things that are more stressful than testifying in court. This gets much harder if you are the victim. The courtroom is so overwhelming, with the judge sitting above you and all eyes scrutinizing every single one of your movements, that people tremble, sweat, cry, and even want to shout. If that is so hard for an adult, can you imagine how it must feel like for an innocent little kid to be standing in front of the people who wronged them in court?

This is one of those heartbreaking stories where this happened to a young little girl. The only twist in this story is that when the time came to testify, a dog helped her in the most unexpected way possible. 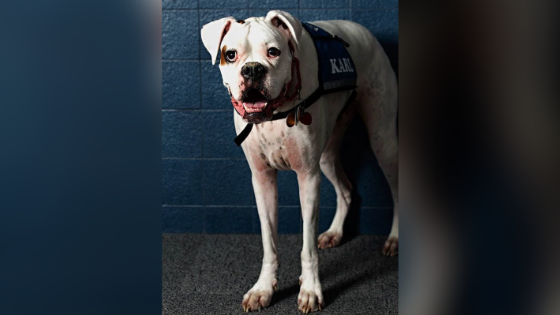 The little girl was so shaken that to testify that her body froze and she was unable to move. She even lost her voice before a small dog helped her regain her confidence and change her life forever.

Here is the story of this dog.

The New Hero: Karl The Boxer 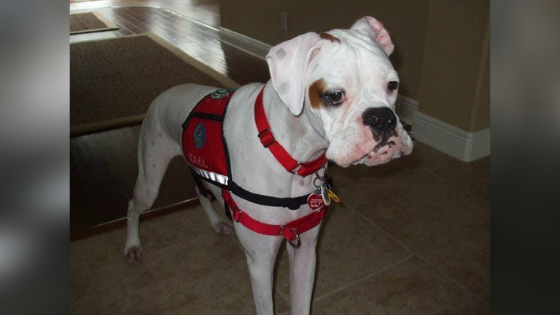 You won’t meet many dogs that are like Karl. This 5-year-old service dog works with many children to help them overcome their fears. He intervenes in some cases when kids need additional support from a non-threatening and judgment-free furry companion. Service dogs like him are trained to feel humans’ feelings better and help soothe them.

The Orange County’s K-9th Circuit Program pairs up those therapy dogs with kids who need emotional support and are going through tough times. In the case of the little girl, it was Karl who was her lucky companion.

The Weird Case of Karl, The Deaf Dog 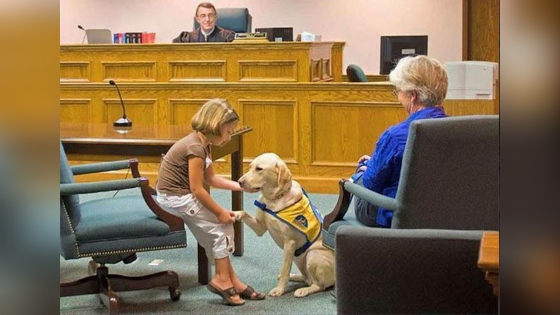 Karl is a real gem: he was born deaf and was nearly euthanized for it, and yet went on to help many kids with their cases.

This particular feature made his training a bit more difficult. However, his deafness made him particularly suitable for the job he has now. Normal dogs would be triggered by the different sounds of the courtroom, like banging or sobs, however, Karl would easily get past them since he’s deaf. He keeps his cool even when things get heated around him.

Karl And His Involvement in the Community 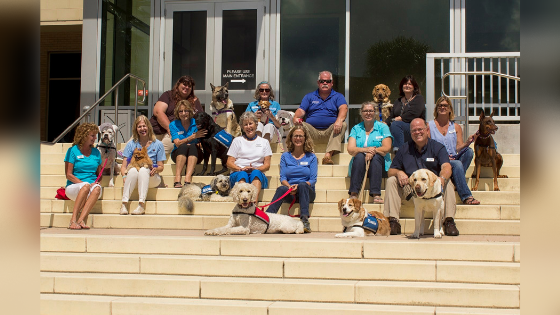 Karl is part of the Companions for Courage. This non-profit works with the courts in Florida’s Orange and Lake counties to help child victims of abuse by providing them with a special Therapy Animal.

The volunteers and therapy dogs of this NGO help give courage to the kids by accompanying them into a courtroom, a deposition, counseling. They also help kids who witnessed a traumatic situation like the death of a loved one, abuse, loss of home.

Karl is a hard-working little fella, wearing his adorable blue cap to court every day and staying next to kids the whole time. When they see him and pet him, they start feeling better. However, his deafness made one thing a bit more difficult in this trial. We need to know that deaf dog story in order to understand why. 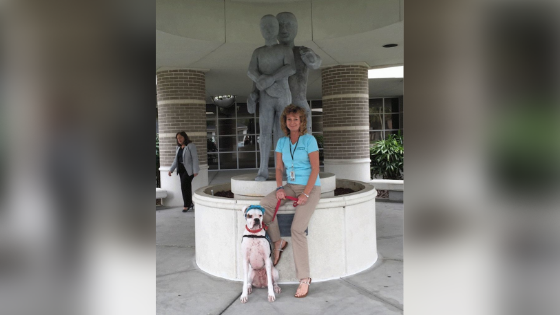 Since he was born deaf, Karl had quite some trouble adjusting to his training. His disability stood in the way of him understanding the traditional human companion’s instructions.

Shouting commands and yelling out words yielded no result, which is pretty understandable considering his situation. The solution? Training him using a brand new approach. How to do it though? They weren’t sure, but they knew that it would involve eye contact. Where to start? It was Karl himself who showed them the way! 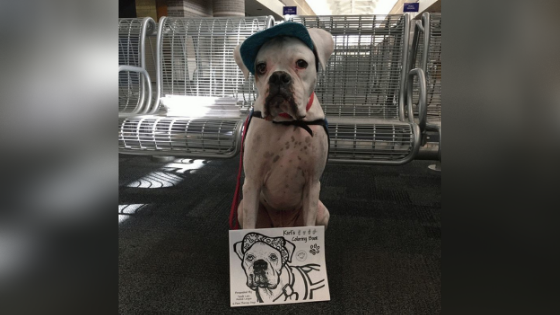 Karl had impaired hearing, that bit is true, but he also had many other qualities that don’t need to be overlooked. The boxer learned quite quickly to respond to commands that were based on signing. You will be surprised to know that he learned to recognize the American Sign Language and could interpret what his trainer has signed him!

Once his trainers realized this gift, they understood that this was a new path to engage on to complete Karl’s training. They then swiftly changed their tactic to make the dog a fully functional service dog. However, a new obstacle rose when it came to dealing with children.

Karl And The Kids 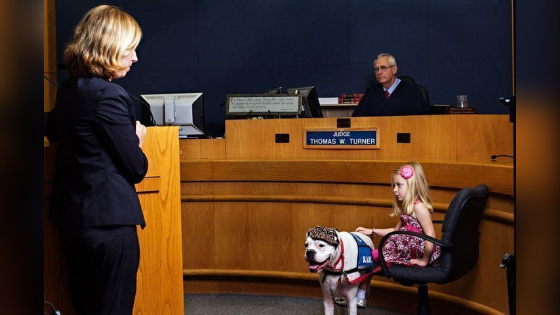 While his trainers could have been fluent in sign language, there were very slim chances that the children Karl was working with would know it. Consequently, the communication mechanism the trainers had designed wasn’t as complete.

Karl might have been an affectionate pet, but it was vital that he understood what the kids told him. That meant going back to the drawing board, and the trainers decided to try something a bit more unusual. 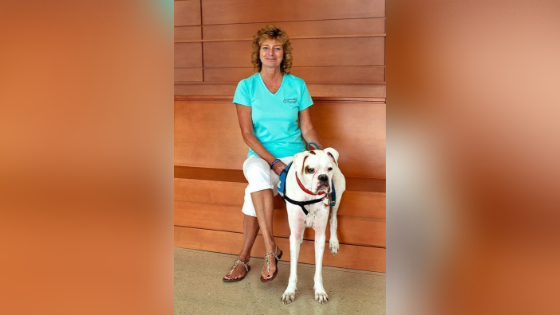 American Sign Language is a series of hand gestures that one needs to memorize. If Karl was able to interpret it, that meant that he should be capable of understanding other patterns of hand signals too. Thus began the real training in the deaf dog story.

The trainers came up with a new hand gesture system that was simple enough for kids to grasp and for Karl to learn. Communicating with him this way proved to be effective and smart. Kids could rely on him, especially a little girl who needed him greatly. 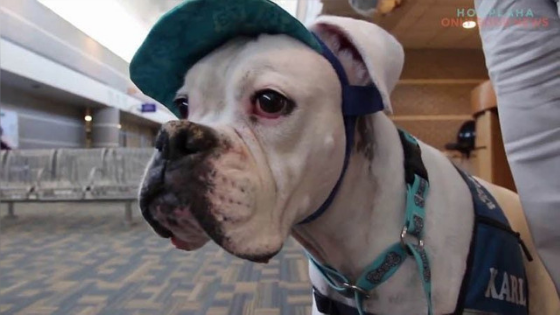 As stated above, Karl works with children who had witnessed abuse, or worse, had been abused. When it comes to testifying in front of a room full of their abusers and strangers, the pressure gets so high that it is difficult for them to speak up.

This little girl was particularly fond of Karl. She had faced two depositions and a trial alongside him since he was her designated service dog. He was next to her at all times, making this experience easier for her. 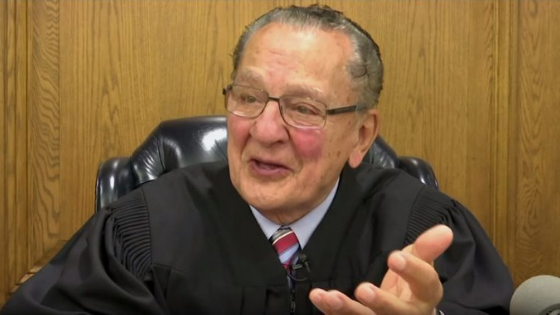 The hearing date is on a whole other level of emotional turmoil. No matter how one can prepare to face their abuser, it is still a dreadful moment when it actually happens.

It was what the little girl felt at that time. When the man took the step into the courtroom, she was so overwhelmed that she froze. When it was her time to speak up and take the stand, she was paralyzed and couldn’t move. Talking about her experience in front of him was then extremely hard.

Reacting to the Gesture 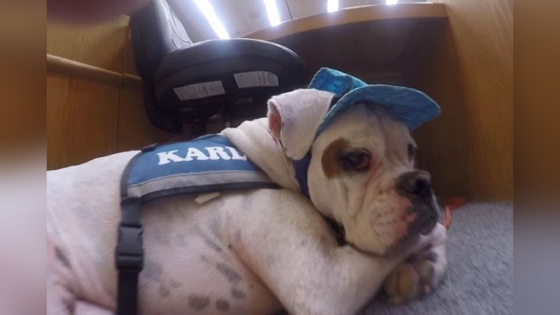 Still shivering from the overwhelming situation, the little girl still had the presence of mind to remember the gesture she had to show Karl. She signaled him to come by her side and sit, and the dog followed her instructions to the letter.

The judge understood that the little girl needed a better atmosphere to calm down and everybody tried to make her feel at ease. The girl did indeed feel better with Karl remaining calmly by her side, so she felt like she could share her story. 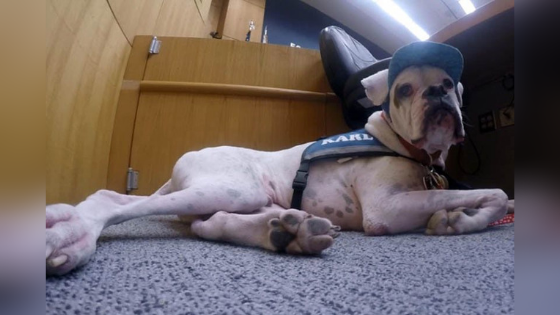 When she calmed down, all the things she had prepared came back to her. She spoke about her experience with Karl calmly by her side during the entire process.

Hours went on with the girl on the witness stand, and Karl never left her side. He was sleeping next to her the whole time. When she needed to pet him to feel his soothing energy, she couldn’t reach him, so she kicked off her shoes and ran her toes through his fur. His presence made her feel more secure. 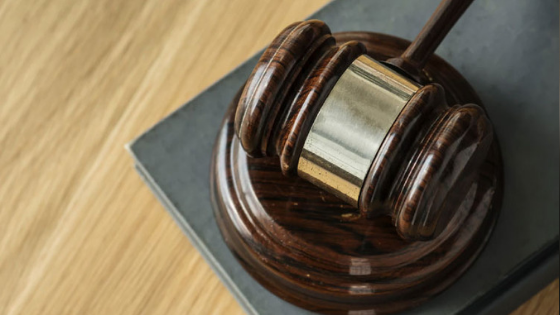 After hours of testifying, the first most difficult part was over. The next most difficult and decisive part was about to start next. Fortunately, thanks to the work of everybody involved, the verdict was given and the court ordered that the man should be locked up.

This was a new beginning for the girl and her family and one less bad man threatening innocent souls. After this stressful event, the deaf dog story became widely popular due to Karl’s unique qualities.

The deaf dog story went viral after being covered in the news and spread on social media. Not only was the highlight on him, but it shed the light on the work of the K-9th Circuit Program and the amazing work they do for the community.

Everybody welcomed this unforeseen exposure, be it the organization, the trainers, as well as the therapy dogs’ owners. Now you know that kids could get help from this organization and you could spread the word about their work too. 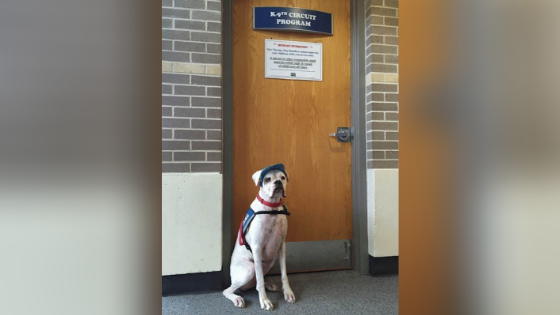 The courtroom experience is still an extremely dreadful experience, and its emotional trauma could be hard for the kids to handle on their own. So Karl’s job is also to be with the kids for additional support, for as long as they need it.

Karl can even help kids outside of the courtroom. They can schedule visits to meet him.

Not All Heroes Wear Capes, Some Wear a Blue Cap 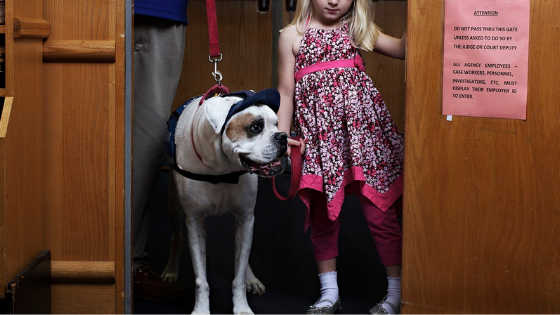 Karl is an inspiration to us all. He proves that there is a way around difficulties and that small gestures can change a person’s life for the better.

Despite his impaired hearing and difficult interactions with humans compared to other dogs, he proved that with a little ingenuity from him and his trainers, he can make many kids get through difficult times.

Thanks to Celebs Pulse for their original article.

How about you, have you ever met or do you have a pet that changed your life for the better?

Read our next article to discover how a woman was left dumbfounded after she discovered the real value of her grandmother’s painting!