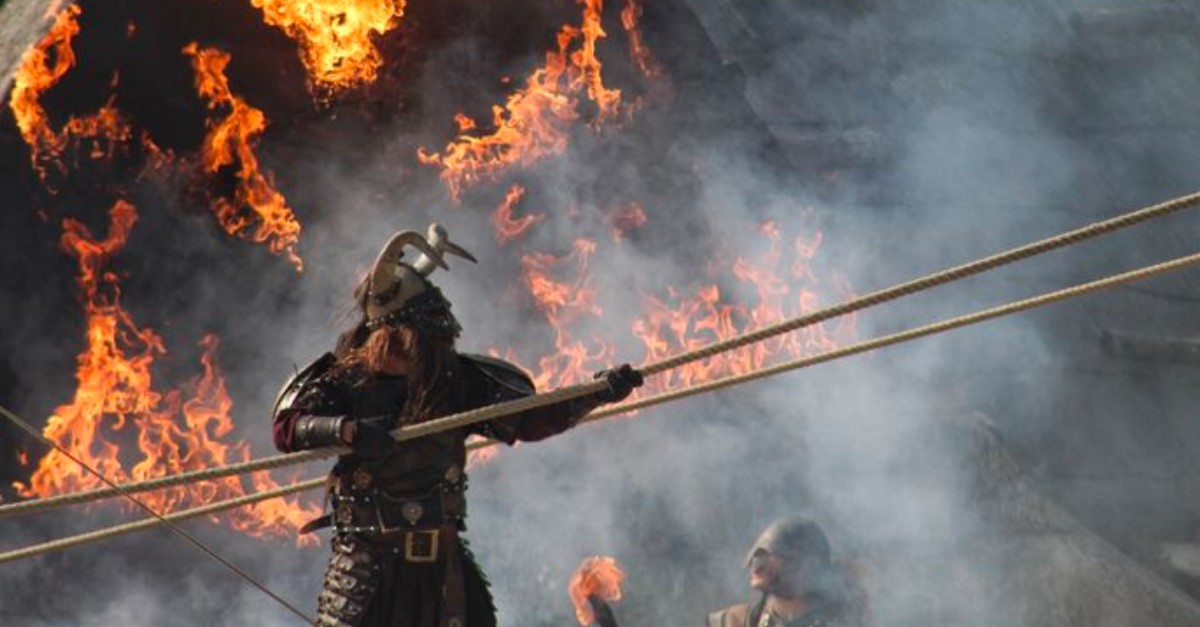 Yells echo through the bay as boots hit the ground. Clangs of metal on metal ring out as the burly, blue-eyed men storm the quiet English beach.

With their long blonde hair billowing behind them and their swords at the ready, the raiders paint a terrifying picture. Soon, the locals are screaming. But there’s something very wrong with this picture.

Of course, Vikings did exist, and their terrifying raids were the stuff of nightmares. However, new research points to the fact that Vikings were actually very different from what movies and history books have led us to believe.

This groundbreaking research into the Vikings’ genetic make-up has uncovered a very different picture that could change history.

In 2020, Professor Eske Willerslev led the study that’s changing history as we know it. Willerslev is the director of the Lundbeck Foundation GeoGenetics Centre in Copenhagen, so he’s no stranger to genetics.

His new findings are changing perceptions of who the Vikings actually were – so much so that the history books will need to be rewritten. So, what did he find?

A team of scientists from England and Denmark extracted 442 bodies from various Viking cemeteries across Europe. These remains were scattered from the Scottish Orkney Islands, all the way to Estonia.

The team of scientists examined the remains using the latest DNA analyzing technology to try and sequence the genetic material. The results were nothing short of astonishing.

It turns out that not everything that we thought we knew about these fierce outlaws is correct. However, there are some facts about the Vikings that we do know.

We know that Vikings originated in Scandanavia and that they lived both inland and by the coast. They were farmers and fishermen. So why, then, did they develop such a fierce reputation?

The Reign of Terror Begins

The Vikings were incredibly innovative. They harnessed the power of the wind with sails so that their boats didn’t have to rely on manpower alone.

It wasn’t long before they were equipped with fast-moving vessels – perfect for sea crossings and coastal raids. But what exactly prompted them to begin their reign of terror? There are a few theories.

One popular theory is that the Vikings simply ran out of resources. With limited tracts of fertile land, their villages quickly became overpopulated, until eventually, there wasn’t enough land for agriculture to go around.

Another theory is that traders told the Vikings tales of wealth overseas and they couldn’t resist the temptation. Or, perhaps, warring chieftains had sent some of the Vikings to seek greener pastures. Whatever the reason, we know that the Vikings put fear in the hearts of many from 150 A.D. to 1050 A.D. But new information is changing all that.

Unfortunately, we know very little about the Vikings because there were very few written records. However, we do know that Vikings believed in Norse gods and that their belief system strongly revolved around dying honorably in battle.

Dying in battle was the greatest honor for a Viking – Viking warriors believed that they would earn a place with Odin in Valhalla in the afterlife. But Professor Willerslev’s new research has provided some shocking insights that challenge everything we know.

The team of scientists exhumed the remains of 442 Vikings – which were largely bones and teeth – from burial grounds across Europe. Then they compared the DNA to existing data from 1,118 people who lived around the same time, and with 3,855 people who lived more recently.

While what the DNA data revealed was astonishing, more discoveries were made at the burial sites.

A Viking burial site In the Scottish Orkney Islands contained two bodies. The gravesite had all the hallmarks of a Viking burial – replete with ceremonial swords. But the DNA analysis revealed that these two men weren’t Vikings at all – their DNA pointed to Ireland and Scotland.

So, it would seem that the Vikings weren’t all Scandanavian. But there were more surprises to come.

The next discovery was that the Vikings seemed to be divided into three separate groups according to their genetics. The Vikings who raided the English were actually from Denmark. The Vikings that traveled across the Baltic Sea were from Sweden, and the Vikings of Greenland, Iceland, and Ireland were from Norway.

And these three groups of Vikings hardly ever intermingled. But this research was just scratching the surface of the mystery. The reality was something no one could have predicted.

“No one could have predicted [that] these significant gene flows into Scandinavia from Southern Europe and Asia happened before and during the Viking Age,” Professor Willerslev excitedly explained, “this study changes the perception of who a Viking actually was.”

What we imagine about Vikings from television and books is that they were all connected, trading, mixing together, and going on raiding parties to fight kings across Europe. So, who were the Vikings, really?

Who the Vikings Really Were

Well, for one, the Vikings were not all blue-eyed and blonde-haired because their genetics had Southern European and Asian roots – most of them would have had dark hair.

The Vikings also took part in cultural exchange – exporting beliefs, practices, language, technology, and socio-political structures across America, all the way to the Asian steppe. So, it seems that the Vikings were about much more than pillaging, raiding, and looting.

Furthermore, Viking identity wasn’t exclusively for those with Scandanavian ancestry – as shown by the remains found at the burial site in Scottish Orkney. In fact, the Vikings seem to have been rather social.

The University of Bristol’s Dr. Daniel Lawson explains: “The Vikings have an image of being fierce raiders, and they certainly were. What was more surprising is how well they assimilated other peoples. Scottish and Irish people have integrated into Viking society well enough for individuals with no Scandinavian ancestry to receive a full Viking burial – in Norway and Britain.”

The new DNA studies have painted a rather different picture of the Vikings than we’re used to, and it’s very different from what is depicted in books and on TV. The Vikings loved to intermingle with Europeans, and they influenced and took inspiration from every culture they interacted with.