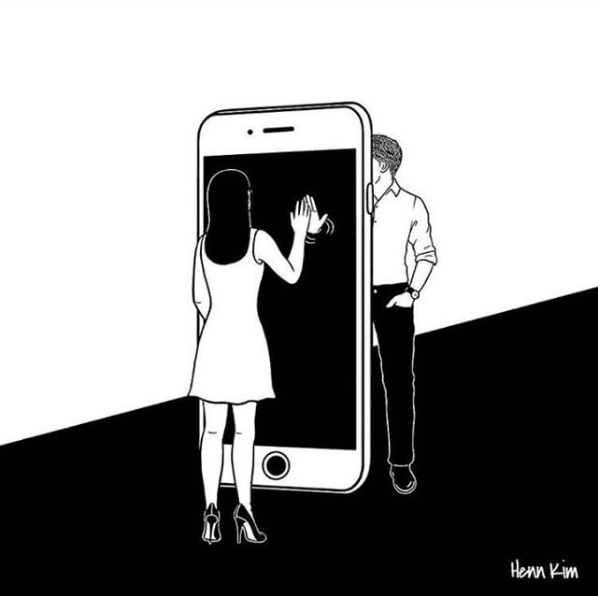 I mean, who can say no to an endless pool of possible partners, ready for review at the click of a button? Plus, God knows it feels nearly impossible to meet someone in real life unless they’re a coworker – which is dangerous to pursue on many different levels – or at a bar, in which case you’ve probably both enjoyed a few beverages beforehand and may discover your connection hada lot more to do with liquid courage than fate. And okay, let’s be honest. Swiping is really freaking fun.

So if you’re looking to start using dating apps for the first time, or try out a new one (don’t lie to me, I know you’ve already swiped through everyone in your geographic range on Tinder,) we’ve got you covered. Between these five different dating apps, you’re sure to find the kind of connection you’re looking for.

Okay, so you’re a little pretentious when it comes to dating. There’s an app for that.

The League is exclusive, and it wants you to know it. When you first download the app, it does not immediately throw you into the dating pool. Instead, after making a profile that connects to both your Facebook and your LinkedIn (yes, you read that correctly) you are put in a queue to be reviewed and approved … if you’re even lucky enough to have The League in your city yet. Once you get to the top of the queue, you have to be accepted, and only then do you start getting introduced to two or three suitors every day at 5 pm: just in time for happy hour!

But The League is not only selective, it’s also demanding. If you don’t reply to your matches or rarely message first, your “League Score” decreases. The same goes for failing to check the app regularly – you can even get eventually booted off. If you start seeing someone new or want to take a break, you can pause the app, but it’ll cost you 99 cents … so think twice about how much you care about your obscenely high standards before taking the time to sign up and perfect your profile.

Tinder is kind of the mother of all dating apps, and therefore the most basic when it comes to the information you’re providing. A Tinder profile includes your first name, age and a bio with whatever you feel like would best present your personality to whoever may be on the other side of the phone screen.

After selecting preferences like the age range and proximity you want your matches to fall in, you’re ready to start swiping on other singles in your area. The one thing you should keep in mind is that the dynamic on Tinder has changed a bit in the five or so years since it took off. In my personal experience, current Tinder users are less focused on meeting people to date and more interested in connecting for a quick hookup … so if that’s you, more power to you. And if not, it doesn’t mean you shouldn’t give Tinder a try anyway. It does have its success stories!

Hinge sells itself as “the relationship app”: the one you should download if you’re looking for a boyfriend, never just a hookup. And the app is designed accordingly – when you sign up, it asks you not only the basics of who you’re interested in matching with, but whether you have kids, want kids, drink, smoke or use recreational drugs, taking a lot of possibly awkward future conversations out of the mix right away.

It also focuses on matching you with Hinge users with whom you already share Facebook friends, under the premise that you’re meeting “through friends” … which is a little less intimidating than just matching with a random guy.

Plus, Hinge allows for much more personalization than your average dating app. It allows you to pick which prompts you want to answer on your profile, with options like sharing your “typical Sunday,” what’s on your bucket list, the most embarassing song on your Spotify and what you “won’t shut up about.” This means you not only get an idea of what your possible date is like from their answers, but also from which prompts they felt showcased their personality best.

When Bumble first burst on to the dating app scene, it was hailed as the “feminist” option because only women can start a conversation with their matches – meaning all of the creepy and unwanted messages you received from jerks on Tinder were no longer an issue, and the guys you matched with were usually looking for a little more than an immediate hookup.

Just like Tinder, Bumble shows you users who are within your selected range of distance. But as Bumble has risen in popularity, it’s evolved into what Tinder had been when it first started: the dating app everyone you knew was also on (so there’s a wide selection of users and nothing to be embarrassed about if you see your coworker), but not the dating app you go to for a guaranteed date.

(Pssst … Bumble also has options for users who just want to meet friends, which can be super-helpful if you’re new in town, or even network without fear of sexual harassment!)

Just as Bumble was the go-to app for actual dates when Tinder was at its most popular, Coffee Meets Bagel is a relaxed, easy way to meet suitors who don’t immediately want to know “wyd rn?”

Similarly to Hinge and The League, Coffee Meets Bagel tries to match you with users who meet your preferences, not just those who are within a five-mile radius. Every day at noon, male users are sent up to 21 profiles of women they may like based on their profile answers. Then Coffee Meets Bagel selects the best potential matches for its female users from the men who expressed interest, meaning every profile shown to straight women is of a man who has already liked her. The concept, called “Ladies Choice,” was launched in 2016 (and no, it does not exactly account for the app’s LGBTQ users … although they did start getting multiple “quality” matches a day with the change, instead of the previous one match.)

But if all of that feels too suffocating and you think you have a better idea of what you’re looking for than any dating app algorithm, Coffee Meets Bagel also has a “Discover” section that shows you users who may not meet your preferences, but are in your area … and if you’re a woman who likes to make the first move, in “Discover,” you can like him first.

Caught the love bug? Check out our list of most popular dating sites! Who says you can’t try all of them?