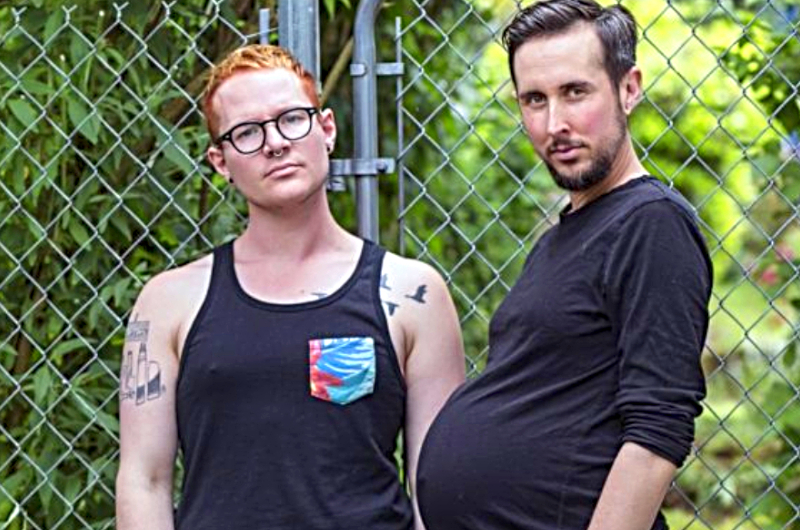 He felt pain course through his body, but why? He had only just been on the road to recovery. What was going on?

He looked down at his baby and handed it over to his husband. There was something going on, but what? They went straight to the E.R. to get an ultrasound. But they couldn’t have guessed the reason for everything.

Mark’s dream was to have kids of his very own one day. He wanted a house full of laughter and a yard full of happy children.

He could only imagine how amazing holidays as a family would be. They’d get all of his love and affection. But there was one huge obstacle in the way of his dream.

At 21 years old, Mark began the process of transitioning from a female to a male. He undertook testosterone treatment and was told that the likelihood of him falling pregnant was very slim.

Although it was a hard pill to swallow, remaining a woman was even harder. He had no choice but to take his chances.

Mark felt an immeasurable amount of relief as he watched his body slowly change. Finally, he was beginning to feel more like himself. It was as though he could finally breathe after being trapped underwater for so long.

His internal battle was nearing an end. Little did he know, it was actually just beginning.

When Mark met Jeremy, another transgender male, they instantly became best friends. But the friendship didn’t last long as they quickly fell head over heels for each other.

When Jeremy proposed, it was one of the happiest days of Mark’s life. Mark was getting everything he ever wanted and now, just one thing remained.

Mark and Jeremy had heard and experienced some of the nightmare stories about coming out or being transsexual. They were understandably scared.

Still, the deep rumble of their biological clocks eventually won. They wanted a family. If only they had known then the unbelievable event that was coming their way.

Mark quit his hormones and they tried for months. Through it all, he worried if his body was ready or willing.

After a couple years, just when they were about to give up, the stick showed a double line. They were pregnant! It was also then that the hate started to roll in.

Mark had been so excited about their announcement but he and Jeremy decided to keep it within their close circle of family and friends.

They knew that news of a pregnant man in town would do more than raise a few eyebrows. They wanted to enjoy the magical moment before gossip spread like wildfire.

Mark didn’t imagine it would spread outside of his friend’s circle. But one morning, cruel messages of hate from strangers and wishes for deformed or passed offspring piled up through social media… and didn’t stop.

Every night he went to bed bawling. It was a late autumn evening when his water finally broke.

But when they looked at their little baby boy they couldn’t help but cry with tears of joy. They forgot about the nasty comments at the moment just felt pure happiness.

He felt his heart beating through his chest. Things looked okay and they could take him home. But shortly after on a normal evening Mark felt pain, something was wrong.

It was waves of agony that flowed from his back to his lower abdomen. He slid onto the floor, feeling like he was going to pass out.

Fear and confusion clouded his mind and he yelled out for help. He waited for Jeremy to come to him while he clutched his stomach. Something very strange was happening.

Jeremy rushed to his side, flying straight into panic mode. He asked him what was wrong but Mark couldn’t answer. He had no idea what was happening to him.

Jeremy rushed to the phone and dialed 911. They both had the same, terrifying fear – the pregnancy had done something to him.

Mark’s head was spinning all the way to the hospital. The pain peaked and he threw up all over the paramedics. By the time he was wheeled into the examination room, he was bawling.

He couldn’t even feel the ultrasound wand as it slid over his belly. The nurse’s eyes turned wide and she leaned in closer to the monitor. “It can’t be,” she muttered.

Jeremy asked the nurse what was wrong but the nurse refused to answer. Instead, she raced out of the room and raced back in with another doctor in tow.

The two professionals examined the screen again with bewildered looks plastered across their faces. Something was seriously wrong.

Mark’s mind raced with worst case scenarios. Was he dying? He couldn’t be! He had to watch his daughter grow up. His heart wrenched at the thought of missing anything.

He thought of all the wonderful moments he would never get to be a part of. He started to cry, reaching out for Jeremy’s hand. Whatever this was, he knew it was serious.

Jeremy was hitting boiling point. He walked straight up to the nurse and doctor and demanded they tell him what they saw.

The nurse turned to him and then looked at Mark, “You’re having contractions”, she said. Jeremy stood straight and gaped. “That’s impossible,” he said. “We JUST had a baby.”

The nurse checked again. “Yes. You’re having twin girls.” Even if Mark wanted to argue, he was already too exhausted from the pain. He felt the gurney move and then the familiar coldness of the medical stirrups. It was time.

After six hours and fifty-three minutes, two little angles arrived into the world – healthy and happy.

The dads, however, needed answers. How was any of this even possible? The doctor came in, also looking surprised. “Well, Mark, I’ve honestly never seen this before. But … it seems you’re very unique.”

“You have two uteruses. It’s called double uterus or uterus didelphys.” Mark held his twins and shook his head.

“But we had ultrasounds. We had so many checkups!” Jeremy said. The doctor went on to explain the rarity of the condition.

Apparently there was a very simple and real explanation for the misdiagnosis. Infact, because it was so rare was one of the reasons his double pregnancy went unnoticed.

When the health care workers saw the baby in the “front”, there was zero need to check other places, especially behind the uterus.

The couple held each other and looked at their daughters in astonishment. “This is…” Mark felt something new, something he could barely put into words.

How come he didn’t look like he was carrying triplets? Often, women who carry triplets have enormous belly’s. But Mark’s belly didn’t look particularly big.

The doctor explained to him that although all of his babies were perfectly healthy, they were also a little premature and weighed in smaller than average. Now, everything clicked.

Throughout Mark’s entire life, he had always felt like he had been born into the wrong body. It wasn’t until the transition that he finally felt like he was becoming himself.

Now, at the ripe young age of 28, Mark finally felt normal. He rocked the adorable squirming pink lumps in his arms and felt a new emotion.

His lips turned up at each corner of his mouth, his eyes sparkled. It was a feeling he never felt before and he wasn’t about to forget it anytime soon. What was it?

It was the awe of life. Nature and the universe truly knows no bounds. And what people think is normal life will quickly show them wrong. Now, as he stared at his wonderful husband and his growing family, he felt special.

His dreams were finally coming true. This coming Christmas would be one to remember.