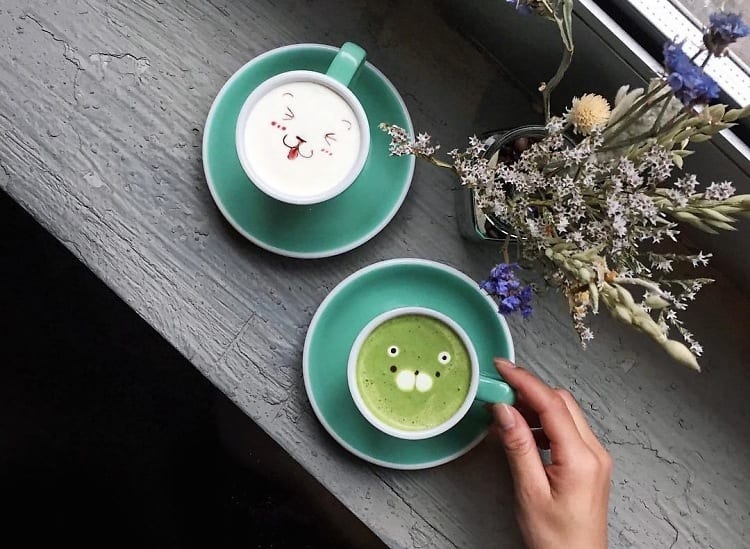 With the explosion of third-wave coffee shops around the country, latte art has taken over the world of java and the world of Instagram. With a simple search of the hashtag #latteart, you’ll see more than 4,000,000 glossy photos of latte art from baristas around the world. The art, which consists of pouring steamed milk into espresso at a specific angle to form the shapes, has become the mark of a talented barista.

The history of latte art begins with the centuries-old traditional combination of steamed milk and espresso in Italy and other European countries. Lattes were a normal part of the coffee drinking culture in Europe, and in the 20th century, the practice spread to the United States.

Fast-forward to the late 1980s/early 1990s, and drinks with pretty designs in them started popping up in coffee shops all around the country. These fun designs along with the increased desire for quality coffee and the influence of social media have made cute latte art a popular movement among coffee drinkers. There are tons of new categories trending every year like 3D art, hyperrealistic art, and even anime-themed latte art! If you have a good espresso machine you can even try these creations at home!

Whether you take your coffee black or with steamed milk, its no doubt that a creative latte is visually appealing. Here are five that you almost won’t want to drink it! Almost.

3D lattes are the latest trend in the world of latte art and Instagram. Baristas all over the world are constantly creating adorable creatures and figures that are equal parts cute and delicious. Popular self-taught latte artist Daphne Tan has more than 300 posts of some of the most innovative 3D art you’ll see, and it’ll send you running to the nearest coffee shop! But just how do baristas create these dynamic figures in the coffee? No, it’s not witchcraft, and it’s actually a lot easier than it seems.

To create these adorable foamy creatures, you just need a handheld milk foamer and a hot drink of choice. Once you’ve foamed the milk in a separate glass, you can begin scooping it in the glass to create the animal of your choice. Finally, add in any details that you desire with a toothpick and your whatever food coloring you want. Still seem like a daunting task? Check out this easy tutorial for how to create 3-D foam art at home!

4.) The Classic With A Twist

This cute latte art takes the classic wispy latte designs to the next level, proving that you can get as creative as you want with these artistic cups of joe. In order to create these designs, baristas use either the free-pour method, an etching or a combination of both. Free-pouring involves meticulously pouring the steaming-hot milk into a cup of espresso and making designs from it.

Etching is using a toothpick to sketch out designs in an already prepared latte. Etching allows the barista to add in further detail, but the true skill is in the ability to pour the milk in at the right angle.

Because what’s better than collecting cats and coffee? Nothing. Cute animals are a common theme in latte art, and these lattes based off of the popular cat-collecting game Neko Atsume mixes cute kittens and delicious coffee perfectly. The art of making a latte has indeed spread into more avant-garde and/or realistic themes. There is cute latte art themed after just about anything.

On Instagram accounts like Nowtoo, there are over 1,000 photos of fun latte art themed after Disney movies, your favorite anime films and tons of other cute cartoons. I don’t know about you, but I can’t think of much things cuter than this adorable kitten hugging a ball!

Who says you have to like to coffee to appreciate cute latte art? Latte art trends have expanded from just espresso and milk into coffee-less drinks. Tea lattes and sugary lattes are also an opportunity for baristas to show off their skills, and for drinkers to snap a cute photo. From red velvet lattes to vanilla bean lattes, you can enjoy all kinds of delicious drinks with cute and colorful designs.

Matcha lattes, which feature steamed milk poured into a mug of matcha, have taken over Instagram. The designs can range from the traditional to the unique ones like these drinks at Sweet Moment in New York City.

The classic wispy leaves and flowers are a staple at third-wave coffee shops all over the world. A good barista can free-pour the steamed milk from a specific angle and height, creating thin feathery lines that are sometimes too cute to drink. Food blogger Crystal Wee chronicled enjoying a nice latte at a popular cafe in Singapore, which, according to Google, is one of the most latte art-obsessed countries in the world.

In countries like Singapore, new third-wave coffee shops have opened up at a fast rate in recent years, and the coffee-obsessed are impressed by the innovation of the baristas. Among other latte-obsessed countries are Australia, Malaysia and Hong Kong.