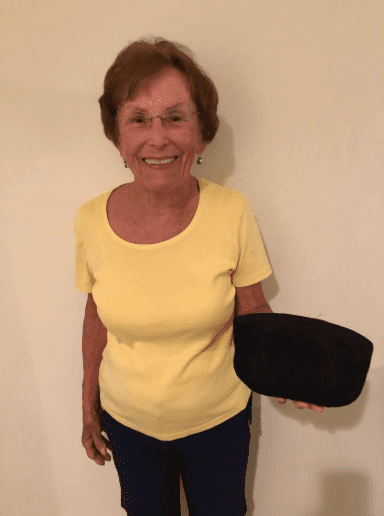 When a demolition crew was working on part of what used to be the Jefferson High School when they discovered an unexpected treasure. They uncovered an unintentional time capsule from the 1950s which led the Greater Clark County Schools leaders on a search to find the owner.

When workers started demolition they began with the Franklin Court building which used to be the school cafeteria and science classrooms. The school moved to a new location and the site of the old school would be used to build a new elementary school.

Before they started to knock the building down the crew began removing cabinets and lockers. It was then that they discovered the purse hidden behind one of the lockers. The handbag they found belonged to a student who attended the school in 1954. The identification card belonged to Martha Ina Ingham.

“We don’t know if Ms. Ingham knew she lost it there, we don’t know any of the specifics,” GCCS Projects and Safety Supervisor Chad Schenck explained. “Some of the items that were inside led us to believe that it was 1954 and it was a student that was probably 16, 17.”

There were many different items in the wallet including an ID, Social Security card, newspaper clippings from 1954, photos, a basketball schedule, a mirror, and lipstick. It even contained Juicy Fruity gum wrappers.

“It is fully intact,” explained Erin Bojorquez, GCCS public information officer. “There’s even a letter in there where someone asked her to prom. It is really neat.” These items gave an amazing glimpse into the life of a school student in 1954.

The purse was found by Kevin Morna and Mike Hobbes while they were pulling out lockers against one of the walls on the upper floor. They found a stratum of Oreo wrappers and other trash and this is where they found the purse.

“Then we noticed there was this little black bag laying on the ground just covered in dust,” Moran said. Initially, they assumed that it was a binocular bag but they were shocked when they realized what it was.

“We didn’t know if somebody had stolen it and gotten rid of it; there’s no telling what the back story is,” Moran said. “We couldn’t figure out how it even got back there unless it slipped in behind the lockers or something. You could tell it had been there a long time, that’s for sure.”

“We find bottles and every once in a while an oil can, but usually that stuff is so old that it’s either dry rotted or [otherwise] messed up,” he admitted. “But this was in the dark for no telling how many years. It was really cool — it was definitely the coolest thing that we’ve come across.”

According to Schenck, the company doing the demolition has saved 1,500 of the original bricks and some limestone from the original facade. These might be auctioned off to raise funds or be included in the new school’s facade. “They’ve been doing a great job on-site, very attentive, very safe,” Schenck said.

He admits that it was really cool to see what a student from the middle of the century might have carried with her. Ingham was on the student council, pep club, Hyphen staff, Tri-Hi-Y, and Psi Chi clubs according to her yearbook.

Glimpse Into The Past

“I think it’s fantastic — it’s an opportunity to take a look at 1954,” Schenck said. “You could see just in some of the things in the handbag, just how much pride she took in being a student at Jeff High. I think that’s really a neat story in and of itself.”

A Part Of It All

“To see this, it just brings back all the history and I think it reiterates the point as to why we feel it’s important to have a presence downtown again,” Bojorquez said. “That’s where the high school used to be and now we’ll have that footprint with the elementary school.”