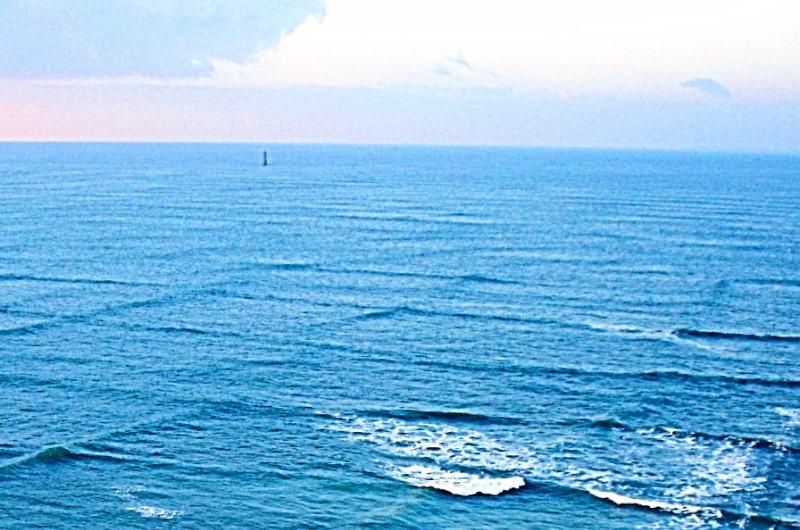 The horrid smell filled the air. Not even the harsh wind blowing the smell away.

The ground seemed to grow thicker and they were finding it extremely difficult to navigate where they were and where they were going. He knew how dangerous this could get. He was praying that this wouldn’t damage the struggling engine. He was terrified. If they got stranded, they would be lost forever and never get to see their families ever again.

Fred was working hard as he steered “The Maiken” through the beautiful blue waters of the South Pacific.

His girlfriends and two of their friends were happily tanning in the hot sun and enjoying the cool breeze of the ocean. They were having the perfect day and none of them could be happier. But that was when Fred looked up and saw something strange on the horizon.

The blue waves seemed to reveal a light, earthy tone right beneath them.

He had seen these colors often around sandbars, but those would only appear close to the shore. They were definitely not close to the shore. He was curious, so he quickly changed his path and made his way over to the mysterious formation. He didn’t realize what a bad decision he was making.

He turned to his girlfriend and frowned as he asked, “It’s an island?” She turned to look at it before shaking her head, “Can’t be. It’s not on any of the charts.”

This just made Fred even more curious and eager to find out what it was. He sped up and that was when the wind blew into his face, dragging the horrible smell along with it. They all quickly pinched their noses shut and frowned. What was that?

What followed was even stranger. They neared the edge and prepared to hit the shore. But they didn’t hit the shore, instead, they went right through it.

A dark trail followed their boat and when he saw his girlfriend lean over the railing, it was too late.

She screamed as she tipped over and fell into the water.

He felt his heart drop as he ran for the railing. She was waving her hands back and forth as she thrashed against whatever ever strange material was floating on the surface of the water. It felt like she was struggling against thick, grainy bog. Her hand was just out of reach.

Fred finally managed to grab her hand and pull her back towards him and onto the boat. He quickly wrapped his arms around her as her body shook.

“It’s alright. I’m okay. My bad,” She assured him and brushed the bits of material from her clothing. “At least the water is warm.” He was about to tell them that they should head back out to cleaner water, when one friend pointed at something and gasped an, “Oh my God.”

Between the spreading patches of brown were floating, dead fish. More and more of them were popping up from under the water.

Could this have been a toxic waste dump? Maybe another boat had done this? When Fred reached to remove another piece of grit from his girlfriend’s clothes, he paused when he noticed he’d seen this before. This was the first clue to a horrible conclusion.

He thought of the stones, the warm water and the dead fish, and suddenly, it all came together and made sense. Fred knew what this was.

He noticed their boat was in the middle of it all. He jumped up and ran for the wheel as fast as he could. “We need to get out of here now!” He yelled. He didn’t know if they had enough time.

He set the throttle to high as the engine revved hard.

The rubble around them was growing rapidly and was almost twice the size it was before. It was so thick that the boat struggled to move through it, the air thick and acrid. “What’s that?!” his girlfriend yelled. It was black and growing bigger and bigger.

A large plume of dark smoke erupted out of the water. The splashes hissed and sent steam billowing towards the heavens.

“Underwater volcano,” Fred said. It wasn’t until they were far away, did he dare to slow down. What happened next was equally awe-inspiring as it was terrifying.

The others were already taking photos and video, but all he could do was slump into his seat and try to calm his lungs.

He watched as the smoke and steam grew into the sky and a dark outline took over the horizon. He and his friends were firsthand witnesses to the birth of a new island. But what was the sandy layer that his girlfriend had tumbled into?

Fred tossed a small piece to a friend. “You have some in your bathroom.”

They looked at him in confusion. “Pumice stone. The kind your scrub your feet with. That volcano spewed it up to the surface. We were sitting right in the middle of it.” Another loud explosion shook the air.

The volcano cleared its throat again and shot a towering black column into the sky.

Stone shot up and then crashed back into the waves like tiny meteors. The group sat silent, watching every moment. When his own nerves had calmed, he dared to go back and get a little closer … but just a little.

It truly was amazing and dangerously beautiful. Fred couldn’t help but feel very small – not to mention curious about how it would affect the surrounding coasts.

He also had a brilliant idea. Maybe they could come back every year to see what would become of the baby island.