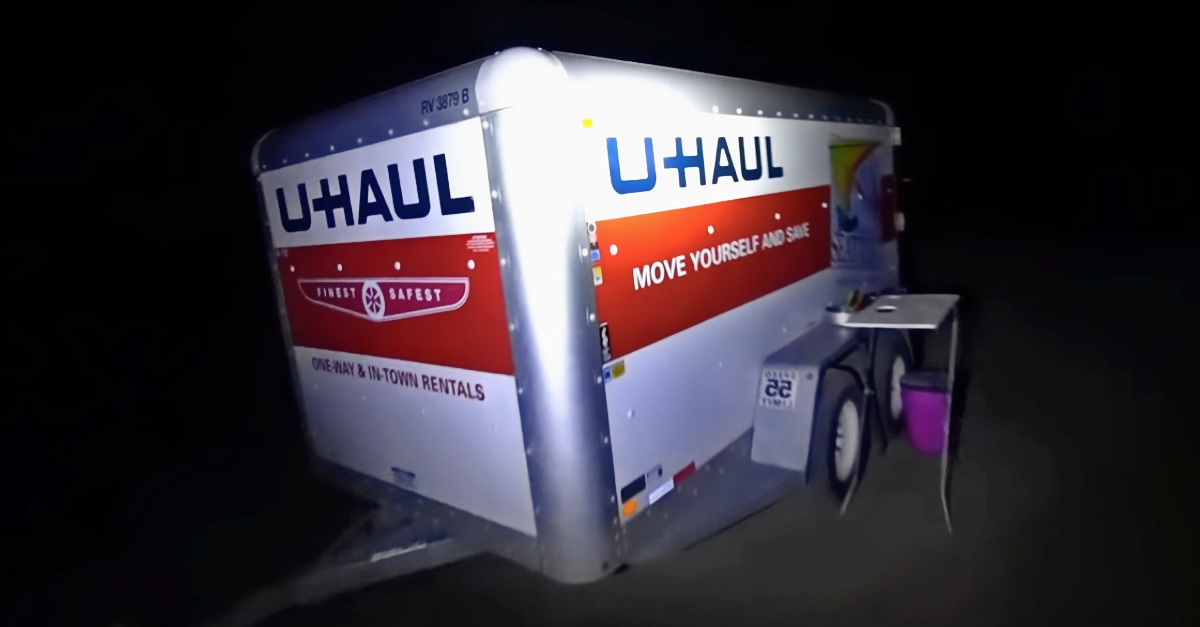 When the three men saw the unattended SUV with a U-Haul trailer hooked up to the back, they just couldn’t resist. The job had gone smoothly enough. They thought they had gotten away with it.

Speeding gleefully away from the scene, they fantasized about what loot would be in the back. Would it be antique furniture? Electronics? Jewelry? It was only when they opened it up that they realized they’d made the biggest mistake of their lives.

The couple’s afternoon had gone according to plan so far. It was a warm spring day in Mexico as they drove across another state line with their U-Haul trailer in tow.

Realizing that they weren’t going to reach their destination as soon as they had hoped, the couple decided to make a stopover at Residence Inn in Albuquerque.

They were tired, their muscles were stiff, and they hadn’t had a shower for days. They left their SUV and U-Haul trailer parked outside the Inn. But when they awoke the following morning, things had taken a weird turn.

The couple was dismayed to see that their SUV and the U-Haul were gone!

Realizing that it had been stolen sometime in the night, they rushed back into the hotel… but they hesitated before calling the local police. When the officer took the description and asked exactly what had been in the trailer, they didn’t want to tell him.

What Was In The Trailer?

The police department wasted no time in trying to locate the stolen SUV and trailer, but when they asked the couple about its dubious contents, they were hard-pressed to get a straight answer.

Nevertheless, they sprung into action and scoured the surrounding area. Fortunately, a few guests at the Residence Inn reported seeing something strange in the early hours of that morning.

Several eyewitnesses recounted that they had seen a suspicious red pickup truck hanging around the area. The police wasted no time searching their database to see if they could find a match.

Sure enough, the red pickup came up again and again, and it had also been reported stolen. Shortly after the police department sent out an APB alert, they had a lead.

The red pickup truck had been spotted by officers from Bernalillo County Sheriff’s Office, just one town away. The police gathered backup and began to converge on the suspicious vehicle.

But when it reached highway 1-25, the driver realized that he was in trouble. He floored it in a desperate attempt to outrun the police.

The police were determined to catch the criminals – even when the pickup passed the city limits. The driver showed no signs of giving up, driving erratically to try and shake the cops off his trail.

The driver continued to drive recklessly, endangering everyone on the road. But there was no way out. It was just a matter of time.

Finally, after the thrilling chase, the police were able to zero in and surround the red pickup truck. They apprehended three career criminals – Daniel Gonzales, Jeremy Soliz, and Anthony Serna, who already had a warrant out for their arrest.

Strangely, though, they all refused to tell the police where the SUV, U-Haul, and its mysterious contents were.

The police separated the trio and questioned Serna alone, hoping he would crack. They interrogated him for hours until he finally broke down.

He shook as he recounted how they had stolen the SUV and trailer in the dead of night, but started sweating when he told them exactly where they had left them.

Abandoned In A Quiet Street

Serna gave the police the location of the U-Haul and the SUV – it had been abandoned in a quiet street near the Inn.

The police found the criminal trio’s fingerprints all over the inside of the car and logged it as evidence. But there was still one more thing to do. They walked over to the trailer to take a look inside.

The Lock Was Broken

The police inspected the lock on the trailer and quickly saw that it was broken – so they were sure that the criminals had managed to get in.

They hoped to find more fingerprint evidence, and they needed to know what was inside that trailer. They flung the doors open and immediately recoiled. They could never have prepared for this.

In all their years on the job, the police had never encountered anything quite like the situation they were now faced with. At first, they hoped it was all just an elaborate prank, then they knew exactly why the criminals had jumped ship.

In the middle of the trailer was a full-sized wooden casket, and it had a body inside.

The couple, fortunately, had a reasonable explanation for the grisly cargo they had been carrying. The man in the casket was the woman’s father.

There had been no cemeteries in the area where he had passed away, so the couple had been tasked with carrying him over state lines to find him a proper resting place.

The criminal trio who had stolen the SUV and trailer were charged two days after they were arrested. They had obviously thought that they had struck gold when they saw their opportunity, but they had a rather rude awakening.

In an ironic twist of karma, the criminals had panicked when they saw what was inside the trailer and had hastily abandoned their loot – shaken and terrified.