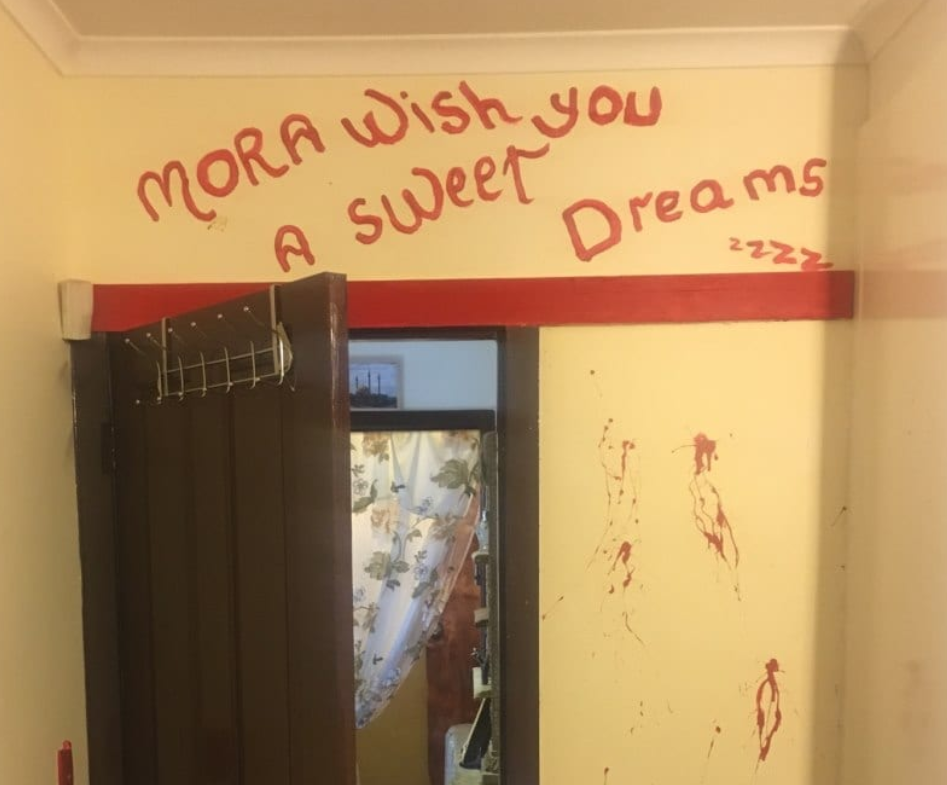 Ever bought a new house and found yourself slightly out of place? For this, it all started with some creepy messages painted on the walls and furniture. From there the strangeness would only escalate for Craig and Lisa Spurr!

Who knows what all this oddness was about?

According to Craig, he and his wife found ‘A very creepy painted message’ in enamel paint so it took a fair amount of elbow grease to sand and remove. “You could still clearly see it when painting over.”

It seemed a former occupant had a fascination with someone or something called Mora. Who was Mora?

Painted in red paint, or inscribed on the wood of some furniture, the word could be found in different areas of the home. This creepy home would only further freak the couple out!

Was this some kind of obsession or did Mora mean something more sinister?

But what could Mora be? Some internet users surmised that mora could refer to an ancient spirit, also called a Mara, in Slavic mythology. According to the Slavic tales, a mora rides on the chests of people as they sleep and is the cause of bad dreams or nightmares.

Unfortunately, the truth will probably never be known. But this wasn’t even the tip of the iceberg.

A light fixture attached to a hanging rope tied into a hangman’s noose was hanging in one room of the house. This was strange, to say the least, but that was far from the strangest things the Spurrs found.

The occupant had placed a window sticker which depicted a peaceful water scene adjacent to the heavy curtains. Maybe this occupant wanted to make up for the window that they couldn’t use?

In addition to the many strange fixtures of the house, this one had Craig perturbed. Four bulbs at one fixture, would this makeup for the light that was screened out by the immovable curtains?

Whoever installed this feature obviously couldn’t get enough light. This was probably just another one of the many strange things that will probably never have an explanation. Outside was something out of place too

In the private and spacious backyard, was the fan placed on a post of what looks like an overhead cover of some sort.

Lisa Spurr said, “I could see someone using this if it really got hot, but I think it would be better to just go inside if it was that hot.” We wish the Spurr’s all the best for this home makeover!