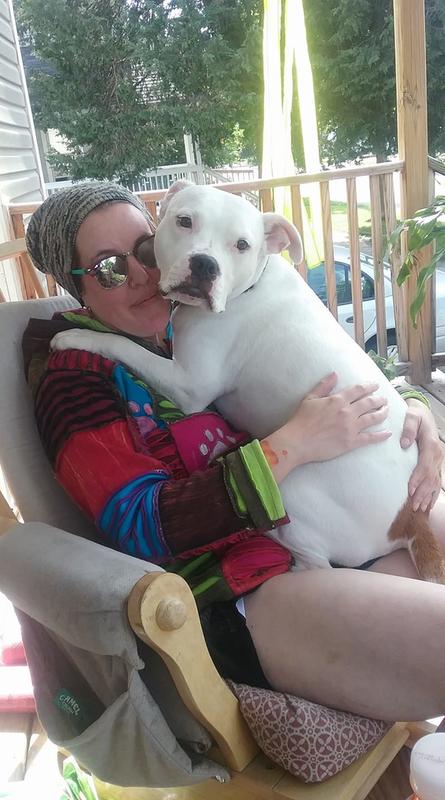 Addition To The Family

Kelly Benzel was beyond excited on the day she got to pick her newly adopted dog up. She knew he would fit right in with her small family and she couldn’t wait to shower him with the love he deserved.

She got into her car, and that was when she realized that something was very wrong. She instantly grabbed her phone and dialed the cops.

Kelly already had a pet dog, Brewer, but for the last while, she had been seriously considering getting another. She wanted to adopt one that was in serious need of a loving and caring family. She knew she could give it what it deserved.

She found a white pit bull mix named Rocco, and she knew it was the perfect fit. She immediately got things rolling so that she could bring him home as soon as possible. She couldn’t wait for them to spend their lives together.

Kelly learned about Rocco through Facebook. She found someone that was trying to sell him for $50. The person advertising was Rocco’s owner’s roommate. Therefore, Kelly never got the chance to meet his original owner.

She had her heart set on the beautiful boy, so she decided not to think too much about the owner. And here it was, the day she had been waiting for. She was finally able to go and pick him up.

Kelly fell in love the second she laid eyes on Rocco in person. He was the sweetest thing! She excitedly and carefully got him into her car before driving off to take him to his new home.

But after mere minutes, she noticed the horrible odor radiating from Rocco.

There were some obvious reasons for Rocco to smell as bad as he did. He was a dog, after all, they do lack hygiene. Maybe his previous owner didn’t bathe him often enough.

But the smell could also stem from natural bacteria in his paws that would give off a yeast-like odor. It kind of smelled like Fritos. Maybe Kelly was just really sensitive to the scent. But what if it was something more insidious.

The smell was so bad that Kelly had to pull over. She approached Rocco and carefully inspected him to find the source of his stench.

She couldn’t see anything, so she decided to move his harness. That’s when she made the horrifying discovery.

He had a gash on his chest. It was huge! It was about 6 inches long and 1.5 inches deep. She hadn’t seen it before because the harness was covering it.

She new why it smelled so bad. It had gotten infected. She had to get him to a vet right away.

Luckily, the vet could help him. She gave him antibiotics and medication to relieve his pain. She cleaned the wound but warned that he needed surgery to close the deep gash.

Kelly was relieved that he would be able to recover. But she still wondered how he got the injury. How was it possible?

The vet was able to conclude that the harness had caused the wound. She said that it looked like he was forced to wear it since he was a puppy. As he got bigger, the harness became embedded by his skin.

Kelly was angry enough that she decided to call the woman she had bought him from.

When she informed the woman of the wound, she tried to bribe Kelly by offering to let the original owner pay for the medical bills.

Kelly wasn’t having it. She decided to call the police because of animal abuse.

The Police Get Involved

After being contacted by Kelly and the police, Rocco’s previous owner tried to feign ignorance. He claimed he had no idea the dog had an injury on his chest.

He said the harness was for safety purposes, to keep Rocco from running away. Unfortunately for him and his roommate, the court thought otherwise.

Rocco’s previous owner and his roommate were charged with mistreatment of animals, and subsequently fined $1,500.

Though it was unclear whether any of the money would go to Rocco’s medical bills, Kelly didn’t care. She was happy that justice was served and, more importantly, that Rocco was now away from those who mistreated him so badly.

A Bond Of Love

Rocco took to Kelly right away, and now she can’t imagine life without him. “I have never felt this strong of a bond or this much love from any living thing,” she told AnimalKind.

Though he was out of imminent danger, his wound was far from healed. The path to recovery would be slow, but Kelly was there for him every step of the way.

A Slow Path To Recovery

The vet told Kelly it would take around two months for the wound to be clean enough and ready to be closed up. In the meantime, Kelly would have to change his bandages regularly and make sure it didn’t get infected again.

It was hard work, and painful for Rocco, but he knew she was doing it out of love. And her efforts paid off.

Leaving The Pain Behind

After the surgery, Rocco’s wound healed up pretty fast. Soon, the pain and suffering were behind them, and they were free to enjoy family life together.

Now, a year later, Rocco still bears a scar on his chest, but that doesn’t stop him from being the happiest and most loving dog to Kelly. And for her, it’s a reminder to always be a voice for animals.