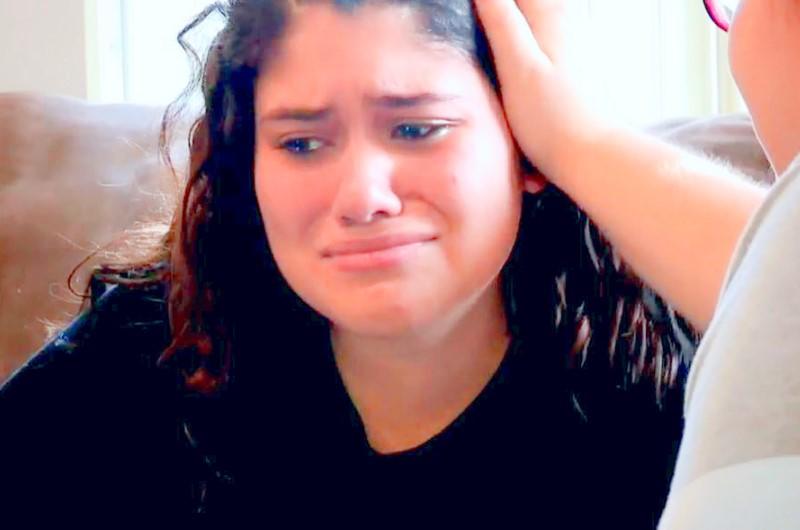 “Are you ready?” he asked. She wasn’t ready, but that didn’t stop hi from beginning to unfold his “master creation”.

She briefly saw blue and layers of tulle before covering her face with her hands. She was crying harder than ever before. She didn’t want this, but he was doing it anyway.

Parker Smith and Addi Rust were the best of friends. That’s why they decided to go to Pendleton High School’s senior prom together.

It felt like something from a movie. She was thinking of everything she had to get done for the special day. She was excited every time she thought about what she would ear to prom. She had no idea what drama would come unfold because of her prom dress.

Addi had been dreaming of prom for as long as she could remember. She was prepared to revel in the build-up to her special night.

Her and her friends had gone window shopping at expensive clothing stores, knowing that they wouldn’t be getting any of these dresses. Addi couldn’t wait. She didn’t care about having a designer dress, she just wanted to have a good time. She would soon discover that having an expensive, designer dress was very important to someone else.

She sometimes felt ashamed in these expensive stores. She knew her family would never be able to afford any of their dresses.

But she dreamed about being able to choose one and pay for it. Eventually, she found a dress that she could afford and started saving all of her money for it. Her date, however, did not like the sound of her settling for the dress she chose.

Addi knew Parker was stubborn and had high standards.

Prom was weeks away, she didn’t have time to look and save up for another one. Besides, this one was perfectly nice. When Parker found out about this, he demanded that Addi show him the dress.

Usually the boy would only see his date’s dress as she came down the stairs while he stood at the bottom.

But Parker knew a thing or two about fashion. He wanted to know exactly what his date would look like. Parker was not happy with the cheap dress Addi had chosen for herself.

“I could sew a better one myself,” He rolled his eyes. He hated the dress, he knew she could do a lot better.

She felt so insecure, she didn’t even know if she wanted to go anymore. But Addi didn’t know that what Parker said was true. He really could sew a better dress than the one she had chosen.

Parker didn’t know anything when it came to designing dresses. He couldn’t even sew!

The thought of Parker making her dress for prom made Addi nervous. She wanted to curl up and cry at the idea. She was wondering if he was trying to ruin prom for her, he was just too persistent on making her dress.

What scared her even more was that Parker refused to let her see the dress until the day of their prom. He was still refusing to let her wear the dress she found at the mall.

She had nightmares about the dress. What if it didn’t sit right on her body? What if it was ugly? Everyone at school would laugh at her!

Addi was feeling down on the day of her prom. She felt like there was nothing special about her.

On top of her insecurities, it was agony waiting for Parker to reveal the dress. She thought about calling it all off. She was getting ready to text him when she heard the doorbell.

It was Parker. Addi called down to her parents, insisting that she’d changed her mind. She had decided that she wasn’t going to prom at all.

Eventually, her dad came up and asked if he could come in. Allowing him to sit on her bed, her dad explained that she should hear Parker out. Addi agreed to come down, but before she knew it, she was in floods of tears again.

Parker began to take the DIY prom dress out from its protective packaging and Addi cringed.

Trying not to show that she was crumbling inside, she cracked a smile. “Are you ready?” he asked. Preparing herself for the worst, she nodded her head. But she could never have prepared for this. All she could do was cry and cry. was this some kind of joke?

You see, Parker had been hard at work for the last few weeks. He had sketched out the dress that Addi had loved so much.

His grandmother sat with him for hours, teaching him how to sew. He had completely remade the dress several times, just to make sure that it was perfect. But when Addi finally saw it, she couldn’t believe her eyes.

Parker has never wanted Addi to wear the cheaper dress because he wanted her to have the one she fell in love with at the designer store. But unable to pay for it, Parker had made the beautiful dress himself for a fraction of the cost.

The theatre student — with a little help from grandma — spent night after night sewing together a gown that would make his date feel as special as he knew she was. And the way he did it was quite ingenious.

Instead of the studded crystals that the dress in the designer store had, Parker added decorative stones to make the dress sparkle.

He’d picked out material that matched the color of the original dress perfectly — a gorgeous sky blue. He’d added layers of tulle to the skirt to give it body. The finished product exceeded all of Addi’s wildest expectations.

Addi was so blown away that she took to Twitter to tell everyone about Parker’s amazing feat.

‘Taking a minute to brag on this man because I think this is the coolest thing that I’ve ever been a part of. Parker MADE my prom dress,’ she wrote, ‘Straight from scratch did the whole thing and I am still speechless. I’m so lucky to have him as my best friend!’

Addi couldn’t believe that Parker would go to such great lengths to make her happy. “I absolutely loved the dress,” She said.

“And it grew our friendship more than ever. I was so proud of him and so blessed to be able to call him my best friend. He’s so talented!” But Addi wasn’t the only one with a magical feeling inside.

Parker also took to Twitter to share his experience: ‘Quite a journey, but the first thing I’ve ever sewn (a prom dress) has been finished, just in time for the ball,’ he wrote.

‘Not only did I get the honor of being the Prince Charming to the beautiful @AddiRust, but her fairy godmother as well, haha! I’m so thankful for her. (From scratch).”

Parker was pleased about the opportunity to work on Addi’s dress and realized what he was capable of, opening the door for a future as a fashion designer.

Soon after word got out about his stunning creation, he was asked to create gowns for the theater community — on the production of none other than Cinderella!

Parker’s friend Gracie Bertram, who played Cinderella in the production, shared how beautifully the costumes that Parker had created for her turned out.

‘Can we appreciate my best friend for a moment. He made both of these dresses BY HIMSELF FROM SCRATCH and look how gorgeous they turned out,’ she wrote. ‘You are truly remarkable and I’m so proud of EVERYTHING you do.’