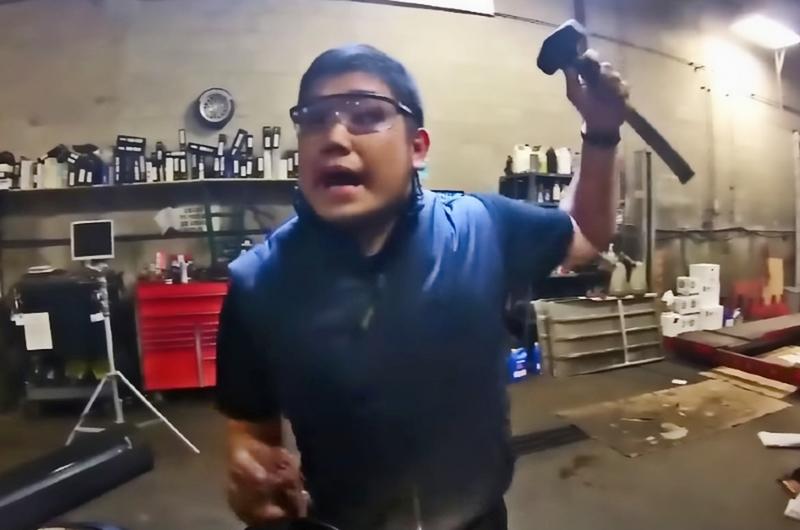 David Sherman had more going on than it would seem. He had a business of his own and would take part in amateur racing in his spare time. This meant he knew more about cars than a regular guy would.

David collected a few cars and loved them to pieces. He knew every detail of the car well, so when problems emerged he decided to take it to the Economy Lube garage, but he already knew what the problem was.

He had already checked his car and knew the only issue was the oil – it needed a change. Everything else was pristine. So he hopped on google and found the closest garage – Economy Lube. It was only $20 for an oil change, what a steal!” he thought.

He took his car into the garage that very evening, expecting a simple oil change.

Oil changes shouldn’t take very long to do. An experienced mechanic should do it why you wait. So he was quite surprised to find that they said they’d have to keep the car in overnight.

They kept telling him that they saw more problems when they looked over the car. It needed all sorts of flushes, including a coolant flush, brake fluid flush, and even a service on the transmission.

David couldn’t believe that he had missed all of those things when he had looked at the car. He didn’t want to argue with experts though.

He gave them the car and expected to find it in good working order the next day. They almost got away with it until he got the bill they sent him.

He couldn’t believe what originally was a $20 bill turned into a $287 charge! He didn’t understand how it could have cost this much.

David knew he could have done all of the work himself for free. He wanted to check out the work and see if it was legitimate.

It hadn’t been long before he realized that something wasn’t right… The oil change was done, but everything was left… the same?

Did they even do anything that they promised? He had to make sure, and there was only one way to do that.

David’s friend also took his car to the same garage looking for a simple change of oil. They would also end up sticking him with a huge charge.

This couldn’t have been a coincidence. Something was very wrong. How dare they do what they were doing. They were both about to figure things out.

After David’s friend was charged $280, they raced back to David’s to watch the camera footage. David hit play and watched the mechanic get to work.

The further the film played, the more David’s jaw fell to the ground. He watched what the mechanic did in complete shock before his face turned red with anger.

There was no way he wasn’t going to let this company get away with this. Did they have something against David and his friend? Did they know them? If not, why would they do this?

David packed up the evidence and brought it to the cops. If he wanted to bring this big garage chain down, he needed to call in professional help. What did the camera’s capture?

David watched in astonishment as the cameras caught the mechanic changing the oil but carrying out none of the flushes or transmission servicing that they charged for.

In essence, what they did was fraud. And David had a sneaking suspicion this hasn’t just happened to him and his friend. The way the company persuaded to upsell both of the with the exact same speech seemed rehearsed. But what did the cops say?

The cops had their hands full so they put the men in contact with a former fraud chief with the Hamilton police. Mark Simchison built his career dealing with fraudulent behavior.

With a company as big as Economy Lube, they needed to be careful when confronting them. That’s where Simchison’s expertise came in handy. But even he had never seen anything this blatant before.

“If they are … receiving money for services that they did not perform, that you paid for, in all honesty, that’s fraud,” says Simchison. There was no doubt in his mind that this company was dirty. But the problem lay in proving it.

When David and Simonchison confronted the workers, what they said was crazier than their wildest imaginations.

“This is what we were trained to do. Yeh it doesn’t feel great but when your job is to make as much money as you can for the company and you come home with 1 or 2 thousand dollars every week, it’s hard to say no to that”, one worker said.

“It’s bad but we get a lot of people coming in who don’t know anything about their car. It makes our job easier. If we don’t make enough money, we get fired so it’s us or them”, another said.

David confronted the CEO of the company but couldn’t get him to admit any fault. He denied any responsibility for individual workers and said he had no idea any of this was going on. He also agreed that it was fraud and would deal with the situation swiftly.

But David wasn’t convinced. He was going to move to Phase 2

He let the situation die down a little. The goal was to let the company think they were in the clear.

In a few months, however, David was going to go mercilessly nuclear. He borrowed a friend’s car for the undercover operation. Between David and a couple of trusted specialists, they went ahead and made sure everything in the car was fixed, cleaned, and flushed where necessary. There was no way it needed any service whatsoever.

Next, was to install the same camera setup they did last time – but with a few more added for better angles and coverage … and the ability to watch live.

Finally, for the pièce de résistance, David got his mother to go in as the clueless old lady. The trap was bait and set. They would soon find out just how crooked the entire string of garages continued to be, as well as uncover a few more scam angles.

The mechanics sent secret smirks to each other when they saw his mother hobble in. Part of him relished the moment, but he also felt a surge of rage. How many people had been scammed so far? It was so wrong. So, what was the final estimate they handed over?

There was the standard song and dance about “flushing” blah, blah, blah. But now where was the “need” to change out the battery for a new one as well as needing a new serpentine belt and air filter. On top of it all, there was a “broken” part that needed replacing.

David grinned as his mother started asking specific questions he had coached her to give. They were a sneaky mixture of stuff he had found online as well as suggestions from the authorities.

It was scam-catching gold. His mother acted stunned and helpless, then asked the first question that would set off a string of incriminating dominos.

“No, you can’t pay with check. We take cash only,” they answered. That was the first red flag. After, when she asked if she could see the broken part, things turned tense.

The mechanic flashed an annoyed glare and outright refused.

“Customers aren’t allowed in the back.” But they script was ready for that too. “Let’s take it out to the front then and you can show me.” The mechanic’s face puckered like he was sucking on a lemon. But it was time to give them want they wanted, so David could move to the final phase.

In the end, they had her pay the bill – which was all part of the plan.

And, just like they expected, the work didn’t get done – except for the belt and air filter – which didn’t even need replacing in the first place. Also, instead of putting in a new battery, they just wiped down the old one to make it look slightly newer. This was getting insane!

One wasn’t enough. David had to bring the entire thing down.

He and his amazing scam-busting team went on to 6 more locations – all from the same company that had scammed him in the first place. The results varied in how much the bill was, but a clear pattern emerged. The cops were going to love this.

There was already an investigation going, but David felt a surge of pride and happiness when the officer’s eyes turned wide. It wasn’t every day they had a sweet case like this handed straight over to them – evidence and all.

The only thing he wanted, besides his money back, was one thing.

He wanted to be there when they confronted the CEO again.

He wanted to watch with satisfaction as they disassembled the man’s life. He wanted to make sure they didn’t hurt anyone else every again. And he wanted to know which other companies were suspected of doing similar things… so he could go after them too.