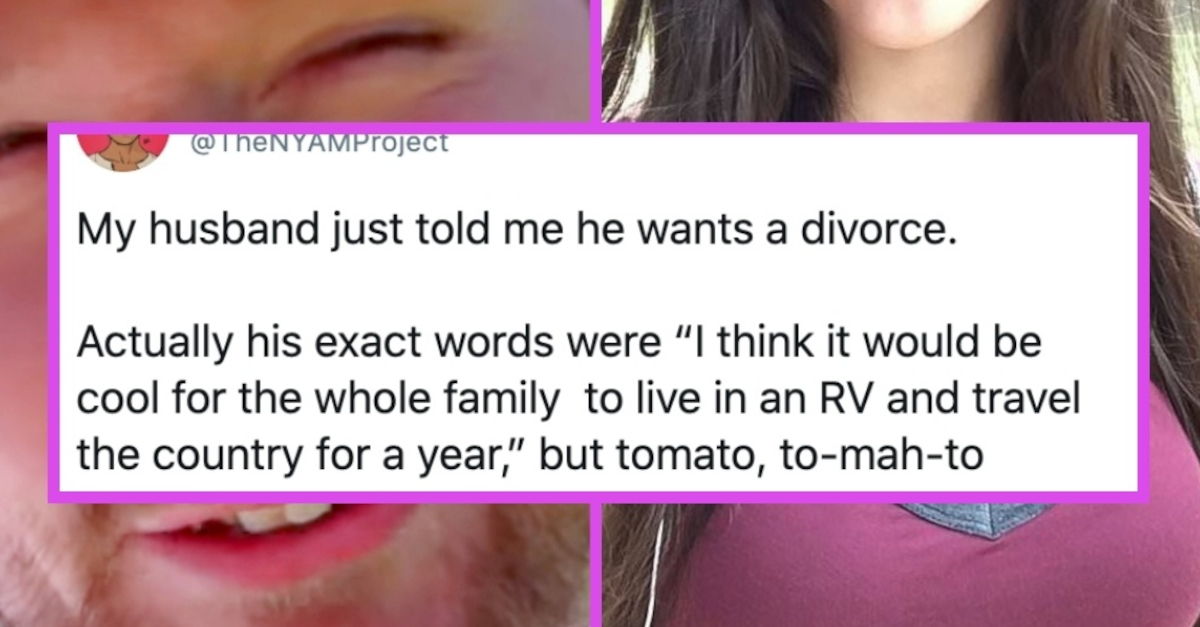 The Best Of The Worst

While 99% of divorces are unpleasant, some of them can get downright petty.

People from all over the world converged onto Reddit to share their shady stories. From fighting over paper dolls to selling off property for pennies, even breaking and entering, here are some of the nastiest.

What’s Mine Is Yours

When I worked at a firm, I observed a divorce that lasted decades. The husband had won a huge settlement after being in an accident that caused brain damage. His wife spent the next several years draining his account and taking over property by forging his signature or getting him to sign papers he couldn’t understand.

She then forged some letters from a tax authority and convinced him that he was about to go to prison. She then told him to flee the country. He finally came back years later to find out everything that he’d owned was in her name, and one of the documents he’d signed were their divorce papers. He was left with nothing.

The divorce ended with the wife getting the house, a generous retirement payment, all the gifted jewelry, and the Harley that she had gotten him for his birthday. A few weeks later, there was an incident at the house. Someone broke in and took her jewelry from her husband and only that. It was meant for their daughter.

She tried to file an insurance claim on the jewelry but forgot to get appraisals. So, the most she could get from insurance was $1,500 for over $20,000 worth of jewelry. There’s reason to believe that she staged the incident and now has jewelry that she can’t sell, wear, or give to their daughter without admitting to it.

No Time For Laughs

The husband and wife were still living together during their divorce. The husband pulled a, “loser says what?” on her, and she took the bait. He giggled like a little child. Her reaction was so absurd, it’s unforgettable. She called her lawyer, who called his lawyer. He got a call from his lawyer telling him that he wasn’t allowed to make jokes like that anymore.

I got married at 18 to escape a bad life that lasted four years. Once when I was at work, he wasn’t answering any texts or calls. When he did answer and before I could say hi, he said, “What do you want, I’m playing Call of Duty.” I left him a week later. The petty reason is just the straw that breaks the camel’s back.

My friend’s ex left him because her male “friends” were less attentive and wouldn’t buy her drinks anymore after she had gotten married. It was naturally his fault. Even more hilarious is when he found someone else nine years later, she became upset because he was supposed to wait until she “got her head on straight.”

My dad was threatening to divorce over a window—but it goes so much deeper than that. It was not just any window, but my bedroom window. He had asked me to open it. But I said no because I was not comfortable with it open. One huge screaming match later, I was left feeling guilty as my mother cried because Dad was threatening divorce and looking to move out.

We couldn’t afford it. We could barely afford where we were renting then. Thankfully, my dad realized how stupid his reaction was over a window after a few days, but now I’m scared that if I refuse to do something like that again, he will actually leave!

The wife was going to make dinner that night. The husband made dinner every single night. She had one job. It was a chicken-based dish. Both had gone into too much detail about their planned meal with drinks. She undercooked the chicken. Their solution? Divorce. The husband said that they had never really argued prior.

My client was living with their partner while the family home was on the market. Both refused to speak to the other for any reason whatsoever. All communication was done through me and the opposing counsel then billed to our clients. I had to negotiate terms with the other lawyer over the sharing of their fridge space.

My client’s husband used her email address and phone number to sign her up for every bank, loan, religious, and inappropriate website he found. People bombarded her contacting her about their products and services. He even put out ads for partners online with her information. She actually went out with a guy who answered!

My ex tried to file for an emergency order for “kidnapping” our 2-month-old son because I’d moved back home after our split. He had been to my mother’s house numerous times and knew that I was there. He tried to get a judge to order me to move back to the county where he lived even though I had no job or place to live.

The judge told him to never bring that type of request before his court again or his lawyer would lose his license. He then conspired with his lawyer to draw out the divorce proceedings over five years. We were only married for a year and a half, and his girlfriend who lived with him called to tell me this was their plan.

It took a long time and over $60 thousand in fees for my divorce. This was because he had me served first, and therefore, I was the respondent. He then left the state and refused to show up for court dates. His lawyer removed himself as his representation. So, the judge told me that we had to push back the proceedings.

They needed to give him a chance to show up. So, it took four years just to change my status and plaintiff for things to proceed. My lawyer deals with multi-million-dollar divorces for ridiculously rich people in Beverly Hills. He told me that he’d never had a more complicated case for a couple with no assets involved.

My ex now actively avoids employment, jumps from job to job avoiding the wage garnish, and puts all assets in his parents’ name to avoid paying child support.

The wife worked as a teacher and was paid well, over $100,000 a year. The husband worked as a general laborer and made about half of what she did. During their divorce, he gave her the house free and clear with the understanding that when she retired, he would get 55% of her pension to offset his interest in the house.

She agreed as she had to retire for him to get any money. Years later, the wife retired without telling the husband. When their son realized what she was doing, she told him not to tell his father. He agreed until a few years later when he learned that his father was in trouble with his finances due to economic issues.

So, he’d let slip that his mom has been retired for a few years now. So, the husband contacted his attorney. Then she was in a mess after upsetting the court as she’d previously agreed to the terms. In the end, he got 65% of her pension for the rest of their lives and she had to pay him all the money that she owes him.

My ex came out as gay and decided he wanted to be a costume designer. Ok, well bad for me, but more power to him. He decided the historical collection of paper dolls my grandma had left me should go to him because he wanted them as models. My lawyer had to claim the shoebox of paper dolls as nonmarital property as an inheritance.

His lawyer made a claim about how they were “co-mingled” and thus marital property because I had put things in the box that I had bought during the marriage such as a coloring book. So, in an otherwise uncontested divorce, there is a giant paragraph in the decree awarding me my nonmarital, inherited box of paper dolls.

Can’t Have It All

The husband was an annuities investor and had money and his home before he met his wife. He also had a prenuptial agreement that was ignored during the division of assets. He was also divorcing her for infidelity witnessed by both their children and captured on the house’s security cameras. He lost his case in the end.

The judge determined to split their assets equally. So, they had to sell their house and all of their possessions and divide the profits between them. This was in addition to alimony and child support payments coming from half of his pre-tax wages that he earned. She was also awarded half of his retirement and savings.

The wife received 70% of custody and jurisdiction over visits. She got his three luxury cars leaving him only one. The husband had to foot the bill for all court costs and fees for them both. So, to get revenge, he quit his job, sold his brother the $2.7 million house for $50k, and switched his life insurance recipient to his brother.

Stuck In The Moment With You

This couple was breaking up, and the husband moved out of the house. The wife went to work the next morning as usual. When she came back home in the evening, she found the husband had been to the house and to take his clothing and belongings as she had expected. But he also did something else that she’d never expected—he’d gotten the pettiest revenge ever.

He’d super-glued her belongings together. He glued the TV remote to the table, the phone to its cradle, the pillows to the couch, and even glued the vacuum cleaner to the carpet. She had to report it all as property damage. The officer went with her through the house documenting dozens of items glued to various things.

But for days, she was discovering more things stuck together. So, she then called me to amend or update her report with complaints like, “The oven mitts were glued to the wall!” or “He glued the sheets together in the linen closet!” I’ve seen people do and say really awful things to each other, but that was diabolical.