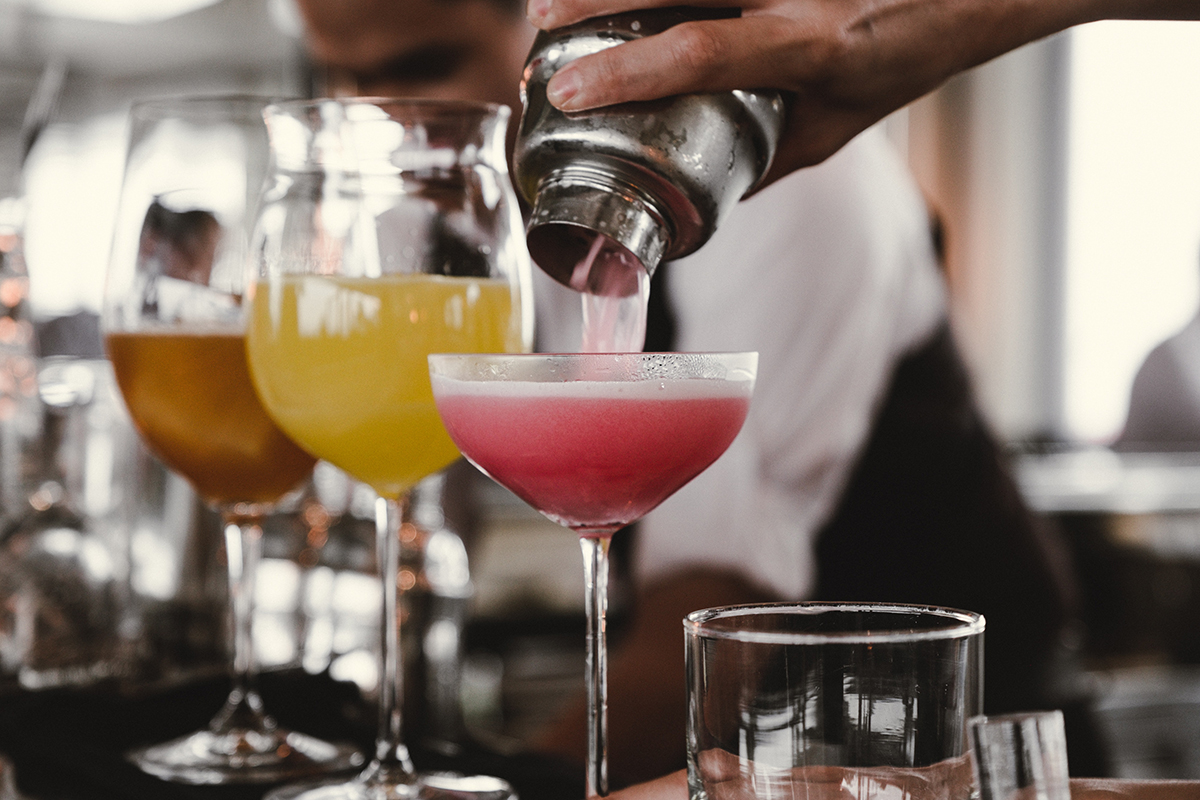 New Year’s Eve has been known for friends, fun and lots booze. And while champagne has been known to be the drink of choice at NYE parties, it can get expensive and not everyone is a fan of the carbonated beverage. So before you worry about what to serve your guests on December 31st, what about just tossing this tradition to the side and trying out some other libations instead?

Still want to appease champagne drinkers? Check out our Top 5 Champagne Cocktails to Liven Up Your Bubbly This NYE

Although sparkling wine can be a luxurious way to celebrate the coming New Year, there are many other drinks, specifically cocktails, that can not only be a great alternative to the bubbly but also make your party stand out from others. To make sure we have all our bases covered, each mixed drink features a different popular liquor. This way, you can offer up a selection of drinks at the upcoming NYE soiree. Cheers!

Let’s face it: New Year’s Eve is celebrated in December, which means that many people around the world party in the middle of the blistering winter. And even though drinking enough alcohol can warm some people quicker than others, it’s safe to say that you would probably want to skip all the ice cubes if you could help it.

So if you’re not partying it up on a beach in the Caribbean, then you might want to offer your guests a hot toddy. For those of you who don’t know their way around the steamy beverages at happy hour, it’s simply a tea or cider with some whisky. And depending on who makes it, it can be as simple as spiking your cup of afternoon earl grey. But Small Screen Drinks’ version of the elixir adds more flair by making a lot of the ingredients from scratch. Not only do they make their own ginger simple syrup, but they also replace the tea bag with a fresh ginger and honey concoction that are combined in a blender like this one by Cleanblend. After combing those ingredients with some fresh lemon and your favorite whisky or bourbon, you can pour the cocktail into one of these vintage glass mugs to dress up the drink.

Recipe for the Hot Toddy

If your guests like their gin, push the classic gin and tonic to the side and try making them a Negroni instead. Originally made in the early 1900s in Italy, it uses gin, vermouth and Campari, which gives this drink its signature reddish color.

Because the ingredients have their own distinct flavors, this is definitely not the type of drink that you toss into a glass, shake and then serve. Instead, you should use a jigger, or small measure cup used in mixology, like this one by OXO to measure each component. Once you have everything in one glass, stir until blended and then serve in your favorite drink chilled drink glass and serve to your gin-loving friends.

Recipe for the Negroni

Vodka seems to be the more common of liquors ordered at the bar, probably because it can be combined with practically all types of mixers. But if you want to try something a little different, what about giving the Pink Lips a try?

In this recipe, bartender Devon Espinosa combines fresh squeezed lime juice, pear vodka, simple syrup and ice cubes into a shaker like this OXO one. After shaking it up, he pours it into a chilled glass and puts in a spoonful of pomegranate seeds for a little tart surprise with every sip. Finally, he makes his own version of a pink gelatin-based whipped cream called a espuma, which he made with a whipped cream dispenser like this one. Although this is what puts the “pink” in the “Pink Lips,” you can also skip this step and enjoy the cocktail as is.

Recipe for the Pink Lips

Margaritas are usually linked to Cinco de Mayo and warmer holidays, but that doesn’t mean that we can’t have some tequila in the winter months. But instead of going shot-for-shot, we can combine it with another cold weather favorite: apple cider.

The Tipsy Bartender combines gold tequila, Grand Marnier, triple sec and, of course, apple cider, into a shaker with ice. After shaking it for a couple of minutes, you pour the cocktail into a chilled glass that’s rimmed with orange juice and cinnamon sugar. And since these kinds of drinks can get a little messy, you can use these simple plastic tumblers so everyone can avoid any party fouls.

If you want something that you can whip up with not much effort, what about making a bowl of punch? No, this isn’t the kind of punch you tried to spike at the high school dance. Donal Skehan has a great recipe for a pomegranate and orange punch that’s seasonal, festive and super easy to make.

In a bowl, combine rum, pomegranate molasses, star anise and cloves. Stir this up and let it infuse for an hour to let the flavors meld together. Add ice, pomegranate juice, orange juice, and top it off with some ginger ale or ginger beer. Mix, and then you’re ready to serve. If you want to avoid any messes, you can use this dispenser so that guests can serve themselves.

Recipe for Orange and Pomegranate Recipe

Which of these delicious cocktail recipes are you going to try at your New Year’s Eve party?