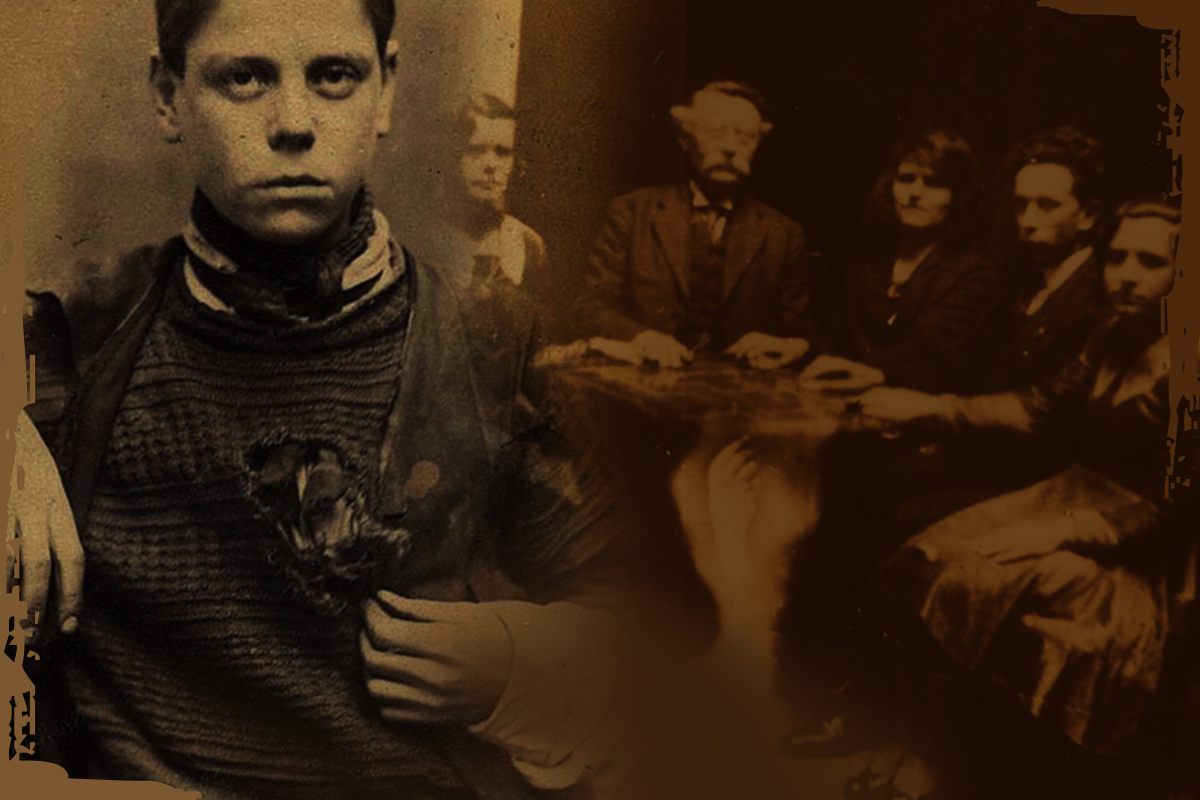 Though Americans typically associate the telling of ghost stories with Halloween, the British have a surprisingly long tradition of sharing creepy tales during the Yuletide season. Many attribute the popularity of these stories to Charles Dickens, who, during England’s Industrial Revolution where work productivity trumped the frivolity of Christmas, all but saved the holiday by publishing All The Year Round in 1859 — a weekly periodical that came filled with a collection of ghost stories from talented authors like Wilkie Collins and Elizabeth Gaskell.

From this point on, the story-telling tradition during the winter months solidified, and Victorian Brits looked forward to the time of year when the nights were long and the spirits roamed. Throwing a holiday party often involved gathering your friends and family around the glow of a fire and scaring them to bits with creepy, written tidbits about death and ghosts and strange whispers in the darkness.

While a select few of these many horror stories mention Christmas, the vast majority were solely dedicated to making your skin crawl. But in honor of the looming December 25th holiday, all but one in our list of five include some mention of the Christmas season, with the exception only getting a pass because its author, M R James, is one of the “Spooky Christmas” genre’s most prolific.

So, while you’re all bundled up on Christmas Eve, wondering what to do in anticipation of St. Nicholas’ morning arrival, why not bust out one of the following five tales and give your friends and family a Christmas to remember?

J.H. Riddell was one of the most influential writers during the Victorian Era and was — cue collective gasp — a woman. Following the swift succession of both her parents dying, Charlotte Riddell published her first novel in 1858 under the pseudonym F. G. Trafford, which she would later change to J.H. Riddell after her marriage in order to reflect her husband’s name.

Though she wrote a multitude of genre’s, Riddell was especially known for writing about ghosts and the supernatural. This particular holiday story, “A Strange Christmas Game,” encompasses many of the traditional qualities of a Victorian holiday story. There is a sense of inclusion between the narrator and listener (better for a collective read-aloud), and as the brother and sister protagonists spend Christmas Eve in a creepy house bequeathed to them, the evening slowly begins to unravel into a game neither of them want to join.

Edward Frederic Bensen was a prolific writer, biographer and archaeologist, and his talent with the latter seems fitting to a career in writing about death and mystery. If you require more of an indication to his talents in the genre, H. P. Lovecraft — master of horror — spoke highly of the author’s work in his acclaimed essay “Supernatural Horror in Literature.”

Bensen’s “Between the Lights” describes a Christmas Eve nightmare come to life. The story’s protagonist reflects on a particular incident that occurred the previous year during a croquet match, when he thought himself stalked by a looming figure and, in pure anxiety-dream fashion, couldn’t seem to move his body. All is fine until this strange memory becomes more and more real during its telling.

And we continue on the “First Initials Plus Last Name” spooky train with A. M. Burrage. Alfred McLelland Burrage was a British author who became widely known for his ghost stories posthumously.

Published in 1931, his story “Smee” came decades after the initial wave of Victorian supernatural stories but appears heavily influenced by tales of that time. Themes of people gathered together, games that take frightening turns and the stifling atmosphere of a large, older house are all present in this creepy account.

The game in this particular story is one like hide-and-seek, only the seeker must approach the hider while whispering “It’s me,” which begins to sound like “Smee” when mumbled fast enough.

Maybe keep the lights on when retelling this one, because that summary alone is enough to give people chills.

Our final initial-baring author is Montague Rhodes James, or M.R. James, who is regarded as one of the best ghost story authors of the genre. Writing in the early 20th century, James redefined the traditional ghost story by moving away from Gothic and Victorian themes and into more modern settings. He even created the “Jamesean Method” of storytelling, which capitalized on a reader feeling as though the scary situation on the page could potentially happen to him or her in real life.

“Lost Hearts” does not take place on Christmas exactly, but spans the whole year in which the protagonist, a young orphan, recounts the behavior of his alchemist cousin who became obsessed with making himself immortal. The presence of ghosts in the house ensues as a result of the cousin’s witchcraft-like dealings.

1.) “A Christmas Carol” by Charles Dickens

Finally, the grandaddy of all Christmas ghost stories: Charles Dickens’ “A Christmas Carol.” We all know, love and hate Ebenezer Scrooge, and its pretty amazing how an 1843 smash hit has managed to instill itself so thoroughly in the Christmas tradition.

Though parts of this tale are scary, the moral themes and holiday imagery are what seem to have had such a lasting effect on our culture. Characters such as Bob Cratchit, Tiny Tim and The Ghosts of Christmas Past, Present and Future not only encapsulated the Victorian ideals of the time, but were developed and relatable enough to become symbols of Christmas for later generations.

What Christmas ghost story do you want to become part of your holiday tradition? Let us know in the comments below!