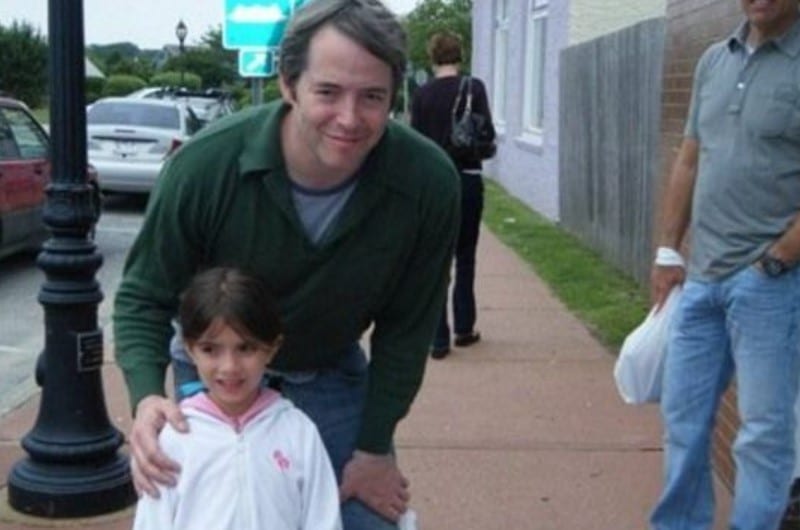 When you imagine encountering a celebrity, you probably picture yourself nervously approaching your idol for an autograph, or, if you’re lucky, you will have an opportunity to pose with your favorite star for a photo. But some celebrities don’t play by the rules.

One man was lucky enough to bump into Matthew Broderick, but he failed to notice that there was someone else in the background. Can you see who it is? Keep reading to find out.

With over 18 million Instagram fans as a testament to the demand for her intimate snaps, Kim Kardashian just couldn’t help herself when female fan Maddie Elburn asked Kim’s husband (Kanye West) for a photo.

Kim photobombed the pair, confirming she’s quite the selfie pro as she looked right into the camera lens.

Now, there are some people who like to take random photos of themselves to mark occasions in their lives.

Take this image for example. This woman asked her husband to snap a picture of her in the parking lot near a local grocery store, oblivious to the fact that Rock God, Steven Tyler, was right behind her. But it’s a good thing that he snapped the picture when he did!

John Krasinski’s career really took off after he starred in the ensemble comedy that was The Office, but he quickly became an action star in Jack Ryan and A Quiet Place.

Possibly his biggest challenge, however, used to be the Curse of the Bambino – the Boston Red Sox’s World Series drought from 1918 to 2004. In this photobomb, taken by a lucky fan at a Red Sox game, he frankly still looks a little worried.

Aaron Paul, most well-known for his role as Jessie Pinkman in Breaking Bad, has made attempts to break out of the role that has defined his career.

However, Coachella attendees may know him as the photobomber-in-chief when he enjoys some much-needed downtime. In fact, Paul has a deeper connection to the festival – it’s where he met his wife, Lauren Parsekian.

While you may feel that this picture is just too perfect not to be planned, apparently it wasn’t!

This couple was snapping wedding photos in Oahu, Hawaii, and Jason Momoa just happened to be in town for the Aquaman premiere and took a stroll on the same beach. When he noticed the wedding photoshoot, he had to get in on that action.

Look very closely at the background of this photo, you might miss it.

The backstory? After a hard day of hitting the slopes in Aspen, Colorado, this guy sat down for lunch at a restaurant. Just down the bar from him, enjoying a family vacation of his own, was musical legend Elton John.

Kim Kardashian might be a selfie queen, but hubby Kanye West looked seriously unimpressed when these Seattle Seahawks fans tried to snap a pic with him.

Ben Pitasky posted the amusing photo above on Instagram with the caption: “Kanye loves the Hawks and being bothered.” The unhappy rapper refuses to look at the camera, keeping his arms firmly folded across his chest!

This woman just wanted a happy-snap of her baby to mark a nice day out. But what she didn’t know was that that family sitting behind her was really Kim Kardashian-West, Kanye, and their daughter North.

The Kardashians really are everywhere these days!

We honestly don’t know what the odds of this scenario ever playing out are, but here it is before you.

We have an elderly lady wearing a T-shirt with the image and name of legendary Guns N’ Roses guitarist Slash. And right behind her, photobombing the heck out of her, is the man himself.

Here, Arnold Schwarzenegger is photobombing Thai tourists in front of the Eiffel Tower while riding a bike.

Even stranger? This was not staged. Arnie was in Paris to receive the Legion d’Honneur medal, France’s highest civil merit established by Napoleon himself. While he was there, he wanted to squeeze in a bit of exercise and, well, there you have it.

It might not be readily apparent who’s photobombing here, but once you know the full story we guarantee you’ll fall on the floor laughing. This dad took his daughter for a weekend getaway in the beach resort of Montauk, New York. As fate would have it, they bumped into Matthew Broderick.

He was nice enough to pose for a photo, but the dad asked Matthew’s buddy to move because he was in the shot. That friend, awkwardly photobombing against his will? An up-and-coming comic named Jerry Seinfeld. We bet he regrets asking him to move now!