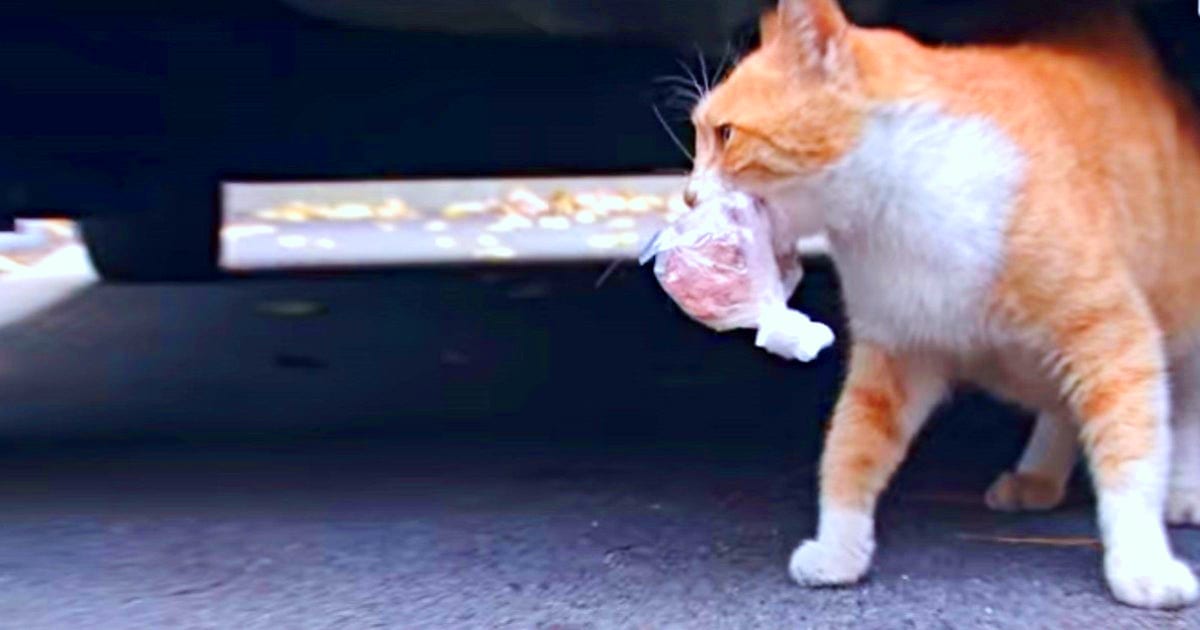 She was speechless, and a swell of emotions flooded her mind. It had taken a lot of effort to follow this cat and figure out the reason for her strange behavior. And now that she knew the truth, she almost couldn’t believe it.

In all her years of taking care of stray cats, she had never seen something like this. But, despite her incredulity, she knew she had to do something about this bizarre situation.

But this old woman had never imagined that her love of cats would lead her to this wild adventure. Living in Seoul, South Korea, she has been around cats her whole life, and she took to them since she was really young.

Five years ago, she moved to an area of the city with many apartment buildings close to each other. The large number of back alleys and terraces makes it a perfect spot for stray cats to congregate. The woman became acquainted with them pretty quickly.

The old lady started feeding the stray cats soon after she moved in. The other neighbors didn’t mind, because it meant the cats would stay away from their windows and not poke around in their trash.

It didn’t take long before all the cats in the neighborhood knew her, and she knew them. But cats are furtive, and she didn’t know all their secrets. There was one cat who was especially intriguing, and it soon caught the woman’s attention.

The woman started to take notice of one particular cat – a female tabby, who started acting differently from all the other cats. When the old lady approached with bowls of food, she would come near and sniff around but didn’t take any.

The woman thought she might have just eaten, but she did the same thing the next day. Then the old lady realized she’d seen that cat before. It wasn’t strange for stray cats to disappear for a while and come back. What was strange was this cat’s behavior.

The woman remembered that the tabby, whom she had named Dong-Sook, had given birth not long before in one of the buildings’ basements. A neighbor informed her that she’d had five kittens but that none of them made it.

The old lady felt sad thinking about that, and assumed maybe the cat was still grieving for her kittens. Could it be that Dong-Sook was so heartbroken that she didn’t even feel like eating anymore?

The old woman decided to try and cheer up the tabby. She bought wet cat food, something she only brought out on special occasions. There was no way that Dong-Sook would refuse such a tasty treat.

She opened the can and placed it on the ground in front of her. The cat stared at the food, looked up at the woman, and meowed. But she didn’t touch the can. Then she did something unexpected.

Taking What She Wanted

As she stood there watching Dong-Sook, the old lady held a bag of dry cat food that she would later give to the other strays. She knelt down to pet the tabby, still bewildered at her refusal to eat.

The cat then reached out with her paw, trying to knock the bag out of the woman’s hand. The woman let the bag drop to the floor. Dong-Sook grabbed it with her teeth and darted away, leaving the old lady scratching her head in confusion.

The woman was still in disbelief at Dong-Sook’s behavior. In her five years feeding strays, she’d never seen one act like that. The next day, she came out armed with another bag of food, wanting to see if Dong-Sook would try to take it from her again.

Just as the day before, the cat took the bag and ran. The old lady still had no idea why, but she was determined to find out.

The old woman had decided to follow Dong-Sook to see where she took the food. She came outside, as usual, with a plastic bag of cat food. She waited for the tabby to appear, and placed the bag on the ground.

As soon as the cat took it, the woman followed, camera in hand. As Dong-Sook led her through narrow alleys, she realized it would not be easy to keep up with her.

The old lady almost lost track of the cat when she jumped up on a ledge onto a terrace. But the woman climbed the stairs and found Dong-Sook, who had now stopped climbing and was instead pacing around the terrace with the plastic bag still in her mouth.

It was almost as if she was waiting for something. Then she saw it: a kitten.

Climbing up the ledge was a small tabby kitten. It walked up to Dong-Sook, who promptly dropped the bag of food at its feet. The kitten proceeded to rip the bag open with its teeth, with such ease that the woman figured it had done it before.

It then ate the food inside, as Dong-Sook watched closely. The old woman realized what this meant.

Clearly, not all of Dong-Sook’s litter had perished. This one kitten survived, and its mother was doing everything she could to keep it alive. The woman was brought to tears by this realization and decided she had to do something to help.

While Dong-Sook was clever and resourceful, the old lady wanted to ensure her efforts would not be in vain so she contacted a local animal rescue group. She wanted to give the tabby and her kitten a better life.

Trying To Catch Her

Staff from the animal group saw the woman’s video and were left in awe of Dong-Sook’s actions. “After suffering, she was attached to the kitten,” said one of them. They sent rescuers to the woman’s neighborhood to find and catch the cats.

It was not an easy task since they were not familiar to Dong-Sook. As a lifelong stray, the tabby would not give in without a fight.

The rescuers trapped the kitten first since it was smaller and more docile. They picked it up with extreme care, to show Dong-Sook they meant no harm. When the time came to catch the mother, she was wary but eventually let them take her.

She knew it was the only way to be reunited with her kitten. The woman was sad to see them go but rejoiced at the thought of what they were gaining.

The group found a home for Dong-Sook and her kitten and bought them a brand new house for them to sleep in. The kitten was excited about all the new, warm blankets, jumping playfully around its mother.

Dong-Sook didn’t show much emotion, but when feeding time came, she finally accepted a bowl of food. It was as if she knew she no longer had to worry about finding food for her little one.