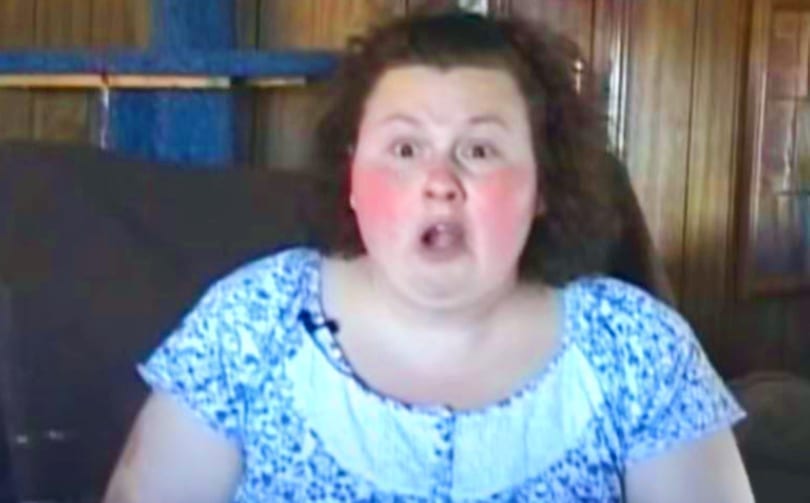 Being a cat-lover herself, her sister had never heard of an incident like this happening. She put her foot down, racing to get Amy to the ER as fast as possible.

As she drifted in and out of consciousness, there was only one thought running through Amy’s mind: how could that sweet cat be capable of something like this?

When Amy Jung and her son Ethan went to visit the Humane Society in Door County, Wisconsin, they had no intention of actually adopting a pet. But according to an interview with the shelter director the next day, 21-pound Pudding “gravitated towards them.”

The cat – who was brought into the shelter after its owner passed away – seemed relaxed and very friendly. It’s common for cats to be put up for adoption after their owners die, so Amy didn’t think much of it at the time.

Amy had a lot of experience as a pet owner and knew it was important to lay down the ground rules when you first bring a new animal into your home. For example, most will be quick to shoo a new cat off their bed to establish boundaries.

But with all the excitement of impulsively adopting Pudding, Amy made a mistake that night that would haunt her for the rest of her life. She left her bedroom door open a crack.

Before she went to bed, Amy made sure Pudding was comfortable and settled before tucking her son in for the night.

As she lay down in bed and gently drifted off to sleep, she didn’t hear Pudding quietly creep into the room. And unfortunately, over on the other side of the house, Ethan didn’t hear her screaming either.

Eventually, Ethan came running and found his mom alone and frightened in her room. With Amy in a state of shock, it was up to the young boy to take action, but he’d never been in this position before and didn’t know what to do. He called his aunt, sobbing for help.

On the way to the hospital, Amy’s sister realized she wasn’t just suffering from bites and scratches. She wasn’t even able to string a sentence together.

After the medics took a look at her, they determined the bites and scratches weren’t too serious. The doctor asked her a lot of questions about her medical history, but when she mentioned the new cat in passing, the doctor looked up from his clipboard with wide eyes.

He’d heard of a similar case once before.

The doctor told Amy the story of a patient in the UK who had complained of chest pains after her cat constantly poked at her.

Amy couldn’t believe what she was hearing. She’d always been a pet lover, but what the doctor was saying made her look at domestic animals in a completely different light.

Meanwhile, young Ethan was sat in the waiting room in pieces. His mom had always said it was good that he was such a heavy sleeper and that he was often “dead to the world”, but now he would have given anything to have reached his mom earlier. Was this his fault?

Ethan perked up when his mom finally emerged from the doctor’s office, but when she sat down to explain what had happened, all he wanted to do was to go back home and find that cat.

Ethan’s mom assured him that everything was going to be OK and that he did everything he could to help her, but he was inconsolable. If he hadn’t begged his mom to take them to the shelter that day, if he didn’t push for them to adopt Pudding, would things have been different?

Pudding hadn’t had an easy life. He’d been in and out of shelters for years because families kept giving him up, so he felt compelled to help. How could a cat really be responsible for this?

Amy explained to Ethan that Pudding had jumped onto her bed when he realized she was suffering from a diabetic seizure. He had nipped her face to wake her up, before running into alert him when he didn’t hear his mom calling for help.

Ethan wanted to empty a whole bag of cat treats into Pudding’s bowl when he got home. He had saved his mom’s life. But the doctor had some bad news for the boy.

Pudding didn’t need to be showered with treats, she needed to be trained. Somehow, Pudding had learned to detect illness in humans, just like the case the doctor mentioned.

Then Ethan remembered Pudding had been brought into the shelter with another kitten, Wimsy. If Pudding could save lives, maybe Wimsy could too. The boy and his mom decided to channel their experience into a new sense of purpose. They gave Pudding and Wimsy a job to do.

With their calm and friendly temperament, Pudding and Wimsy have since become therapy cats, helping people with anxiety and to detect seizures like Amy’s.

“If something or someone hadn’t pulled me out of that,” Amy told the Green Bay Post-Gazette,” I wouldn’t be here.” Shouldn’t we be investing more in training pets like Pudding to help save lives?