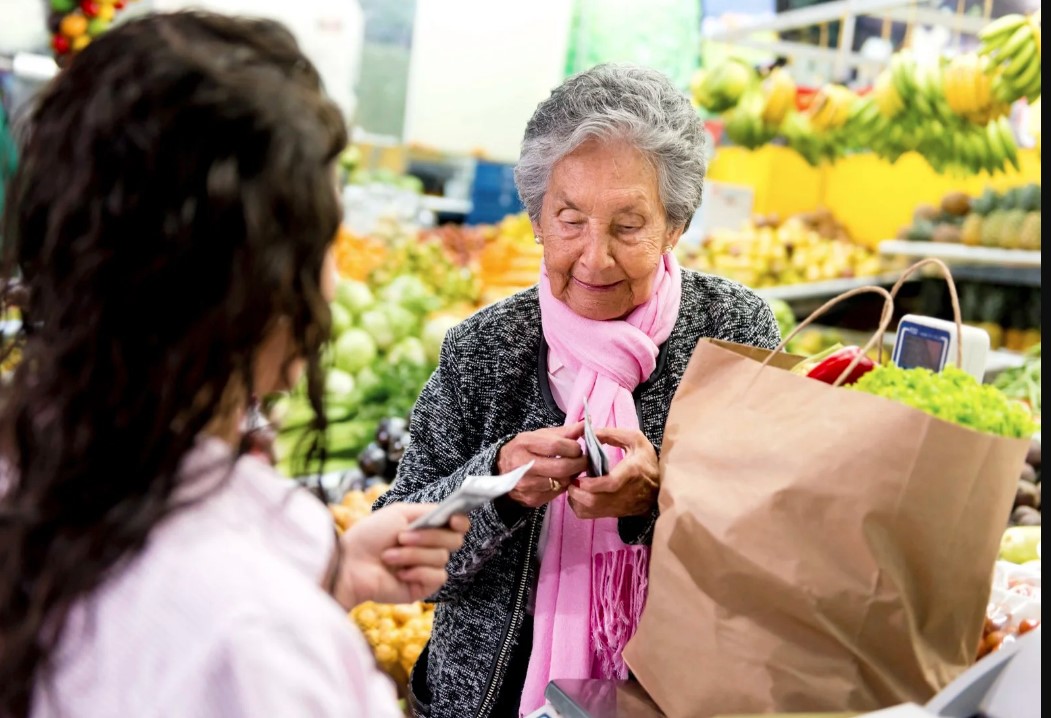 Dorothy was in shock when she heard the woman’s rude comment. She’d been a loyal patron of this store for years and nobody had ever treated her like this before.

She stopped packing her bags, looked at the cashier, and put her in her place. But the woman was relentless. Now, she’d asked for it. Dorothy gave her a withering look, and then she let her have it.

Going to the grocery store is an unavoidable reality for all of us, and Dorothy was no exception.

Even though she was getting on in years, she still did all her own shopping and loaded her own cart. But today, her routine trip would be different – and all because of an audacious cashier who couldn’t keep her thoughts to herself.

She Had Just Wanted To Pay

Dorothy walked down all the aisles with her shopping list in her hand.

Once she was satisfied that she’d gotten everything on her list, she walked over to the checkout counter with her cart to pay for her haul. But when the cashier spoke to her while she rang up her things, she was dumbfounded by what she said.

Dorothy was doing her big monthly shop, so her shopping cart was packed to the brim. She began unloading everything onto the counter and the cashier rolled her eyes. Dorothy knew she’d need some strong bags, so she pulled out the roll she’d brought with her.

As she began to scan the items one by one, she sighed – this was the biggest load of groceries she’d have to deal with all day.

The cashier sighed again and asked Dorothy how many bags she’d need. Dorothy wasn’t sure, so she just pulled a few off the roll and began packing the bags herself.

The cashier went over to help her, but she was clearly very annoyed. “You know,” she berated, “plastic bags are not good for the environment!”

Dorothy couldn’t believe her ears. She’d been coming to this grocery store for years and nobody had ever taken her to task like this before.

She stopped what she was doing, looked the cashier in the eyes, and simply said “We didn’t have this ‘green thing’ back in my day.” Thinking that would be the end of it, she started packing her bags again.

But the cashier, thinking she had the upper hand, continued to belittle Dorothy.

“That’s our problem today. Your generation did not care enough to save our environment for future generations,” the woman snapped. Dorothy was in shock. She didn’t have to take this. She looked at the woman carefully. Then, quick as a whip, she finally let her have it.

“Back then, we returned milk bottles, soda bottles, and beer bottles to the store,” Dorothy replied.

“The store sent them back to the plant to be washed and sterilized and refilled, so it could use the same bottles over and over. So they really were recycled. But we didn’t have the ‘green thing’ back in our day.” And she didn’t stop there.

Taking Her Down A Peg

“Grocery stores bagged our groceries in brown paper bags that we reused for numerous things. Most memorable besides household garbage bags was the use of brown paper bags as book covers for our school books, Dorothy continued.

“This was to ensure that public property (the books provided for our use by the school) was not defaced by our scribblings. Then we were able to personalize our books on the brown paper bags. But, too bad we didn’t do the ‘green thing’ back then.”

By now, there was quite a long line behind Dorothy. The cashier just wanted to get rid of her so she could serve the other customers.

Some of them were getting impatient with the delay, but others seemed to be struck by Dorothy’s words and were eagerly listening to what she had to say. And she wasn’t done yet.

Dorothy continued talking as she packed her cart. “We walked up stairs because we didn’t have an escalator in every store and office building. We walked to the grocery store and didn’t climb into a 300-horsepower machine every time we had to go two blocks. But you are right. We didn’t have the ‘green thing’ in our day.

Each statement hammering home the fact that in many respects the older generations lived much ‘greener’ than modern generations.

Dorothy was in full swing now and continued going. Most of the customers had fallen silent at her words.

“Back then we washed the baby’s diapers because we didn’t have the throw-away kind. We dried clothes on a line, not in an energy-gobbling machine burning up 220 volts. Wind and solar power really did dry our clothes back in our early days. Kids got hand-me-down clothes from their brothers or sisters, not always brand-new clothing. But, young lady, you are right; we didn’t have the ‘green thing’ back in our day.”

One TV, One Radio

In modern society, TV has become a central part of the so-called ‘nuclear family’. It took merely a decade since they were available on the mass market for TVs to be in almost every home.

Dorothy realized that she was holding up the queue, but it was clear that the people were taking note of what she said.

Many of them were smiling at the anecdotes she was sharing while the cashier was still at a loss for words. No one knew what she would say next. She saw her chance to finally drive her point home.

Doing Everything By Hand

She moved her tirade into the realm of the kitchen and the ways they prepared food.

“In the kitchen, we blended and stirred by hand because we didn’t have electric machines to do everything for us.” Then, Dorothy turned to the people behind her in the queue, flexed her arm, and winked. Then, she continued.

“Back then, we didn’t fire up an engine and burn gasoline just to cut the lawn. We used a push mower that ran on human power,” Dorothy said.

“We exercised by working so we didn’t need to go to a health club to run on treadmills that operate on electricity. But you’re right; we didn’t have the ‘green thing’ back then.” But Dorothy still wasn’t done.

As she placed her bag into her trolley Dorothy talked about both public and private transportation.

“Back then, people took the streetcar or a bus and kids rode their bikes to school or walked instead of turning their moms into a 24-hour taxi service in the family’s $45,000 SUV or van, which cost what a whole house did before the ‘green thing.’”

Then, Dorothy went on to talk about the devices that have control over virtually every aspect of our lives.

“We only had one outlet per room, not an entire row of plugs to power more than a dozen electrical appliances. And we didn’t need a fancy gadget to get a signal from 23,000 miles in space to find the closest burger joint.”

At A Loss For Words

By now, the people in line were all slowly nodding their heads. And the condescending cashier?

She was staring at Dorothy, flabbergasted and at a complete loss for words. Dorothy had only been talking for a few minutes, but the woman didn’t have a single retort. She was hoping that Dorothy would just leave her to get on with her day. Maybe that would teach her to keep her smart mouth to herself.

Dorothy finally finished her tirade and walked away, calmly pushing her brimming cart to her car.

But what she didn’t realize was that someone in the line had recorded everything she had to say. She drove home and didn’t give the incident another thought. She never expected her insightful speech to have the impact it did.

In just two days, Dorothy’s speech had gone viral. The person who recorded it in the grocery store posted it on Facebook word-for-word.

People just couldn’t get enough of the feisty older lady’s response to the rude cashier and the amazing glimpse of life back then. It wasn’t long before the story racked up a staggering 2.2 million shares and views.