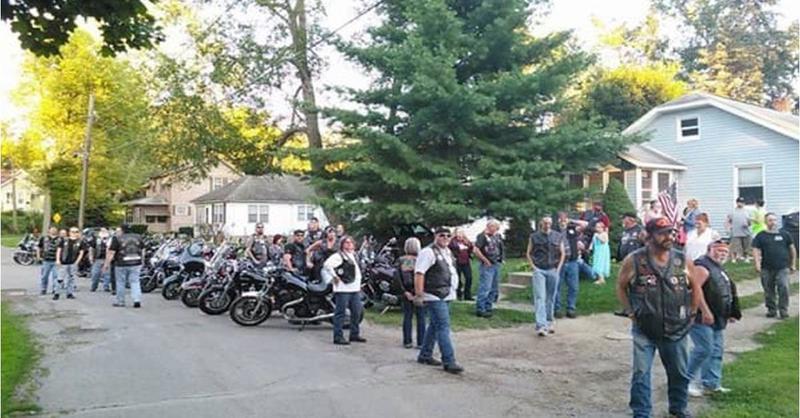 It was finally the night she had been dreading for ages. She stood in front of the mirror and noticed how badly her hands were shaking. She was was panicked. Her dress was tightly squeezing her chest and a hot flush was creeping up her sweaty neck.

She looked down at her feat when the first few tears began to roll down her flushed cheeks. She wiped at her cheeks and headed for the door before running to her mom, sobbing loudly. She had no idea at that time that the bikers were about to come knocking on her door.

Shannon Purcifer was just like any other 16-year-old girl. She couldn’t wait for prom. She was excited to spend a night out with her boyfriend in a beautiful dress.

But things would become a lot more complicated than she thought they would. For years now, Shannon had been struggling with a variety of health conditions. But surprisingly, her illnesses weren’t what was stopping her from having her dream prom night.

Shannon was fighting a brutal battle against celiac disease, ulcerative colitis, and rheumatoid arthritis. It was no surprise that she had spent years in and out of hospital because of these illnesses.

To make things were, the people in her school had no sympathy for Shannon or her illnesses. She got bullied on a daily basis and it had been going on for years. It felt like things couldn’t get any worse than this.

Ulcerative colitis is a bowel disease, in which the innermost lining of the large intestine becomes inflamed. The disease and symptoms become worse as time passes.

There is no cure for this disease. Shannon and her family had to come to terms that Shannon would be struggling with this for the rest of her life. But there was another aspect that none of them were able to accept.

Stress caused by the bullying at school would cause flare-ups with Shannon’s bowl disease, which made her condition even worse.

It was a cycle that she was forced to live with. It was astounding that she had managed to stay positive about this for so long. That is, until one horrible day.

Shannon was as excited about prom as any other girl would be. She couldn’t wait. Her and her mother had gotten her the perfect dress months in advance. The dress was floor-length and gorgeous. It had lace detailing and cost about $600.

But something happened just months before prom night, and it left Shannon’s prom dreams shattered into tiny pieces.

Shannon had three siblings and an amazing, supportive family. They helped her so much while she was struggling with her illnesses.

Her family were able to pick up on the effects that the constant bullying had on her mental health. In the weeks leading up to her prom, Shannon had grown timid and withdrawn. She wasn’t herself anymore.

Claire, her mother, watched as her attitude and behavior changed. She recalled that time in Shannon’s life, “It was horrendous,” she sighed during an interview.

Her mom had tears in her eyes as she said, “It’ was going on for so long. I tried so hard to make it stop, but the school didn’t help us. I felt powerless, really. There wasn’t anything I could do but listen to her.” But the situation reached its boiling point on the night of prom.

On prom night, Shannon shocked everyone when she revealed she’d had a change of heart. She approached her mom with tears streaming down her beautiful face and splashing across her dress.

“I didn’t really want to go and feel nervous for the entire night. I didn’t want to miss out and wanted to enjoy it with my friends, but the bullying got worse and worse.” Shannon spoke softly during an interview.

Shannon decided not to attend her prom. She thought it was for the best.

She couldn’t stand the thought of them tormenting her on one of the happiest nights of her life. But that was when her mom snapped the photo that would change everything.

Shannon’s mom decided to post the photo on Facebook. “If Shannon had gone to her prom tonight she would have worn this beautiful dress. Thanks to those mean, vile bullies Shannon decided she didn’t want to go and mix with those that made her life so unpleasant,” she wrote.

“For a girl that has had so much to deal with in life…. ulcerative colitis, and rheumatoid arthritis, she is one strong young lady with an even stronger mind!! Love you girl.” Little did she know, the post would go on to touch the hearts of so many.

Kerri Louise Kimber, one of Shannon’s friends, decided that she would throw Shannon her own prom, and only those who are close to her would attend. Claire thought it was a great idea and created a Go Fund Me page to raise funds.

In just a few days, their page went beyond their goal, $650 of $195! Shannon’s prom would only have 100 people. Her entire family will also be able to join in the celebration and attend her prom with her. But that wasn’t all…

On the night of Shannon’s special prom, she got her nails, hair, and make-up done. And when it was time for her to leave, there were 120 bikers waiting for her!

The group had seen the now-viral post and offered to personally escort her to the venue! “There’s no better way to stand up to the bullies than to go out and live life to the fullest,” Shannon’s mom explained. And Shannon described her exclusive prom as “better than I could ever have dreamed!”