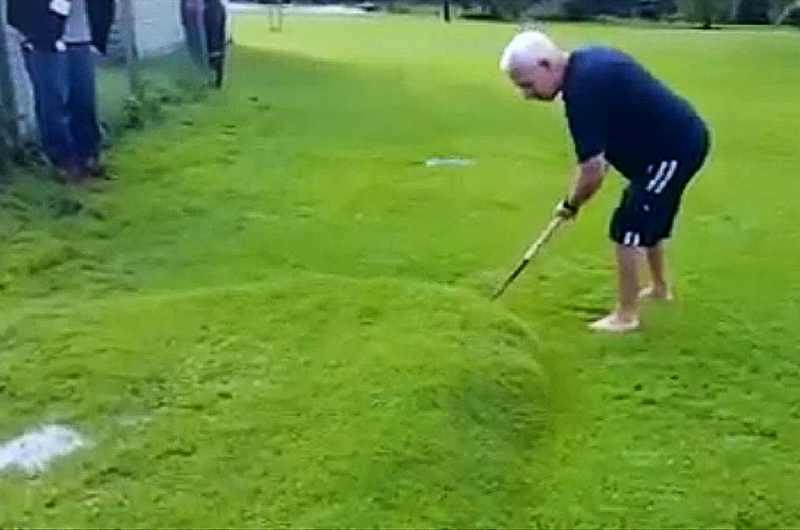 He heard a strange sound coming from somewhere on his property. The noise was nothing like anything he’d heard before. He followed the noise to his backyard, where what he saw made him stop in his tracks.

He sprinted to his shed where he found a sharp garden tool. He decided to prod the grass with his tool and watched in horror as the patch moved on its own.

Sarah and James Carlington were enjoying their Sunday morning. They had just returned from the morning service and that’s when they noticed their yard was a little different than before.

James loved to look after his garden, after all, he was a family man. Sunday mornings were normally for tending to his garden or doing odd jobs around the house.

It was a beautiful clear day in Cambridge Springs, Pennsylvania. There were warm winds on the rise after it had stormed the previous night.

This day however James wasn’t feeling as rested as usual. The storm had kept him up through the night. But still, he needed to endure so he could get some garden work done. But he had no idea that there was something waiting for him in the yard.

James and his wife quickly ate breakfast so they could make it to the 10 AM service like they did every weekend. They looked forward to a relaxing Sunday doing small chores around the house.

After the service ended James was already doing a rundown with his wife on what chores he was going to do on his Sunday. Because his kids had moved out he only had his yard to look after these days.

James pulled into their driveway and parked the car. He got out and closed his door, then he heard something strange.

“Do you hear that?”, He turned to his wife and asked. “Yeh, what is that?”, she replied. The sound was nothing like anything they had heard before. James decided to investigate.

He walked around to the back of his house. The noise was definitely coming from his yard. When he noticed what was making the noise, he was frozen in his tracks.

The grass in front of him appeared to be getting bigger. There was a lump forming and James could only watch with his mouth open as he wondered what it was.

He prodded the thing with his foot and as it moved he stumbled back in fright. Then his wife came around to see what the fuss was about.

James decided to jab it again, it wobbled like jelly before returning to a stationary state. But then he did something else.

Not All Fun And Games

“What the hell? It’s like a bubble or waterbed!”. He decided to tackle this himself. He put all of his weight on a vibrating mass.

James was actually enjoying himself jumping on the mass. But he heard a sound that would stay with him forever on the third jump.

Setting Up A Camera

He heard the “bubble” pop as the lump got even bigger. James jumped off of the object and hoped he hadn’t made it worse.

His wife started rolling the camera as he tried to burst it. But what they would get on her camera would be like nothing they could have expected.

Sarah got out her camera while James got an umbrella from the side of the house. He started to prod the mysterious lump. But nothing happened. He needed something stronger.

He sourced a garden tool and resumed poking it. “What if snakes come out? ”, his wife joked. What hid inside, however, was much more frightening than snakes.

He stood on top of the mysterious mass again and started to pierce the grass harder. The hissing sound began to fade and fade until suddenly, there was another loud pop.

James steadied himself as the grass churned and he felt a big ‘whoosh’ beneath his feet. His eyes widened as he watched what happened next.

James finally managed to pierce through the grass and burst the giant bubble. James and Sarah watched in amazement as murky water came gushing out. It continued to run from the ground like an endless water fountain.

But the entrancing earth fountain wasn’t all this bubble would reveal to them.

After fifteen minutes of watching his yard expel water from its underbelly, James began to notice something strange.

On the opening hole, a black piece of plastic stuck out from beneath the grass. James approached the hole and grabbed the piece of plastic. He tried to pull it out but it wouldn’t budge. It looked like the edge of a black trash bag.

“What is that?”, he wondered. He waited until all of the water drained from the strange bubble to find out.

He looked around at his garden which was now flooded. A small river flowed from his yard to the street. But the mess was the least of his problems.

James went into his garage and brought out a shovel. If this plastic bag was the cause of this strange phenomenon, he needed to remove it.

He dug into his beloved grass one shovel at a time until he reached the culprit. He reached his hand in and tried to pull it out again. But even though the plastic bag looked like it had been there for years, it was still as tough as nails.

Confused, James realized that the plastic bag was much bigger than he thought. He continued to dig, hoping to find its end. He followed the plastic bag with his shovel until he stood at the end of his grass.

James had no idea what was going on. He walked over to the other far end of his yard and started to dig.

It was as he expected. The black plastic lay under his entire grass like a giant sheet. But why?

James walked back to the other side where he had dug a line from the center of his garden to the edge. He took out his pocket knife and pierced a line in the plastic sheet. What he found was staggering.

Desperate to understand what was hiding beneath his very own garden, he pulled the plastic sheet back. A strange smell began to woft through the air.

His eyebrows knitted at the site of the old and dirty wooden planks that came into view. James didn’t remember seeing anything like this outlined in the blueprint of his house when he bought it 50 years ago. Things were about to get stranger and stranger.

James called for his wife who had given up filming some time ago. Preferring instead to begin some house chores. She walked to James’ side, astonished at what he did to their garden.

There was mud and holes everywhere but just as she was about to give out to him, she saw what he was staring at. She grew silent, scrunching her nose at the smell. “What is all this James?”, she asked.

“I have no idea”, he replied. “It looks like some sort of structure”. “We weren’t told about any of this when we bought the house, right?”, he asked.

“Honey”, Sarah interrupted. “That looks like a door handle”. Alarmed, James turned. “Oh my word. It does”, he agreed. His heart started to pound. It was becoming obvious that his garden was anything but ordinary.

James grabbed his shovel and started around the area. Then he grabbed his knife and ripped back more of the strange plastic covering.

His wife stood close by as he tried to prise open the bizarre door. His mind raced with theories as he used all of his strength to open it. Was it a bunker? Some kind of ancient ruin? He started to sweat with anticipation.

When the door finally gave way, James couldn’t believe his eyes. It opened up to wooden stairs that had fallen apart.

James’ heart thumped as chills ran down his body. He grabbed his flashlight and asked his wife to hold his ankles. He lay down and dropped the front half of his body down.

It looked like it was an old small wine cellar. There were still some empty bottles lying around. The place looked completely abandoned. And it smelled like sour milk or fermented fruit.

It was obvious that no one had entered this place in a very very long time. It was definitely the source of the strange smell. When James managed to grab a bottle, the date left him speechless.

It was dated in the early 20th century. After a painful search for his house’s history, he discovered that the wine cellar had to be closed up because it was built without planning permission.

But what about the giant bubble and plastic?

As James and Sarah later found out, the plastic sheet was the easiest way to recover the yard’s appearance and reintroduce fertile soil without having to write a pricey check to demolish the structure and buy soil from scratch.

They learnt that the mysterious grass bubble was a phenomenon known as a ‘lawn blister’.

The plastic is placed over the bad soil and new fresh soil is placed on top where grass will then grow and flourish. But here’s how the strange occurrence happens…

Although rare, water can sometimes find its way under the plastic layer and get trapped. The water will continue to build with nowhere to go causing the grass to grow and rise with the mounting pressure.

In James’ case, the night of thunderous rainfall did the trick. Luckily, there was no burst pipe, but did James put himself in danger bursting it?

Although they may look threatening, they aren’t dangerous but that doesn’t mean you shouldn’t be careful.

Depending on the size of these lawn blisters, they can end up flooding your lawn. So make sure to pave a path for the water to drain to avoid ruining your yard with excessive water. And even though James dealt with the situation well, not everybody agreed…