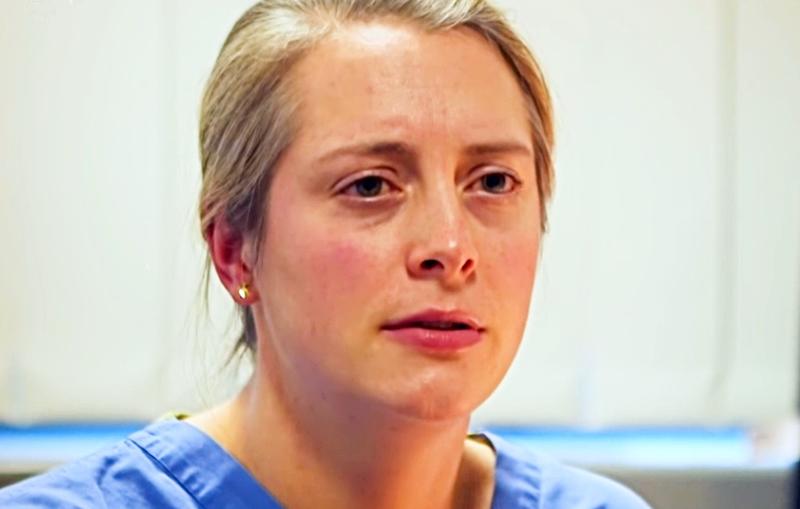 The nurse turned to the doctor. Her jaw was open wide as she looked up from what she just read. She held a copy of his scan in her hands. The doctor walked over to her, curious as to why she was reacting in such a way. She handed him the paper and his eyes popped.

He understood her reaction now. He had never seen anything like this.

Rob Wall and his wife, Shelley Wall, lived a very happy life together as a married couple. They lived in Cumbria, North West England, and couldn’t be happier. They raised their two daughters together and felt that they lived an idyllic life.

They felt that they raised their kids right and had a lot of love in their house. With so much love, they knew that there was one thing they could do to make them feel better.

They decided that they needed to have another child. After the decision was made Shelley became pregnant and they were ecstatic.

With two daughters already, the couple hoped that they would have a boy. Rob would be happy bonding over football with a son where his daughters weren’t interested. But everything changed when they got to the doctor’s office.

Results Of The Scan

They visited the hospital for regular checkups during their pregnancy. Both the mother and the baby’s health had to be watched closely.

Shelley and Rob already knew all of this, this was going to be their third child after all. But something would present itself that they had never encountered before.

Their next visit to the doctor didn’t go well at all. It seemed that the boy growing inside of Shelley had an abnormality in his head. He only had 2% of his brain.

With the news, the couple instantly decided what they wanted to do. There was no hesitation, not even a question.

Shelley and Rob were devastated. They knew that the quality of their child’s life would be much worse than they anticipated. The doctor explained what kind of life the boy would expect to live.

Noah’s birth defect was that he grew no brain matter and had spina bifida. This meant that his spinal cord didn’t form properly. But then the doctor suddenly proposed something radical.

The doctor felt that the right option wan’t the one the young parents wanted to hear. This would be a very hard decision for Shelley or any mother to make.

They explained that Noah would require around-the-clock care and his life expectancy wouldn’t be very long. What kind of life did they want for their child?

The couple had to think long and hard about this. When they got home they looked at their girl’s happy faces. They couldn’t bear to break the news.

They loved their children and never wanted to see them upset. But in this Shelley and Rob had their answer. They would bring this new life into the world.

Maybe in their younger years, they might have considered abortion. But after having their two daughters, they knew that they would love their child no matter what they were like. But five times during her pregnancy, she was advised to have an abortion.

Shelley stayed stoic and Rob stood by her. Even when the harsh reality of raising Noah came to light, they stood together in their decision and didn’t look back.

Shelley didn’t doubt her decision even for a second. She went through with the pregnancy. There was no looking back now.

From the very start, the odds were against them. But the couple wished and prayed that their child was strong enough to make it. It’s a good thing they put their hope in him.

On March 6, 2012, Noah came into the world via c-section. Shelley knew what to expect. Doctors had warned the family that their son would be paralyzed from the chest down and could be born with other abnormalities.

Despite her fears, Shelley couldn’t wait to meet her son for the first time. There were 12 doctors in the operating theatre, but as he came into the world, they were given a sign.

Noah let out a big, healthy scream the moment he was born, letting his parents know that he had arrived.

To give him a fighting chance, a doctor placed a shunt in Noah’s skull to drain the excess fluid and relieve the pressure on his brain tissue. His parents could only wait and see how he developed.

Shelley and Rob had no expectations for Noah in the early days of his life. They were simply happy that their boy was healthy and happy.

What’s more, Noah was able to breathe, eat, and drink because his brain stem was intact. He was paralyzed from the waist down but this never seemed to affect his mood. He was a happy little boy. It made Shelley and Rob wonder how Noah could be thriving with so little of his brain.

Noah was developing at a rate that could hardly be explained. Before his birth, doctors warned that he would have severe special needs.

Yet he was coming on three-years-old and didn’t seem to be behind most kids his age. He was aware of everything going on around him, appeared emotionally intelligent, and he was even starting to talk. Another trip to the doctor’s office was required.

With Noah collecting milestones like leaves from a tree, his parents wanted to know how his brain looked. A second scan had to be taken.

The nurse came back from the other room with the scans and looked visibly shocked. ‘You’re not going to believe this,’ she said.

The doctor took the scan from the nurse and put on his glasses. Fixing them at the top of his nose, he examined the scan. ‘She’s right,’ he said. ‘I can hardly believe this.’

Doctors and nurses are no stranger to bizarre medical phenomonens but they had never seen anything like this. What had they discovered that had caused so much shock?

Shelley and Rob couldn’t believe what the doctor was telling them. Nobody could have prepared them for the scan that this doctor had.

“It’s a very emotive subject. Some people say you can’t grow a brain, some say his brain was there, all squashed up, so when he’s had his shunt fitted, it’s gone back to where it should be,” Rob told Good Morning Britain.

“But if his brain was so squashed up, he should have been so severely mentally disabled.” So how had Noah’s brain grown?

Dr. Gregory Scott, a neuroscience researcher at Imperial College London, believed that the shunt had made space for the brain to grow.

Yet this was only a theory. Scott couldn’t prove it and thus it shows how little we truly know about one of our most vital organs; the organ that keeps everything ticking – the brain.

But the ‘how’ behind the miracle of Noah’s brain wasn’t too important to Shelley and Rob. They were simply delighted by what was. And they knew the next steps to take.

“To hear his brain’s almost back to normal is beyond belief,” Shelly Wall said.

“Rob and I broke down when we heard the news. It was like a dream. I’ve never known anything like it. Even the consultants were in tears. Every time we see the doctors, they just shake their heads. They’re just amazed at what he can do,” she continued.

Noah’s parents and older sister Steph, 23, work hard to always be around him. They continually keep his brain stimulated, to aid its growth – his family call this “brain-training.”

Brain training is also known as cognitive training and is used to maintain and improve cognitive abilities by performing regular activities.

By the time Noah was four years old, he was able to go to school, could count to 10, read, and talk. He can even use a pen.

He has overcome several challenges already that no one thought he would even be capable of. And little Noah wants to become a firefighter when he grows up.

Shelly told the Chronicle Live in 2017: “Noah’s doing amazingly well—he can write, he knows how to spell his name, he can hold a conversation.”

Noah was quickly proving his doctors and other medical professionals wrong. Nobody could have predicted what would happen next.

“He has been chatting so much more and pronouncing his words,’ Shelly explains in the show. He has started writing, he can follow my finger and write his name.”

“His concentration was just unbelievable with the pen, I didn’t know that this day would ever come. You can see the excitement, and he knows that he had done something amazing… he amazes us every day.”

Mr. and Mrs. Wall have dedicated their time to his brain development and have taken him to Australia to a radical brain training center. Noah now wants to learn to walk and wants to continue learning how to surf and even start skiing.

Noah’s story received a lot of media attention. His story was uplifting and made people hopeful.

Noah continues to undergo ‘neurophysics’ treatment, a combination of physiotherapy and cognitive exercises that include horse riding, surfing, and even skydiving. They even had a belief that Noah would still be able to walk in the future.

For the whole family, things appeared to be looking up.

Mr. Wall explained that the experts don’t usually give the therapy to kids because of the cognitive side of things but they were lucky enough to be able to persuade them to see and assess Noah and prepare them for when he’s old enough to have that cognitive treatment.

All in all, the little boy’s future looks bright and his story teaches us an important lesson.

Writing on the Hugs for Noah website, Shelly said she hopes Noah’s case will raise awareness about the importance of taking folic acid during pregnancy. This can prevent spine and brain defects such as spina bifida and anencephaly.

According to the Centers for Disease Control and Prevention, women who wish to conceive are advised to consume around 400 mcg of folic acid per day. “Even though I took it I didn’t take it early enough,” she wrote, “No one told me just how important folic acid was.” But that’s not all…

A Testament To Human Hope

Without getting into a debate about the ethical arguments around abortion, we can say that Noah’s story is one of human hope and positivity.

His parents were told that looking after Noah would be tough. And while taking care of him isn’t easy, there’s not a day that goes by without them thanking their lucky stars. They had faith in their boy and they are being rewarded with a starring role on the most fulfilling of journeys.