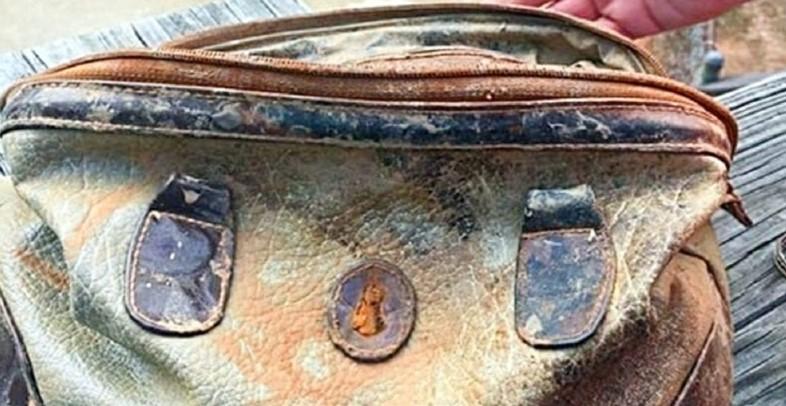 His uncle watched with curiosity as he unclasped the purse and peered inside. Everything inside was damaged by water. But there was something astonishing inside.

The photo was worn but after he wiped it he could see what it was. The two immediately knew what they had to do. They called the only number they could – 911.

Brodie Brooks was over the moon when he got a fishing pole for his 11th birthday. He went fishing with his uncle often but now he had his very own rod!

But things would soon get even more interesting as he would find something quite unusual on the end of his rod.

Brodie and his uncle Ben Myers got onto Lake Hartwell with their boat and got ready for a good day of fishing. He loved talking to his uncle about his life while they patiently waited.

Brodie just watched his rod, having no idea of what the day had in store for him. He’d end up calling the police.

His uncle had taught him everything he knew about fishing. He was proud of his nephew when the rod started to bend – it was his first-ever catch!

But nobody knew that things would turn from pure joy to concern after they saw what young Brodie would catch. Things would take a dark turn from there.

Bridie remembers it clearly, “I felt like it was a big fish because it was bobbing my rod up and down,” he said. “I’d just gotten an Ugly Stik, so I was scared I was gonna break my rod. I was scared the line was going to snap.”

After wrestling with his catch and finally reeling it aboard, it wasn’t quite what he expected.

It was a purse. At first, he was upset that it wasn’t a big fish like he hoped. But then he realized it was heavy. There must be something inside.

Brodie’s uncle watched as he hauled the soaked mysterious object from the water. He cleaned it, revealing a lovely colorful design. As the purse began to take shape, so did Brodie’s imagination.

He wondered about what kind of treasures he would find inside. Little did he know, there was a lot more than treasure awaiting him.

There was no doubt the purse was old, but there was one item inside the purse that would give astonishing evidence as to how old it truly was. He opened the purse and peered inside.

Brodie opened the purse as his uncle Ben stood over his shoulder, watching. The contents were all water damaged, but there was one item that Brodie’s uncle was shocked to see.

“We might catch a can here, or something like that. But as far as a woman’s purse, that’s a first for me,” Ben said. “I’ve been fishing on this lake all my life, and that’s the first time I saw something be caught like this.”

Ben was surprised to see many photographs among lipsticks and other womanly items within the purse. Although the photos were damaged, it was still possible to just about make out what was pictured. Ben and Brodie looked closer.

Ben jumped back as he realized he recognized the faces in the photos. Faces that hadn’t seen the light of day for a long time.

Two questions were burning in the back of Ben’s: how long ago was this purse plunged into the lake? And where could the owner of the purse be? Ben began to grow suspicious.

He asked Brodie to help him spread the photos out so they could dry. Then he realized he could be tampering with evidence, he quickly called the police.

Ben knew this face, even Brodie said he recognized it. “She was a friend of the family. I went to school with her nephew, but I haven’t seen her in ten years,” Ben said.

How could this woman he knew have their purse in the lake? How long was it at the bottom of the lake? Worry set in as Ben realized that this might be proof of something and he was interfering with police business.

After they alerted the police to their mysterious finding, Ben scoured the internet in search of the woman that seemed to have disappeared.

It wasn’t long until he managed to find her nephew, who was shocked to hear Ben’s story about the purse. The nephew wasted no time in calling his Aunt to relay what Ben had told him. What happened?

The purse’s owner was April Bolt, now 49 years old. She couldn’t believe that her purse had finally been found. “I couldn’t believe it. I was lost for words. You never think you’d see it again,” she said in an interview.

She had lost it back in 1992 – an unbelievable 25 years ago! But April believes that her purse disappeared under suspicious circumstances.

April had attended a cookout back in 1992 at Lake Hartwell.

“We were on the boat and my parents had a condo there and we were grilling burgers and we parked the boat in the slip… There were two guys there fishing and – I hate to accuse anybody – but when we got back I was like, ‘My pocketbook is gone!’” she explained.

At the time, April had been devastated. “I was crying… It wasn’t a whole lot of cash – maybe like $60. But a woman fits her whole life in her purse. It was devastating,” she said.

“My favorite lipstick was in there and the color was discontinued.” But it wasn’t the lipstick or the cash that April was most upset about losing.

Among the items that Ben had found inside the purse were baby photographs of her son.

“My son is 26 now, but he was 15 months then, and I had all his photos that were professionally taken in my wallet. They have water damage but you can make him out,” April said tearfully.

When asked about their amazing catch that day on Lake Hartwell, Ben and Brodie still can’t quite believe it. “It was pretty wild,” Ben told ABC News. “You fish up a purse – for one – then you actually know whose it was…”

Brodie, on the other hand, hadn’t been as thrilled as his uncle to have caught an old purse instead of a fish.

The boy’s disappointment was all over his face when they reeled in the leathery old purse. But it was Ben who had recognized the catch for what it was.

“I told him, ‘You ain’t got no fish, you got a treasure!’” Ben recalls, laughing. But what did April think about being reunited with her belongings that had been missing for over two decades?

She simply said that the purse’s recovery “meant the world to her.” But she still has some unanswered questions. Firstly, had her purse really been stolen all those years ago? And by whom?

Firstly, had her purse really been stolen all those years ago? And by whom? Secondly, she wonders why it has been returned to her now. She believes that the universe must have its reasons.

“Everyone keeps telling me, ‘There’s got to be a meaning to why you’re finding this so many years later,’” she reveals. “I’m sure God will reveal that in time.”

Meanwhile, she is enjoying the memories that the items in her purse have brought back. “It’s just so precious to have it back,” she happily concluded!