Array ( )
Top5 » Trending » Boy Fishes Out Old Purse From Water, Acts Fast When He Peeks Inside

Boy Fishes Out Old Purse From Water, Acts Fast When He Peeks Inside 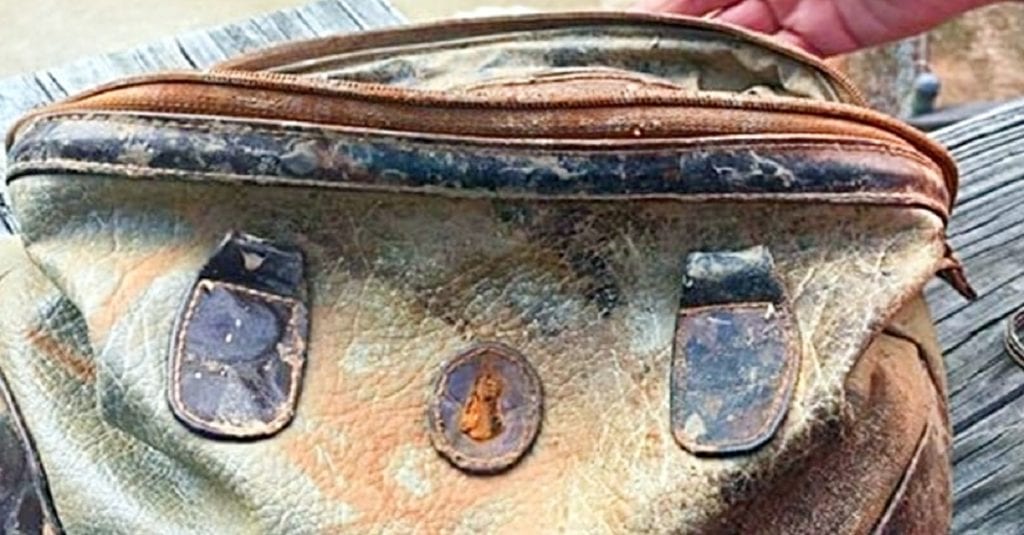 He turned to see what all the yelling was about and saw the fishing rod bend into the telltale curve that meant something big was on the other end. Rushing to help his nephew gain control of the line, he wasn’t prepared for what they had caught that day.

The leathery and waterlogged shape came into view, and that’s when the other fisherman saw that it wasn’t a fish at all 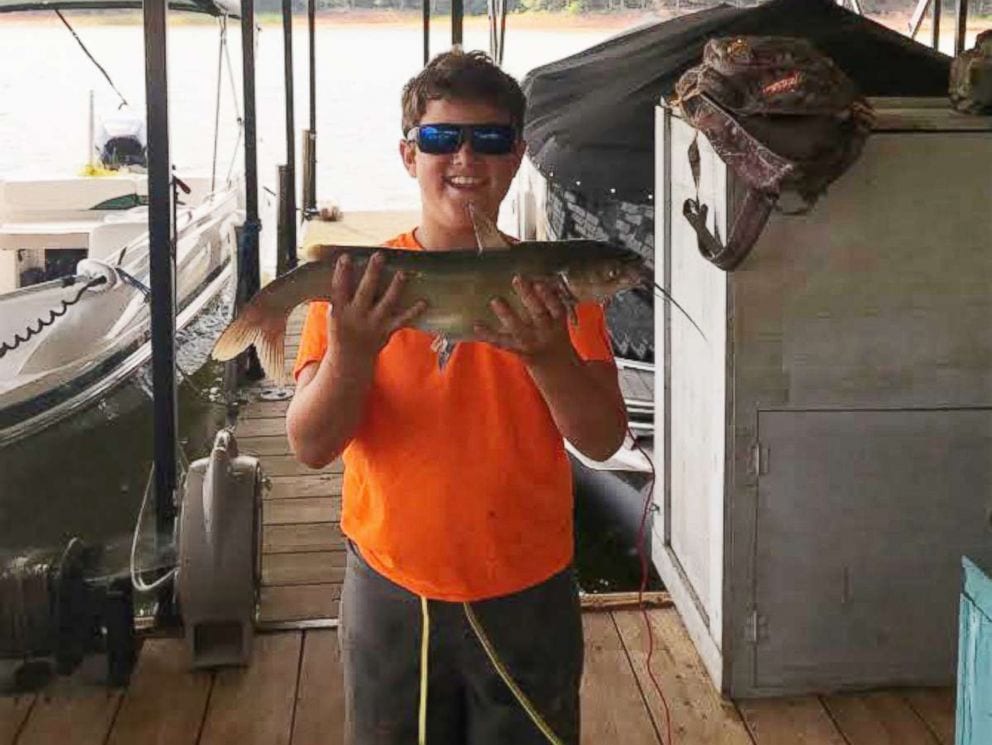 11-year-old Brodie Brooks couldn’t contain his excitement at the thought of going fishing with the boys. With the new rod he’d just received for his birthday, he was ready for the adventure of a lifetime.

But nobody on that fateful fishing trip could have expected to reel in an old purse with all its contents still inside.

Waiting For A Bite 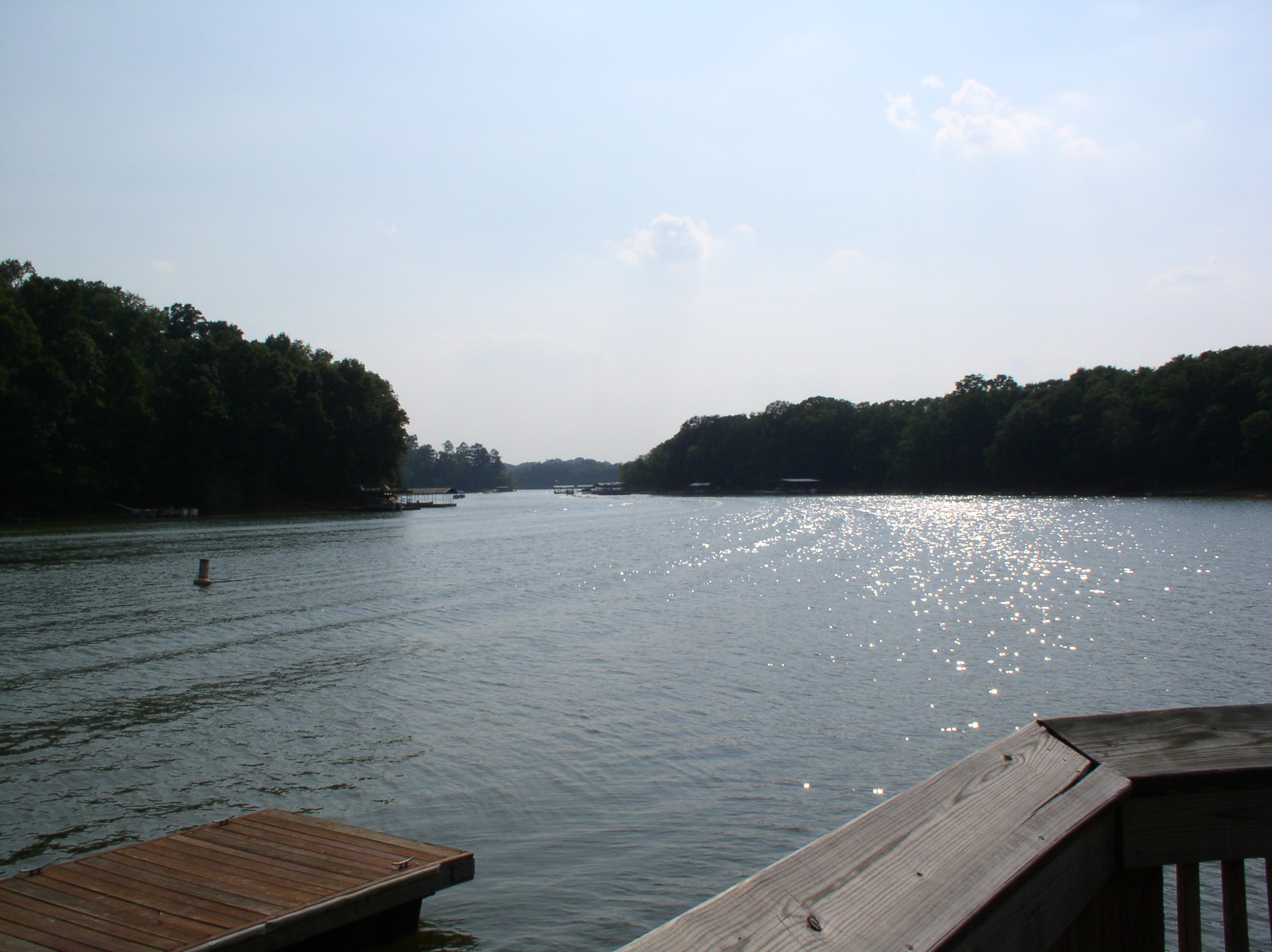 The men had taken their boat out to Lake Hartwell in Anderson County, SC in hopes of landing the catch of a lifetime. After setting up their rods and settling in for the day, the men lazily exchanged the usual banter while they waited for the first bite.

Little did they know, the catch of the day would send them running to the police. 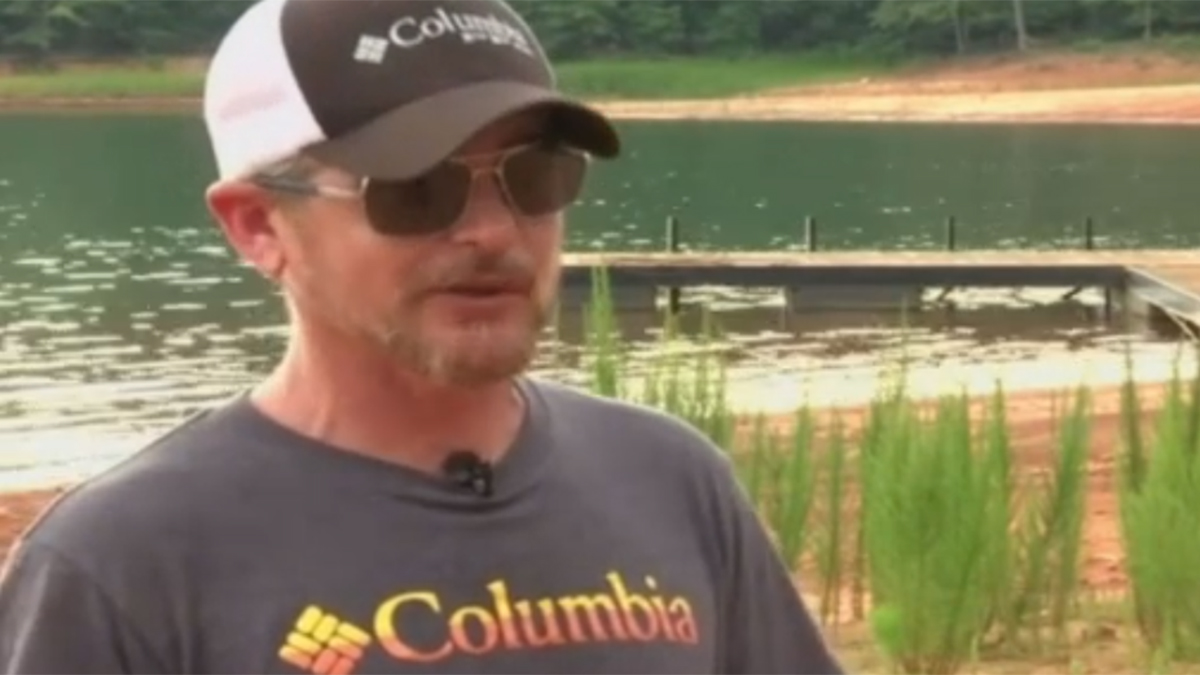 Ben Myers was keeping an eye on young Brodie. He showed him how to bait his brand-new fishing rod and cast it out into the lake. He didn’t expect the boy to actually catch anything, though. You can just imagine his astonishment when Brodie began to yell that he’d gotten a bite.

But his excitement quickly gave way to fear when he realized just what his nephew had reeled in. 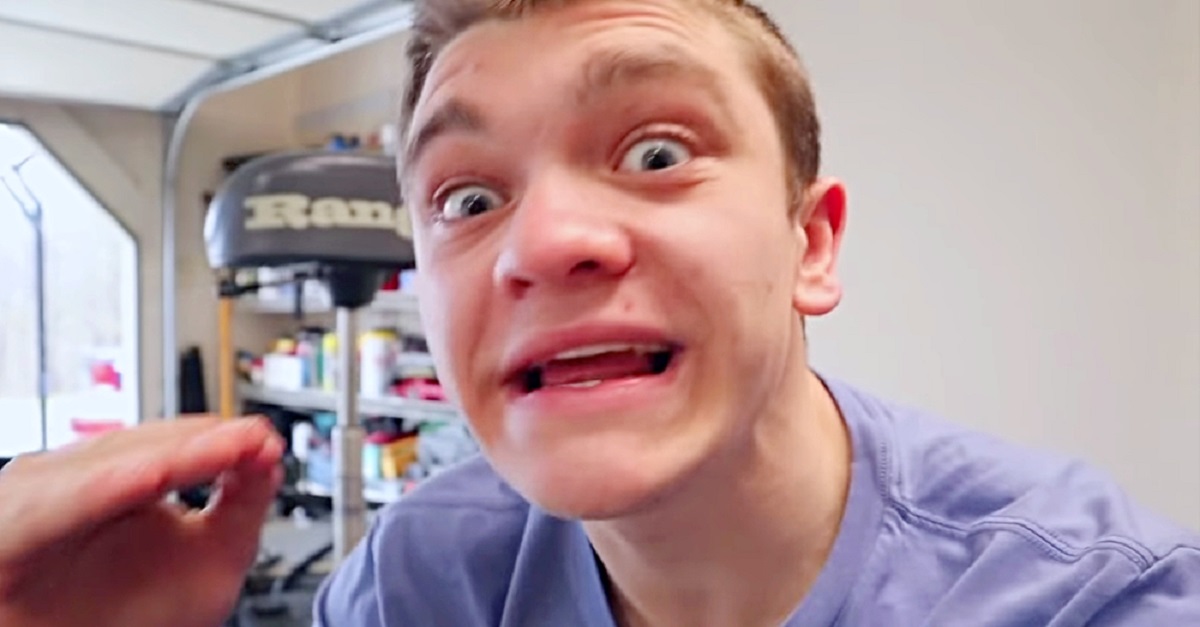 Brodie remembers that day well. “I felt like it was a big fish because it was bobbing my rod up and down,” he said. “I’d just gotten an Ugly Stik, so I was scared I was gonna break my rod. I was scared the line was going to snap.”

Once the heavy bag was pulled from the water, Brodie unzipped it. But when he saw what was inside, a shiver ran down his spine. He yelled for Ben. 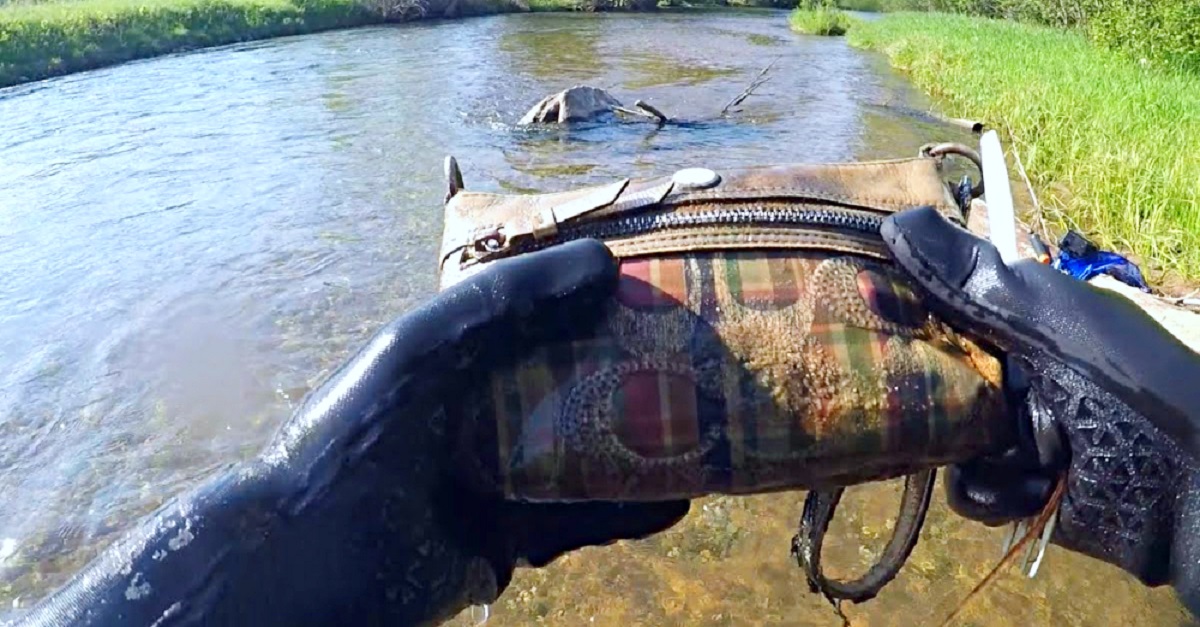 As he lifted the purse in his hands, he knew this item must have been old, but he never expected how old it was until one piece inside of it, in particular, gave the mystery away.

The purse was in remarkably good shape, although the brown leather was faded and muddy. They opened it up and there were some items inside, some unrecognizable, but one made Ben’s jaw hit the floor. 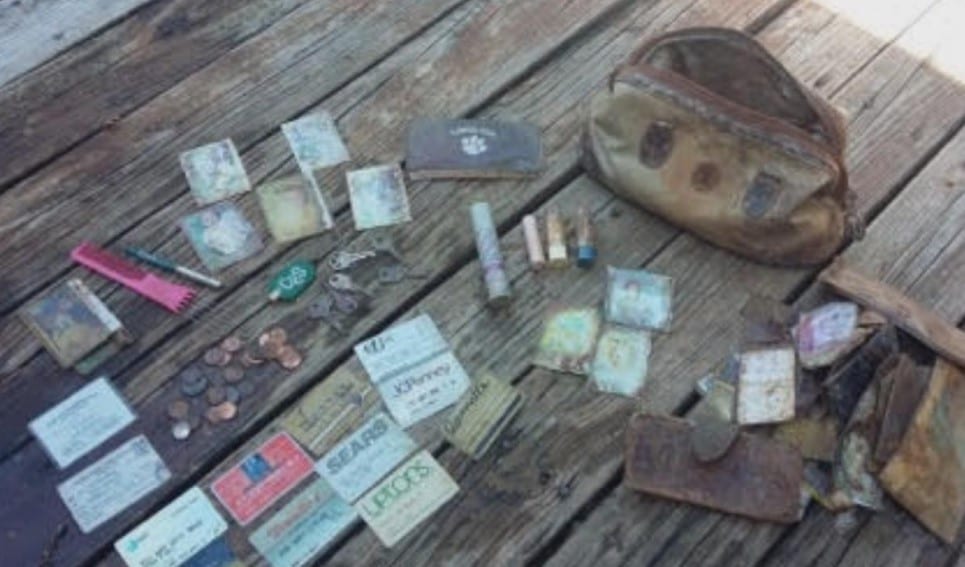 The men were surprised by the contents the waterlogged purse held. The first thing Ben and his fishermen friends pulled out were some old and faded photographs. Still, they had no idea whose they might be, so they kept searching.

“We might catch a can here, or something like that. But as far as a woman’s purse, that’s a first for me,” Ben said in an interview. “I’ve been fishing on this lake all my life, and that’s the first time I saw something be caught like this.” Thankfully, the items inside were in remarkable shape despite being submerged in 30 feet of water. Ben began rummaging around inside and pulled out two tubes of lipstick, a teasing comb, and some store cards.

But what had happened to the purse’s owner? And for how long had it lain on the murky bottom of the lake? 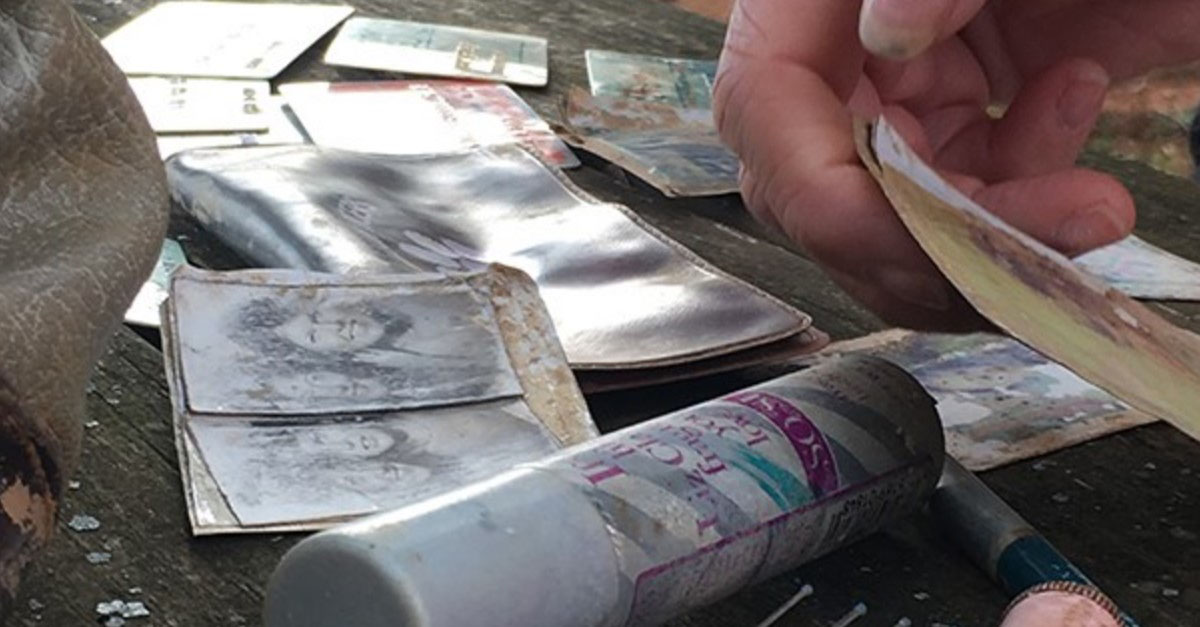 Among the contents, there were a lot of pictures of people that were taken a long time ago, but still, they seemed in great shape despite having been underwater for such a long time. But it was impossible to pinpoint whom the purse had belonged to.

Until they opened up one part of the purse where all the secrets were stored. 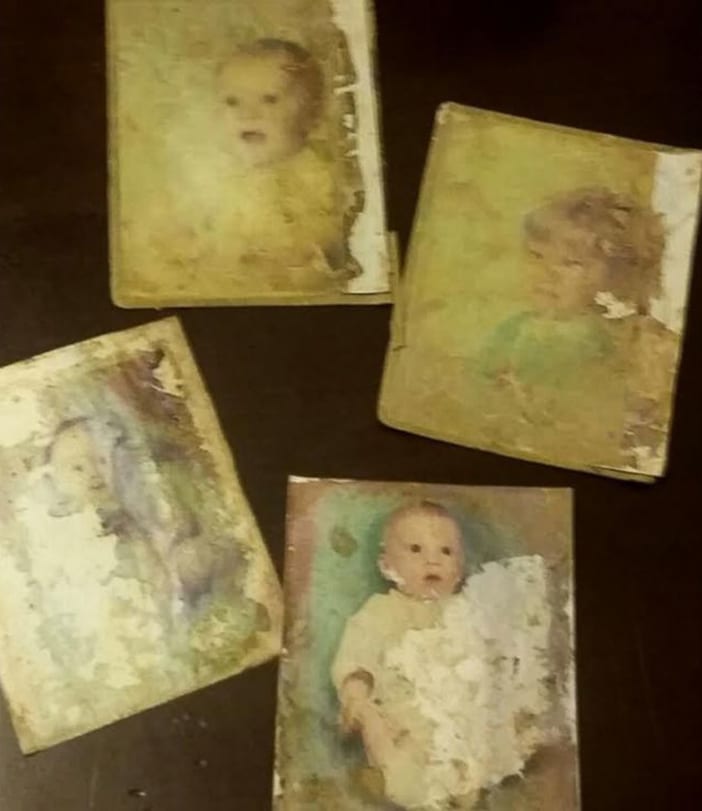 Inside another compartment were still more sodden photographs. Ben and Brodie carefully separated them and laid them out to dry. But after they had inspected all of them, one, in particular, caught their eye.

A familiar face stared back at them. That’s when they knew they had to call the police. 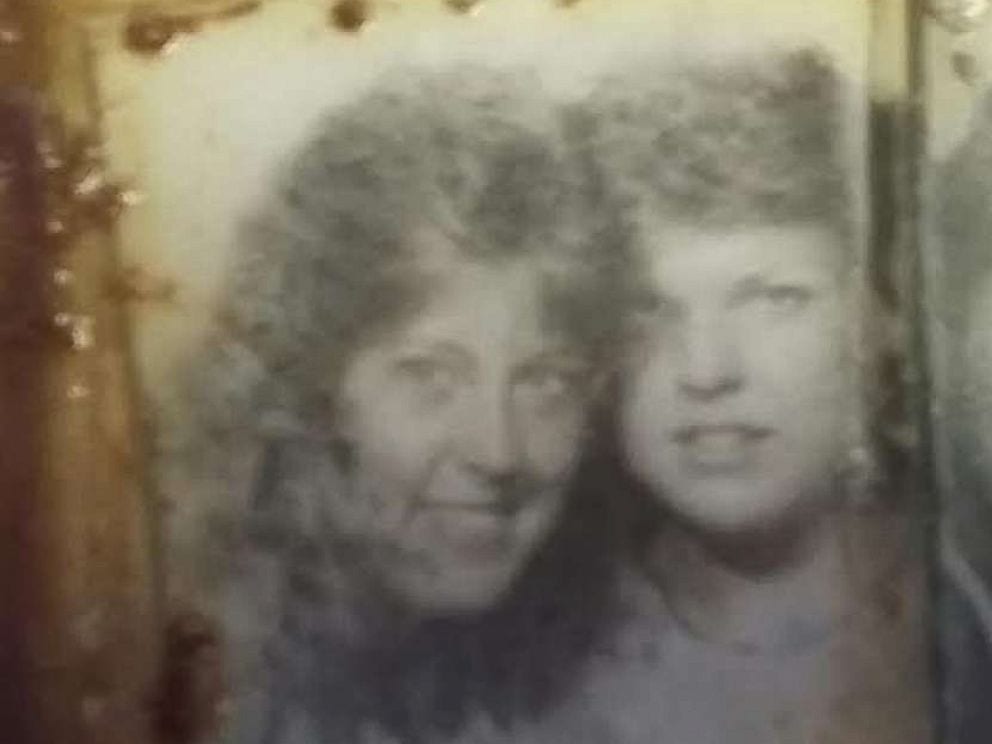 The woman’s face in the photograph was someone Ben recognized instantly. Brodie thought her face looked familiar, too.  “She was a friend of the family. I went to school with her nephew, but I haven’t seen her in ten years,” Ben told ABC News.

But why was her purse in the lake? And how long had it lain there for? Ben grew nervous as he realized that he may be tampering with evidence. After reporting their find to the authorities, Ben searched Facebook for the woman’s next of kin and found her nephew, who was astonished that the purse had been recovered after all these years.

He immediately got into contact with his aunt to tell her the news. 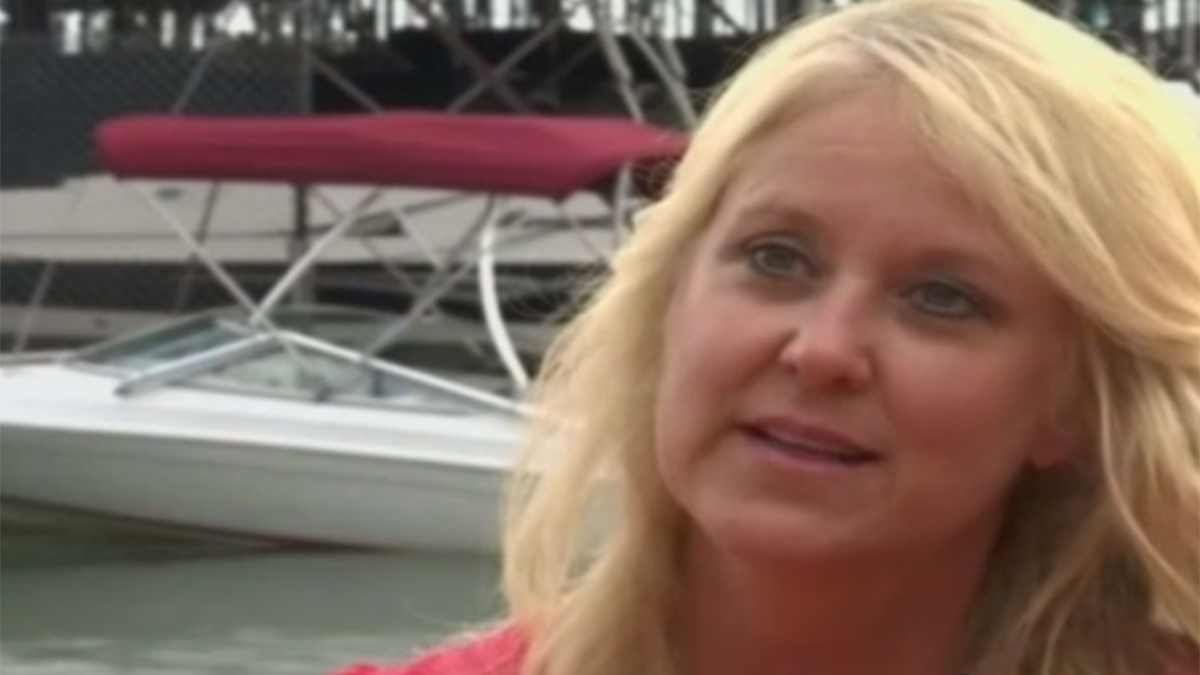 The purse’s owner was April Bolt, now 49 years old. She couldn’t believe that it had finally been found. “I couldn’t believe it. I was lost for words. You never think you’d see it again,” she said in an interview.

She had lost it back in 1992 – an unbelievable 25 years ago! But April believes that her purse disappeared under suspicious circumstances… 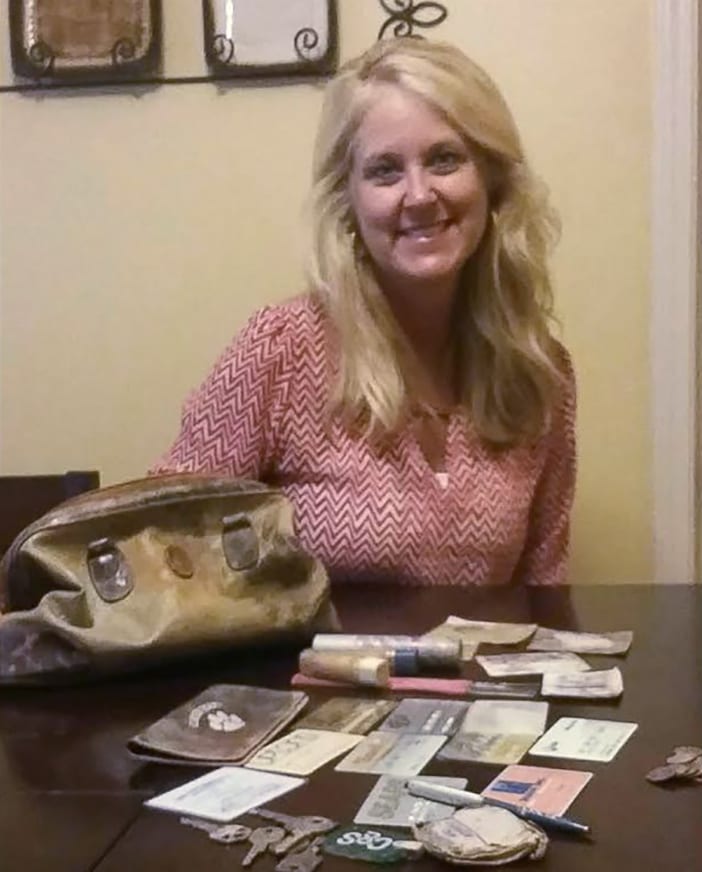 April had attended a cookout back in 1992 at Lake Hartwell.

“We were on the boat and my parents had a condo there and we were grilling burgers and we parked the boat in the slip… There were two guys there fishing and – I hate to accuse anybody – but when we got back I was like, ‘My pocketbook is gone!’” she explained. At the time, April had been devastated. “I was crying… It wasn’t a whole lot of cash – maybe like $60. But a woman fits her whole life in her purse. It was devastating,” she said.

“My favorite lipstick was in there and the color was discontinued.” But it wasn’t the lipstick or the cash that April was most upset about losing. Among the items that Ben had found inside the purse were baby photographs of her son.

“My son is 26 now, but he was 15 months then, and I had all his photos that were professionally taken in my wallet. They have water damage but you can make him out,” April said tearfully. When asked about their amazing catch that day on Lake Hartwell, Ben and Brodie still can’t quite believe it. “It was pretty wild,” Ben told ABC News. “You fish up a purse – for one – then you actually know whose it was…”

Brodie, on the other hand, hadn’t been as thrilled as his uncle to have caught an old purse instead of a fish. The boy’s disappointment was all over his face when they reeled in the leathery old purse. But it was Ben who had recognized the catch for what it was. “I told him, ‘You ain’t got no fish, you got a treasure!’” Ben recalls, laughing.

But what did April think about being reunited with her belongings that had been missing for over two decades? She simply said that the purse’s recovery “meant the world to her.” But she still has some unanswered questions.

Firstly, had her purse really been stolen all those years ago? And by whom?

Secondly, she wonders why it has been returned to her now. She believes that the universe must have its reasons.

“Everyone keeps telling me, ‘There’s got to be a meaning to why you’re finding this so many years later,’” she reveals. “I’m sure God will reveal that in time.”

Meanwhile, she is enjoying the memories that the items in her purse have brought back.
“It’s just so precious to have it back,” she concludes. 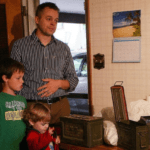