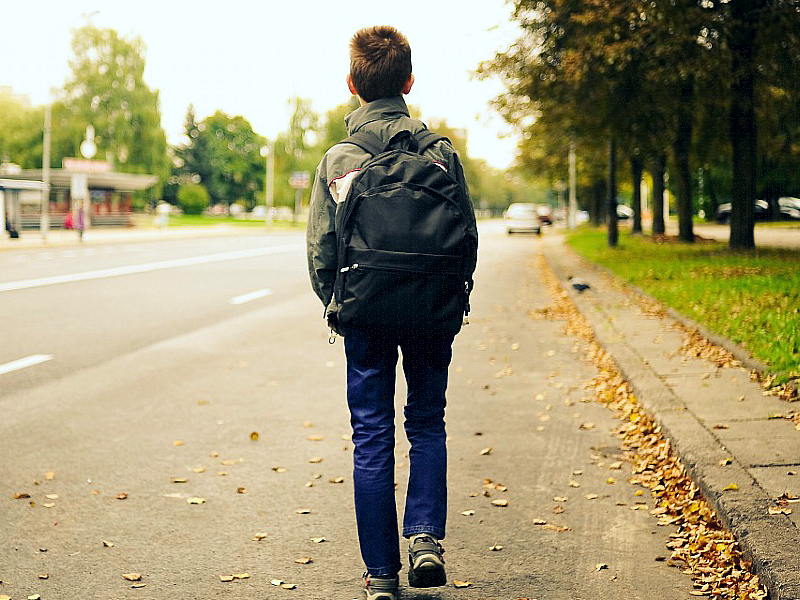 Going to the park should have been a fun and exciting time. But he felt that something wasn’t quite right.

Then the shouting began. He saw color and movement. When he finally realized what was going on, he just stood rooted in place.

What many considered harmless bags were the worst things Andrew could run into in a day. One whiff would bring up a hundred memories, and none of them were good. But this hatred wasn’t from a strange phobia. It was from something far worse.

The smell constantly flooded Andrew’s mind with harrowing memories from when he was a kid. A tiny hint of a garbage bag’s scent and Andrew’s day would be ruined.

He’d see the blue and red lights from when the woman in blue came to take him and his siblings away. Although he’d been young then, the world had forced him to understand what it meant to be a foster kid.

“No One Wants Me”

Andrew bounced from home to home, never feeling at ease or wanted. Every time he had to pack up and go to the next house, he’d only have a black trash bag to put his stuff into.

He felt like the world around him was calling him garbage. It only got worse when every one of his siblings got scooped up for adoption. Would no one ever need him in their lives?

When Andrew stepped foot into Dominique and Kevin Gill’s home, he didn’t expect anything different. Andrew would only stay with the Gills for a few months until the system found him a family that wanted him.

Although the terms of Andrew’s stay were heartbreaking after everything he’d been through, he was thankful that at least he didn’t have to put his hopes up. This mindset would land him in trouble a month later.

It was a dark evening when trouble brewed in the Gill house. Andrew had been alone, skulking in his room, when Mrs. Gill came by to call him for dinner.

Andrew didn’t respond when she talked to him. He’d been in a bad mood since he came a few days before and saw no reason to try to bond with the family. But when Mrs. Gill came close to him, Andrew did the unthinkable.

Andrew screamed at Mrs. Gill, telling her to leave him alone. He remembered the other times he’d opened up to families across the state.

He’d thought himself safe from using trash bags when they’d declared that he would be moving out of their house a week later. His eyes smarted with tears, and his heart pounded. Why could no one ever love him?

Andrew had always believed that being a good kid always paid off. He did everything that he thought parents everywhere loved so that he could stay with a family that finally noticed him.

He loved reading and loved to think of himself as a smart boy. He ate his greens, never used profanity, and always went to bed on time. But he’d never gotten a family that wanted him to stay.

“This is only temporary, Mrs. Gill,” Andrew said mid sob. He wiped away his tears and sat down, realizing he’d shot to his feet while lost in his tantrum.

His lips still quaked, and emotion rocked him. But he held his tongue from saying anything else. Mrs. Gill stepped into his room, her brows drawn and eyes glossy. What she’d say would shock Andrew.

“I know how you must feel,” Mrs. Gill said. “I was once in your position. But it gets better, I promise you.” She neared and wiped Andrew’s eyes with her sweater.

“It’s okay if you want to eat in your room. Do you mind if I bring my food here and we can eat together?” she asked, and Andrew’s mouth fell open.

A Turn Of Events

Andrew sat dumbfounded. He’d expected Mrs. Gill to lash out at him. How many of the other foster parents had done just that?

In his mind, the quicker he riled this family, the quicker they’d be done with him. Wasn’t all this temporary? Mrs. Gill sat with Andrew in his room, and they ate dinner. But it didn’t stop there.

The Love Of A Family

Mr. Gill and their son, Joc, also joined in. If Andrew’s mouth fell open earlier, now he’d have to pick it from the floor. He sat quietly as the family talked and laughed.

Without knowing it, Andrew found himself laughing at the family’s jokes. He realized how perfect they were and loved the energy they exuded. But sitting here with them reminded him of something.

The hardest part of sharing such a wonderful evening with the Gills was realizing that he’d never stay with them. Andrew hated the fact that he really liked them.

Everything about the Gills was great. He loved what Mr. and Mrs. Gill did careerwise and how they showed him and Joc affection. Why would the universe let Andrew experience all this if it would snatch it away in a few months?

Andrew was stuck between loving the Gills and dreading staying with them when the clock on his departure was counting. It was a month since his meltdown with Mrs. Gill, and he didn’t know what to do.

Andrew had had a few other meltdowns in front of the Gills. Although he couldn’t bring himself to tell them why he broke down as much, he just wished the family would keep him.

Andrew’s cheeks grew red as he recalled his last meltdown. He couldn’t understand why the Gills were being so nice to him.

He’d had a tantrum just the day before, something he’d never really learned to control. But the Gills were still good to him. Andrew hadn’t fully bonded with them until he noticed what their son was doing.

“You like Minecraft?” Andrew asked Joc, moved by what the boy was playing on his computer. Joc perked up with interest. “Yeah.”

They sat together in front of the computer and played together. They built a house, dug up the ground, searched for gems, and ran away from Creepers. Andrew felt his walls starting to tear down.

After a few months, Andrew finally started to feel comfortable with his new family. But that didn’t mean life was great all of a sudden.

Living with the Gills was still temporary. Andrew knew that if they suddenly didn’t want him anymore, he’d have to get out the trash bag again. He cried while he tried to sleep.

The Morning That Changed Everything

Andrew woke up one weekend morning wondering what he’d do. Then a woman from social services rang the doorbell. The sight of the woman shriveled his insides.

Andrew already knew how these visits went. “There’s someone here to meet you,” the lady said while holding out her hand. Andrew quirked a brow at her statement, wondering what the woman meant.

A Trip To The Park

The first thought that came to Andrew’s mind was his real family. Were they looking for him? Then he thought about his time with the Gills and how much he loved and was thankful they’d taken him in.

The lady proposed walking to the park, to which Andrew reluctantly agreed. As they strolled on the cobblestone paths amid tall leafy trees, Andrew noticed something about the lady.

A hint of a smile dangled across the lady’s face. Andrew could tell she was trying her best to hide it. He swallowed a lump of air and continued walking.

As the park came into view, Andrew saw a man seated on a bench. Mr. Gill? He looked closely, realizing it was indeed his adoptive dad. The man beamed at him, waving as Andrew neared. What was happening?

Giggles came from the trees around Andrew’s path. He looked around, wondering what was going on. Mr. Gill came to his feet, and almost immediately, a large group of people jumped out from behind the buildings and trees.

Andrew took steps back, unsure how to process whatever was happening around him. His young eyes took in everybody, noticing what they each carried.

Andrew burst into tears as he finally internalized what was happening. The people before him all held signs. Andrew could see Mrs. Gill and Joc.

Each sign had a different word attached to it, and when held in a straight line, they all read, “Will you be a part of our family?” Andrew’s lips quivered, and his little fingers shook. He looked up at the lady who’d brought him down here, and what she said made his tears double.

“You’re home, Andrew,” the woman said before going down to her knees. She gently wiped the tears off of Andrew’s eyes. “Go to them, and be happy. Can you do that for me?”

“I can,” Andrew whispered. He still couldn’t believe that the Gills wanted him to stay forever. When he nodded to the woman, she said, “Go get them, tiger.”

Andrew ran into Joc and Mrs. Gill’s arms. His tears flowed freely, but this time they were tears of joy. Everybody came in to hug them, and the love they all radiated made him smile as his heart thumped within his chest.

He’d been in and out of several homes, constantly feeling unwanted. He felt the warm hug around him tighten and knew he was where he was always meant to be.

The Gills had wanted to adopt Andrew after he came under their roof, but the process had taken longer than expected. Although they started as a temporary family for him, they slowly fell in love with the person he was.

They’d also seen how much he broke down, understanding the torment of being left at every turn and such a young age. Would he accept them as his family, or did he want to find another?

“Our mindset was we’d help him until he found his forever home,” Mrs. Gill said to the local news that had been there to capture the moment.

For Andrew, finding a family that would not give him up was everything he could ever ask for. But with the Gills, he was experiencing more. He’d found the best mom in Mrs. Gill, who always listened to him.

Mr. Gill taught and played sports with him. He was always there to talk about his interests and give him advice. But there was more.

Joc was the best brother Andrew had ever known. His relationship with Andrew transcended well past video games and comic books.

Andrew found out they both loved science and enjoyed watching space documentaries. They’d spend Saturday mornings watching cartoons and the afternoons riding around the neighborhood.

And End With A Beautiful Beginning

So when the lady from social services appeared, Andrew couldn’t bear to think that everything he’d had over the last few months would seize existing.

He’d thought he’d be okay with the period coming to an end, had convinced himself it was a certainty he’d have to prepare for. But when the lady showed up that morning, his life seemingly halted.

Andrew felt like his heart was going to explode. He thought that having Joc as a friend for a few months was already the best he could hope for.

He had cherished every pancake Dominique had made and every bike ride with Joc– knowing everything would eventually crumble. But seeing the adoption papers in their hands changed all that. He knew he had found his real family.