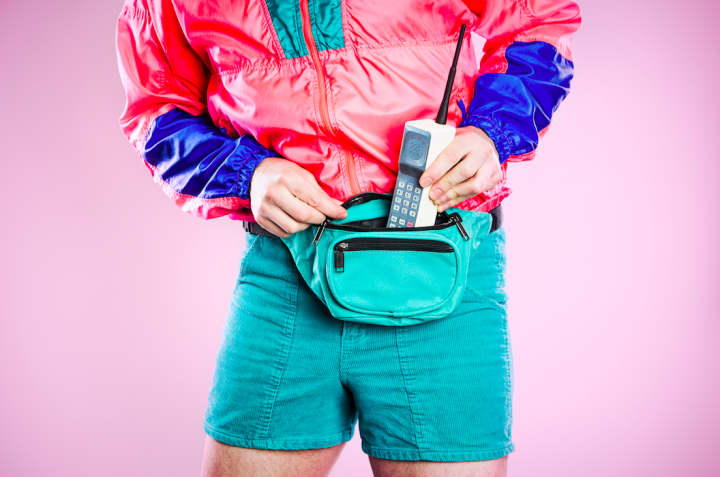 Certain decades were just cooler than others. The 1920s rocked; the 30s … not so much. The 50s were a bit of a red scare, the 60s were all about rock n’ roll and free love – and the Cold War still, too. Often the easiest way to pinpoint a “cool” decade is to take a look at the sartorial trends popular with the young folk. For example, those roaring twenties had the liberated flapper girls in slinky dresses and hip hats. The 50s saw more short-sleeved button-down shirts tucked into starched blue jeans. Not as hip. But not as bad as in the 1980s, when things just went off the rails entirely.

Have a look at some of the worst fashion fads of the 1980s.

A common trend of the ’80s is that people loved to wear sweatbands and headbands.

It went straight across their forehead. Most of the time, the people that were wearing the sweatbands weren’t even working out.

If you were a teenager in the ’80s, then you probably had 3-5 pairs of acid washed jeans in your closet. It’s a trend from the ’80s that came back into fashion recently.

A few people are happy, while others are cringing.

Buying a denim jacket and then ironing patches onto it was a common practice. Patches of everyone’s favorite bands, sayings, brands, etc were readily available in stores.

If you had a denim jacket without patches, you were considered weird.

Even though fanny packs are coming back into the fashion scene, it still remains as one of the worst trends of the ’80s.

It doesn’t make sense to have a purse hanging off your waist!

12.) Suits With Pastel Shirts and Ties

When Miami Vice was on the air, it inspired an entire generation of women to start wearing pastel shirts and ties.

It’s embarrassing, but the actors in Miami Vice looked cool!

Bright colors are great, but always glowing in the dark is not ideal.

If you are going to wear neon, you might wear it from head to toe!

Since you are wearing neon, you might as well wear big plastic earrings to match, right?

The earrings appeared on most TV and movies in the ’80s and it seems to be one of the worst decisions!

Stirrups were a trend that looked ridiculous on everyone. We would not classify it as stylish.

There were a lot of guys that wore questionable trends in the ’80s, including geometric patterned shirts.

Crazy patterns and bright colors were considered stylish, even though we shake our heads now!

Tie a bright sweater around your shoulders, and then have a feathered haircut.

Apparently, everyone in the 1980s had cold ankles and wrists. That is the only logical explanation this fashion fad, because why the hell else would people have been prancing around in public and on television screens wearing colorful leg warmers and huge fluffy wristbands all the time? Not because it was such a strange, backward decade clothing-wise that people actually thought leg warmers were somehow edgy and cool, right? Right!? Their ankles were all cold, that’s all. Perhaps it was because of the teeny miniskirts that were always worn. Or because they were desperate to look like a dancer.

When clothing stores began to sell different colored leg warmers, girls began to wear them with every outfit. Well, whatever the reasoning, you could be sure that at least one or two pairs of leg warmers could be found in every teenage girl’s wardrobe.

Parachute pants are great to have on if you happen to fall out of a plane, but they are not so great to wear down on land. Why? Because they look so very, very stupid. They were referred to as “parachute pants” due to the level of extreme bagginess of the pants. As they were MC Hammer’s signature look, the unique style was referred to as “Hammer pants”. They were typical worn by men and usually brightly colored and patterned.

Not even MC Hammer could make the effrontery of these billowy breeches cool and he was freakin’ MC Hammer! For some reason, in the 1980s the mere fact of clothing being different – being extremely different – was enough to make it seem cool. The trends came and went quickly, at least, because like we said, if MC Hammer can’t make something universally awesome, it just ain’t that awesome.

Having a whole bunch of dangly crap hanging off you was just the pinnacle of cool in the 80s. Gold chains were part of the fashion fads of the 80s, thanks to celebrities like Madonna, Mr. T, Slick Rick, Big Daddy Kane and Run DMC. It seemed like no one who was in the public eye could be as such without a whole bunch of crap just, dangling!

The thick rope gold chains were ostentatious and seen as a statement of luxury and power, with gold chains still playing a huge part in hip-hop style today.

Clocks hanging from chains were made popular by Flavor Flav when he appeared on TV and in concert. To this day, the rapper still wears a clock and it’s like a trademark of his!

People loved big accessories in the 1980s, one of them being earrings. People did not want to have one hoop, they had to have 2-4 hoops in a row!

Obviously, the color had to be neon so it went with the outfit.

Who the hell fell asleep at the switch and let people start to think that having huge shoulder pads was anywhere near a good fashion move? Women would wear power suits with big shoulder pads in an attempt to prove that they were just as capable and powerful as men. Shoulder-padded power suits were the embodiment of the “dress for success” mantra and during that decade, dressing like a man meant dressing for success.

If you enjoyed taking a walk down memory lane, you’ll love looking at the worst hairstyles of the ’80s! Click the next button to see more!