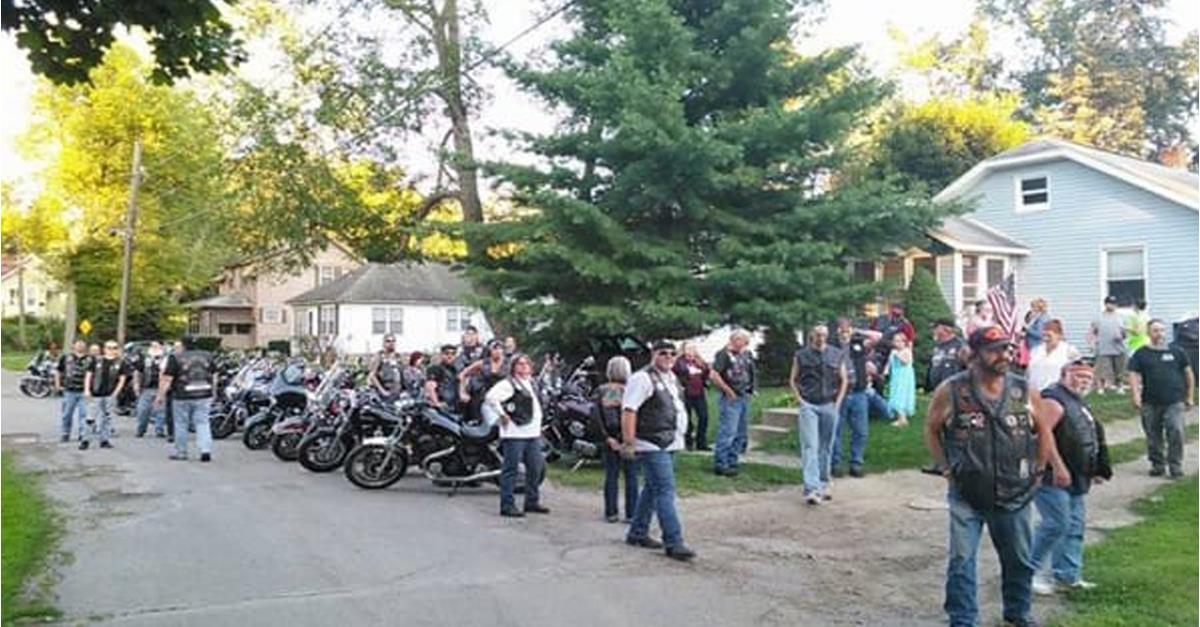 She knew that was it, she wouldn’t be able to go to the prom anymore. Even though it had been something she was excited about, she knew there was no other way.

Just as it set in, she noticed something very out of the ordinary. There were bikers, more than a hundred, at her doorstep. But what did they want?

She Had Been Excited

For the last quarter of the course, one of the only things on Shannon’s mind had been attending that party. She couldn’t wait to make her appearance in that new dress that she liked so much.

But she had also been having some doubts about it. Her last few years in high school had been full of trouble, and she couldn’t just let go of it.

The Story Of Shannon

Shannon was born in Gosport, Hampshire in England. She was raised by her mother ever since her father Officer Daniel Purcifer, sadly passed away in the line of duty. Now that she was 16, things got more complicated.

Her father’s passing really took a toll on her and Alex and Brandon – her two brothers. But most of all, it was hard on her mother Claire, who was just a retail worker.

Claire took her time to grieve and after a long time, she decided to get back on the horse and start dating. She knew that he had to be a guy that could be a good stepdad for her children and especially Shannon.

After months of blind dates, Claire finally found the right guy. His name was Kevin Carstens. He had a good job as an engineer and was extremely kind. And he was good with her kids too. But there was more to him than met the eye.

Kevin’s favorite hobby in his free time was riding motorcycles. Even more so than that, he was a biker in a local biker club. They had a lot of loyal members.

Claire was a little hesitant of him at first because of this fact. Biker gangs sounded scary and dangerous. But Keven told her there was nothing to be afraid of. His club was very relaxed and just enjoyed riding motorcycles. Claire decided to trust him.

Kevin soon became a part of the family and did right by his new family for years. He became a reliable caretaker for Shannon and the two boys. And he was the perfect boyfriend for Claire.

But things wouldn’t always be so easy. Shannon started having a rough patch in high school. She had some problems with a group of students at her school that wasn’t easy.

Shannon started to develop some problems with her health. She’s celiac, had ulcerative colitis, and even arthritis. Things weren’t easy, to say the least.

But the thing that bothered her the most were things that were out of her control. The problems that her school peers caused her. They started bullying her over her medical problems. It was at a point where Shannon didn’t want to partake in school events anymore.

Prom was something that Shannon had been excited about for her entire school year. She had even gotten a dress in preparation and worn it in front of the mirror every so often. She thought she looked gorgeous.

But it would all be ruined by her peers who didn’t have the same sensitivities as her. She hated being ridiculed for no reason. This meant she didn’t look forward to going to school.

Shannon still wanted to go to prom so she decided that she would make her own so she wouldn’t be ridiculed. She invited her family, her friends, and her brother’s friends.

This made Shannon actually happy again. She looked forward to this one even more than the original prom. But something was going to happen on the day that she could never have expected.

Most of the guests had already arrived. They were all in the living room talking and having some drinks when suddenly someone knocked on the door.

Shannon immediately went to see who it was. And when she looked out the window to see who was outside, she was absolutely baffled: there was an army of bikers waiting in her garden.

Why Were They There?

They all had brought their motorcycles, which were parked all next to each other in a swarm by one side of the road. And the bikers were looking the part: leather jackets, chaps, the whole nine yards.

At first, she wondered what those people could be doing in her garden. But in a minute, she realized; she knew the answer to that question.

They were all his stepdad’s friends! Kevin had told all his mates in the biker club about the alternative prom party that Shannon was throwing at the house.

And there they were, all of them. They congratulated Shannon on her graduation, brought some presents, and let her ride their bikes. This is how Shannon recounted the event later:

“The best part was when the bikes arrived. I had no idea I was going to be riding there on a three-wheeled bike.” She had great fun. It was way better than what going to the original prom would have been.

The party was recorded on video and shared on social media. And soon enough, it went viral. Shannon was getting comments congratulating her from millions of people, and she and her family were being interviewed by the press.

“There’s no better way to stick two fingers up at bullies than to go out and enjoy yourself,” Claire told the media, summarizing the point of the whole party.

The principal of Shannon’s high school, who may have been guilty of not preventing the bullying of which she was a victim, was also asked about his thoughts on the rival promotion party. And this is what he said:

“The alternative prom is a lovely idea. It is a great example of the positive power of social media, and we hope it is a great success.”

Do you think it is kind of hypocritical of the principal to come up with these words after all the bullying that Shannon had to go through in his school?