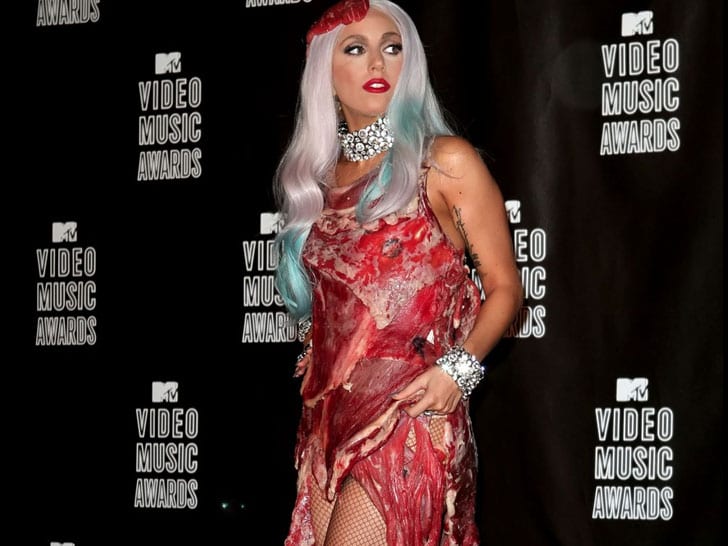 Ah, the fashion police. It’s always fun to watch a red carpet and then gossip about who looked amazing… and who looked like an escaped psych ward patient because of their outfit. Of course, stars are people too (for the most part) and it’s not nice to make fun of people’s clothes but, come on now. It’s our duty as normal, everyday citizens to ridicule them from time to time. It makes us feel better about the fact that we’re not vacationing on Lake Como with Clooney or yachting with Beyonce. So, besides Lady Gaga and her Kermit cape or meat dress (she’s doing it as art, not fashion, so it doesn’t count) who are some of the worst celebrity fashion fails in recent years?

Here are the biggest fashion fails of all time

Kim Kardashian’s floral print dress was all anyone could talk about after the Met Gala in 2013. She wore the dress created by Givenchy designer, Riccardo Tisci, when she was pregnant with her daughter, North. The unflattering design was criticized as looking like a set of curtains. Some people even compared the look to Robin Williams character, Mrs Doubtfire.  What made the outfit more bizarre, were the matching gloves and heels teamed with the gown.

However, Riccardo Tisco defended Kim K and said, “People can say what they want. To me, pregnancy is the most beautiful thing in the world, and when you celebrate something, you give people flowers. I think she looked amazing. She was the most beautiful pregnant woman I dressed in my career”.

Helen Bonham Carter has a reputation as being a little kooky which can definitely be seen in her choice of outfits for the red carpet. At the 2011 Golden Globes, she wore a Vivienne Westwood dress with multiple layers and colors and rocked a birds nest inspired hairstyle.

However, the most bizarre feature of her red carpet look was the mismatched shoes. However, Helena Bonham Carter has defended her unusual style by saying, “I like to have fun, and I love dressing up; it’s part of my acting”.

There cannot be a list of celebrity fashion fails without mentioning the infamous swan dress worn by Bjork. The dress was widely criticized. Famously, Joan Rivers remarked, “This girl should be put into an asylum” and Steven Cojocaru claimed that the dress was “probably on the dumbest things I’ve ever seen”.

Bjork’s dress was parodied many times and appeared in the comedy film “White Chicks” and “My Big Fat Independent Movie”. However, the once-ridiculed swan dress is now being featured in the Museum of Modern Art.

It was actually quite scary when Cher arrived at the 1986 Oscars in this Mohawk costume designed by Bob Mackie. The outfit featured an elaborate cape and cage style bracelet which was quite daring.

However, the 2-foot plumed headdress was the most bizarre feature of all. We can’t imagine that the audience behind her were a big fan of her costume.

In 2001, Britney Spears and Justin Timberlake arrived at the American Music Awards in matching denim ensembles. Not only did they have the courage to wear matching outfits on the red carpet, but they also wore denim as formalwear.

Who can forget the backward white tuxedo thing that crooner Celine Dion wore to the 1999 Oscars? Maybe it was Dior but come on people – the thing was hideous for any decade and any designer. It was shiny, white, and just all wrong. She even had a weird futuristic white fedora on her head to make the whole thing more hideous.

What was she thinking? Last year, however, Celine Dion says she sticks by her decision and the problem was that the outfit was ahead of its time rather than one of celebrity fashion fails.

Now Ozzy’s daughter is a certifiable fashion expert, if you count being a red carpet commentator and co-host of Fashion Police being an expert. She’s got lavender colored hair but for the most part, she looks pretty decent these days. Although, her outfit here just doesn’t work..

Her hair was in a 1950s bouffant flip with a big bow and she looked… pretty ridiculous. Seems like she’s matured out of these silly outfits, so the days of big bows and John Waters outfits might be behind her, hopefully.

Madonna isn’t afraid to take chances with fashion obviously, and she’s inspired some of the biggest fashion trends of the last few decades. Tutus, ankle boots, fishnets, neon. Still, she’s not twenty-five anymore and sometimes Madge will go off the deep end and show up in an outfit that would make other mothers her age scream in terror.

For instance, take her “Oscar the Grouch” outfit that she wore to a Gucci event a while back — it seriously looked like Oscar and Peter Pan collided in the air, threw up on each other, and transformed into a mini dress. Add a gold belt, fishnet hose and some black and green lace-up shoes and, Ta-Da! Epic fail.

She’s usually running around in slut-tastic outfits and dancing on countertops and bars in Vegas and Ibiza, so it’s not hard to place Paris on a worst-dressed list. Unless of course you like mesh and hooker heels. At a 2003 red carpet event she wore a “dress” that would probably make a Playboy playmate embarrassed.

The top was like a black bikini, the torso was see-through black mesh, and the teeny skirt (honestly it was more like a strip of fabric than a skirt, was Pepto-Bismol pink. She carried what looked like a big Pepto-pink trench coat with her too – a great match with her barely-there bikini dress ensemble. Classy.

Ok, usually she looks pretty decent, which isn’t saying much since most of the time Thurman is wearing bikinis and lounging on yachts in France or the Caribbean, but her dress at the 2004 Academy Awards was not at all a winner. It was frilly white and blue lace and she kind of resembled a Victoria Secret model in a pirate costume – not cute.

It was kind of hippie meets couture and it was also kind of hideous. Her face looked gorgeous and she got to show off her long legs, but let’s hope she shelves this one far, far back in her closet.

During the 74th Academy Awards, there were a lot of critics that claimed that Halle Berry was the best-dressed actress on the red carpet. We don’t think so.

This floral sheer top part with mermaid skirt was a fail because it did not flatter the actress. After she wore this dress, many other actresses started copying this same look.

She wore a pink jumpsuit with random cut outsides and the pants were wide-leg.

Usually Rihanna is stylish and always makes the best-dressed list. Well during the 2015, her all together look was a fail.

She looks like a pink marshmallow in this and it doesn’t look good.

Diane Keaton is known for her odd sense of style.

During the 2004 Oscars, she got a few strange looks. She is dressed up like a penguin with a top hat.

At the 2010 Oscars, Charlize Theron’s outfit did not mix well.

She wore a Dior dress with the awkward placements of the roses around her chest. It’s definitely a no.

With this outfit, it looks like she is wearing a lampshade.

Maybe next time, she needs to rethink her choices.

This strange outfit looks weird to put together.

The ribbon ties up all the weirdness.

This Oscar mistake will leave you shaking your head.

It looks like she is weird an oversized bow that covers her chest, and then the bottom part looks like a tablecloth. Next!

Yeah, the ’80s were an odd time in fashion, but this was a terrible decision.

From the bicycle shorts to the peekaboo bra, the features of the dress need to go.

Yes, floral colors are definitely in style, but the singer did not do a good job at putting this outfit together.

It’s definitely not Oscar-worthy either.

We never said that Whoopi Goldberg was a trendsetter, but this dress was a mistake.

It’s a fashion fail that needs to be erased ASAP.

The country singer thought it was a good idea to wear a rainbow gown to sing Somewhere Over the Rainbow at the 2002 Academy Awards.

The pastel gown is a bit much, and there are too many colors going on.

What are her shoulders supposed to be?

It looks like a lampshade from the Old West.

It looks like he is an 80’s wedding singer trying to be hip and cool.

He has that hipster beard and long hair to make the look worse.

The grin on his face makes us think he is proud of this fashion fail.

Is she the next Little Bo Peep?

She must have lost her sheep along the way.

Yes, fancy clothes can be uncomfortable.

But why would you wear a fancy purple nightgown to the Oscars?

Not to be rude, but it looks like she is going to the ballet, but not as a viewer.

But she is the star of the show.

The dress looks bad on her because it’s shapeless.

The ’90s was a weird time for fashion.

This dress looks like a satin bodysuit with matching bed sheet tied around the waist.

When you quickly look at him, he looks like the Undertaker.

Did he want to look scary?

The color palette is awful and the fit does not look good on her.

Doesn’t it look like her dress is tucked into her underwear?