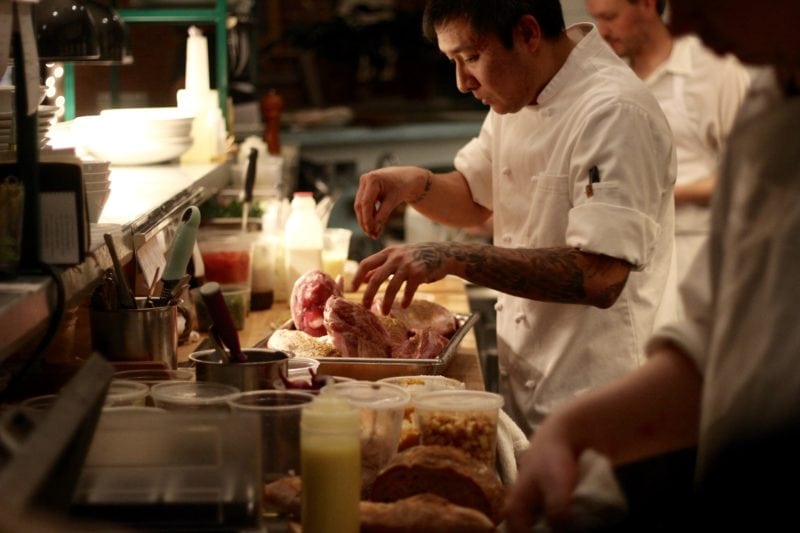 While it’s no surprise that the top 3 spots went to European restaurants you’ll also find Bangkok, Lima, and Mexico City on the coveted list. Choosing the best restaurant in the world to feast is entering into territory where food and art intermix. The platesare visual masterpieces and the taste of the food is often even better.

In honor of Anthony Bordain, let’s take a culinary trip around the world.

Massimo takes the local produce from the surrounding region and turns it into playful, colorful dishes. Dining at the best restaurant in the world is an emotional experience. Massimo’s passion for food leads you through a narrative of the Italian landscape that’s truly moving.

Named the best restaurant in the world twice, El Celler de Can Roca was bumped down to second place this year. This amazing restaurant is found in Girona, Spain and is run by the 3 Roca brothers: Joan, the chef, Josep, the sommelier, and Jordi, the pastry chef. When you sit down at your table you’ll see three rocks sitting in the center, one representing each brother.

The dishes are inspired by the boy’s childhood memories and show off the regions local flavors. Innovative cooking techniques and unique platting presentations are used to stimulate your mind as much as your senses. This restaurant is also famous for its wine pairings that blend perfectly with each dish.

The first thing you’ll be awed by at Mirazur is the breathtaking panoramic view of the Mediterranean sea. An hour outside of Nice, France in the small town of Menton, chef Marco Calegreco creates progressive European plates. Add this restaurant to your bucket list.

Mirazur grows and uses its own produce from the backyard farm. Talk about fresh produce! You’ll also find lots of local seafood on the menu. After dinner take a stroll to the Italian border, it’s less than a five-minute walk away.

Run by Swiss born chef Humm, Eleven Madison Park, was the top restaurant in the world to dine at in 2017. Humm started working in restaurant kitchens at the age of 14 and won his first Michelin star when he was only 24. He’s a true culinary talent.

His amazing restaurant serves innovative New American cuisine inside an old remodeled bank in New York City! The plates are beautiful but known to have a minimalist style to both the decorating and cooking techniques. If you want to try Humm’s food at a much cheaper price check out his casual dining market, Made Nice on west 28th street.

This buzz worthy restaurant has been making waves in the culinary world for its creative plating techniques and unusual location for years. You can find Gaggan on the streets in Bangkok, Thailand serving a mix of modern Indian food and innovative global cuisine. It’s been named the best restaurant in Asia for the last four years.

If you’re dying to try this restaurant hurry up and book your trip! Chef Annad has decided to close this beloved restaurant in 2020 and open up a small restaurant in Fukoaka, Japan instead. If you want to try some of Annad’s culinary delights for a fraction of the price try one of the cheaper restaurants he’s invested in like, Meatlicious, Mihara Tofuten, or Gaa.

Standout Dish: Lick it up

You’ll find the best restaurant in South America in Lima, Peru. Central is run by a husband and wife team who created a culinary shrine to Peruvian culture. You can’t find a lot of the ingredients on the menu anywhere else in the world.

Ever wanted to eat a sharp-tooth-filled piranha head? You can at Central! The menu features 17 courses that take you from the ocean floors to the mountains through local ingredients. Central also uses traditional Peruvian produce like potatoes and corn throughout the meal.

If you’re ever craving 5 star Japanese food while in Lima, Peru head to Maido. You’ll find fresh fish dishes with award winning, citrus packed sauces. The flavors at Maido are so good this restaurant beat out Central for the title of best restaurant in Latin America in 2017.

Chef Tsumura was born to Japanese parents in Lima, Peru and studied Culinary Arts in the U.S before returning to Latin America to open his first restaurant. He’s made Japanese-Peruvian fusion a new wave of cuisine. A very delicious one.

Chef Alain Passard is one of the most famous chefs in the world and as a result he’s doing beautiful things with vegetables at Arpege. You’ll only find meat offered on the menu in small quantities. It’s the vegetables that are taking center stage.

Passard brings the produce for his dishes fresh from his own garden every day and whips them up into a vegetarians culinary dream. Everything is seasonal. You’ll find delicate white asparagus served only in the spring and black truffles on the menu in the winter. If you’re hoping to book a reservation at this famous restaurant it’ll take a few months to a year to get in because the food really is worth waiting for.

Head to Spain to indulge in an artistic 20 course meal. Mastermind chef Andoni is one of the most pioneering chefs in the world. He’s always coming up with new cooking and plating techniques. Because of this the sous chefs refer to the kitchen at Mugaritz as the research lab.

The element of surprise is part of the dining experience at this famous restaurant in Spain. You might find a mystery bottle of wine on your table and you most definitely won’t be able to guess what’s inside each dish.

If you’re a fan of grilled food then make your way to Axpe, Spain and dine at Asador Etxebarri. Chef Arguinzoniz’s restaurant is known as the minimalist grill cookery because he uses simple ingredients and grills them to utter perfection.

Chef Arguinzoniz is the only self-taught chef to run one of the top restaurants in the world. He was born and raised in Axpe, Spain and has only ever worked in his own kitchen where he designed his very own grills with adjustable heat. You’ll taste a delicious smoky flavor in all of his dishes, even the ice cream!

If you’re looking for some of the best contemporary Mexican food in the world then you need to try Quintonil in Mexico City. Named after a green Mexican herb found throughout the dishes, this restaurant is fresh and authentic.

Chef Vallejo tries to keep his carbon footprint so low that most of the ingredients only travel 30 meters from garden to plate! It’s also a family affair at Quintonil. Vallejo’s wife Flores runs the front of the house while he handles the kitchen.

Travel just 30 miles outside of Manhattan and you’ll find the most famous farmstead restaurant in the world. What’s a farmstead restaurant? It’s a restaurant with a 30 course tasting menu on an80 acre estate that includes an educational space for Food and Agriculture. Chef Dan Barber grows (and breeds) everything used in his restaurant on the Stone Barnes estate.

If you keep up on the latest eco conscious practices then you need to check out Stone Barnes. Dan Barber comes up with new environmentally friendly, low waste farming practices and you can take a tour of the property to learn his green thumb techniques. If you can’t get a reservation at the very popular Blue Hill restaurant try the casual cafe on the property for a taste of the freshest produce in New York.

Why should you dine at Pujol in Mexico City? Because it’s the brainchild of Mexico’s most famous celebrity chef Enrique Olvera. You’ll be trying arguably some of the best Mexican food in all of Mexico.

Chef Olvera pays homage to his Mexico’s history by using indigenous ingredients in his dishes. The menu changes seasonally, but you’ll always find the signature dish, Mole Neuvo on the menu. You should probably make a reservation at Pujol ASAP if you’re a fan of Mexican cuisine because you won’t find a better mole anywhere in the world.

If you’ve dreamed of dinning on world class food inside a glass cube then you quickly make a reservation at Steirereck in Vienna, Austria. This restaurant has been family owned for generations but is super-modern in its decor, plating, and cooking techniques.

Even more impressive than the interior design is how chef Reitbauer is modernizing traditional Austrian cooking. His dishes are culinary theatre with local ingredients at the center stage. Rather than order from the a la carte menu, go for the full tasting menu.

The White Rabbit is probably one of the top restaurants with the best view. The glass ceiling shows off incredible 360 views of Moscow.  You’ll feel like you’re in the real life story of Alice and Wonderland with all the whimsical decorations, glass dome, and colorful dishes.

What’s the best thing to order at The White Rabbit? Rabbit of course! The rabbit with mini cabbage rolls in foie gras is a standout on the menu. Chef Vladamir Mukhin recreates traditional Russian produce into creative, modern dishes.