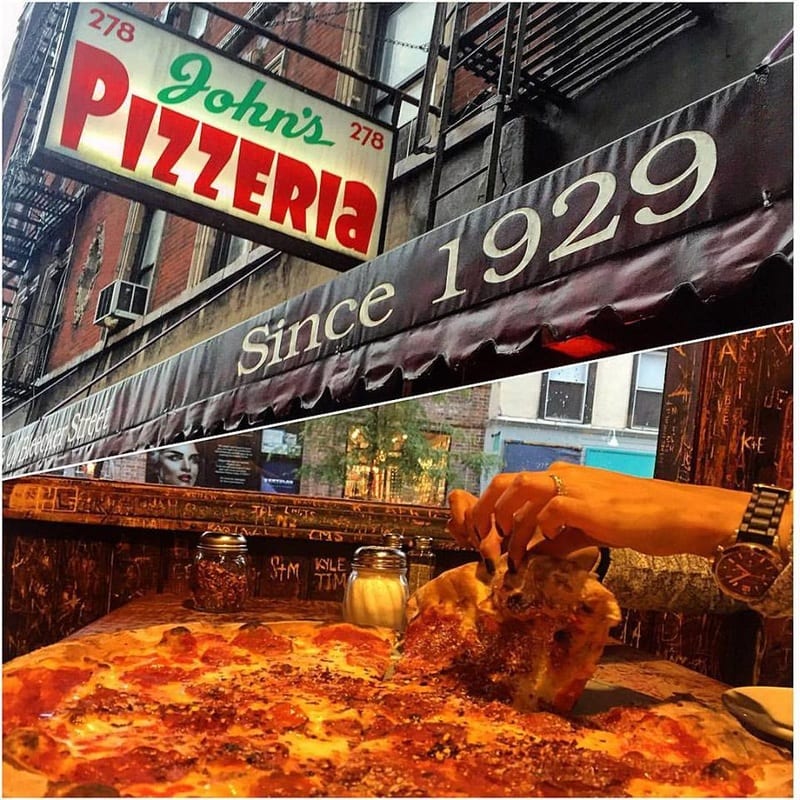 On the hunt for the best pizza in NYC? We’ve got you covered.

There has long been a debate over who has the best pizza in the US: Chicago or New York. While many will argue that Chicago’s deep dish pizza is the best pizza in the U.S. (or perhaps the world), our pizza-loving hearts side with NYC, where you can get dollar slices on pretty much every corner, at any time – day or night – that are pretty damn good.

With approximately 400 pizza joins in NYC, it can be hard to settle on a favorite. Many claim that Grimaldi’s has the best pizza in NYC, but with lines out the door of their Brooklynlocation, we honestly don’t think it’s worth the wait.

Artichoke’s has some of the best gourmet pizza in the city. Photo: Yelp

Compared to the other pizza places on our lists, Artichoke’s is the newest and only born-and-bred New York pizza joint that made ourfavorites list.

Founded in 2008 by two cousins from Staten Island, it quickly shot up the ladder of success and just two years after opening they opened up a second location, and, shortly after, a third. And today? They’re the proud owners of 12 locations across not only New York, but Miami and California!

A slice of the signature artichoke pizza. Photo: Yelp

Artichoke serves gourmet pizza. With slices starting at $5, they’re a bit more expensive than the other joints on our list but well worth it. The signature pizza is their namesake: Artichoke Pizza. With a crunchy crust and thick, rich, creamy topping, it’s akin to spinach artichoke dip butin pizza form. Not a fan of the veggie? Try their crab pizza, another favorite.

Make sure to time your visit to Artichoke well – the lines can be out the door! Photo: Yelp

All Artichoke locations (including Brooklyn) can be found here, but below, we’ll highlight their NYC spots.

Bring cash, as some locations are cash-only, and be prepared to wait. It’s not unusual for lines to be out the door and a wait to take 30 minutes or more.

Numero 28 isn’t your typical NYC pizza joint – it’s more your typical Neapolitan pizza kitchen. While we love NYC’s dollar slices dripping in grease (especially at 2 am), occasionally we like to branch out and actually sit down at a pizza restaurant and have something a bit more gourmet. Which is why we love Numero 28.

In true Napolitano style, the pizzas are cooked in a brick oven and served “by the meter” in a long, rectangular shape. The dough is thin and crispy, and some bites have a slightly burnt, smoky flavor (which we love). The sauce is fresh, and there’s just enough cheese. When we inquired about the crust, we were told it’s been passed down through five generations of pizza makers, or pizzaioli, as they say in Italian.

Try the signature pizza, the Numero 28. With buffalo mozzarella, truffle cream, prosciutto and mushrooms, it’s probably the best “gourmet” pizza we’ve ever tried and definitely a runner up for the best pizza in NYC.

The original Numero 28 opened in 2012 in the East Village, and in the years following, more locations have popped up in the West Village, Upper East Side, Upper West Side and Brooklyn.

It’s cash-only, so make sure to come prepared. Some locations do have ATMs in the back, but they have a hefty service fee.

Got food allergies? No problem. Gluten-free crusts are available, and most allergies can be easily accommodated.

Some of the locations offer BYOB specialsMonday through Thursday, so make sure to call in advance and inquire. Otherwise, a corkage fee is $9.

Yes, you can order food to go, but,honestly, it’s not as good. The crust doesn’t seem to keep once placed in cardboard, so we recommend eating in the restaurant.

Bleecker Street Pizza is located in NYC’s West Village and claims to have the best pizza in NYC. And we agree, as do The New York Times, the New York Post, and celebs such as Steven Tyler and Kelly Ripa. Well, as least one of the best pizzas in NYC.

Bleecker Street Pizza’s slices are massive. A large pizza can easily feed four. The crust is thin and crispy, with some bites having a slightly charred flavor. The sauce is simple and flavorful, and the cheese is in abundance.

While all of their pizzas (and calzones) are delicious, their signature pizza is the Nonna Maria, an old family recipe. With a thin, crispy crust, fresh mozzarella, homemade sauce, a touch of parmesan and fresh basil, this pie is certainly a crowd-pleaser.

Due to its small size, it’s not a great dine-in place. We recommend either grabbing a slice or two to go and walking while you eat, or grabbing a pie as takeout. Since it’s just a short walk from both Washington Square Park the Hudson River, you can grab a pie and picnic in the park.

Bleecker Street Pizza is perfect whether you’re craving a Netflix night in or a 2 am post-bar slice. The restaurant accepts both cash and credit, and delivery can be arranged through Seamless.

New York Magazine once referred to Joe’s Pizza as “slices of heaven,” and we wholeheartedly agree.

Serving slices and pies since 1975, Joe’s Pizza is a Greenwich Village institution that calls itself a “classic NYC slice joint.” It’s nothing fancy here: There is no table service, orders are taken over a counter, and it’s still operated and owned by Neapolitan Joe Pozzuoli himself.

What separates Joe’s Pizza from similar “slice joints” is the sauce. It’s slightly sweeter, and, combined with the crispy, slightly charred crust and the perfect amount of cheese, is one of the reasons it’s the best pizza in NYC. It’s also slightly less greasy than its fellow pizza joints (just slightly).

Another fun fact about Joe’s is that is was featured in Superman II.

The original Joe’s was located in the West Village, just 50 feet from where it stands today, on 7 Carmine St.

New locations have opened over the past decade, including:

While there are often lines out the door (particularly after 2 am), the line moves quickly, and it’s worth the wait. If you go to the West Village location (which we recommend), youcan grab your slice and eat in Father Demo Square, a little park across the street.

You can get Joe’s delivered anywhere! The pies are now available for shipping. Move to San Francisco and miss Joe’s? No problem! Order a pie and get it delivered in just a few days.

Don’t ask for a slice at John’s – this pizza joint serves pies only! Photo: Johnsbrickovenpizza

Similar to Joe’s, John’s Pizza of Bleecker Street (i.e., John’s) is a NYC institution, servingthe city since 1929. After much (delicious) research, we’ve come to the conclusion that John’s serves the best pizza in NYC.

The pizzas are cooked in coal-fired brick ovens, leaving the dough the right amount of crispy and chewy. The dough is what sets this pizza parlor apart from the others. Slightly sweeter than the others and slightly less crispy, it’s fresh and unique and oh-so-good. The tomato sauce is fresh and not overly spiced, and the toppings are deliciously fresh as well.

If you only have one day in NYC and the option of visiting one pizza place, go with John’s. They truly do have the best pizza in NYC.

Be prepared to wait. John’s does not take reservations, and on weekends at peak time, lines wind up the block. If possible, go on a weekday. Better yet, go for a late weekday lunch or early dinner.

No slices! Don’t even ask. As their sign boldly states, John’s is a pies-only pizza joint.

With nearly 400 pizza joint to choose from, there are bound to be differences in opinion on who serves the best pizza in NYC. Do you have a favorite we didn’t cover? Tell us below in the comments! Click “Next Story” below for more insporation on planning your next trip to NYC.