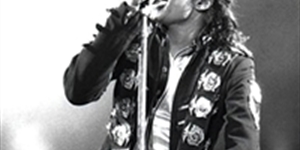 MTV launched on August 1st 1981, and the world of music would never be the same. Suddenly, the ability to make a video to accompany a song became a marker of a song’s success. It melded two different art mediums in a way that hadn’t been significant in the realm of pop culture before. Of course, MTV proceeded to crash and burn once the world of reality TV took over, displacing music videos altogether. However the impact of MTV on the music world was here to stay. These five videos appeared during the soaring importance of music videos, and as such makes them all the more impressive.

5 Wanna Be Sedated – The Ramones

Not what you might expect on a list of 80’s music videos, I Wanna Be Sedated is one of the most famous punk songs from the decade. And the video is visually stunning. Seeming, well, sedated, The Ramones are sitting at a dining room table eating cereal while slowly a circus like part unfolds around them. They do not interact with the chaos erupting around them, even when the various party goers attempt to interact with the band. What’s brilliant about the video is you keep watching, waiting for something to happen, waiting for something to erupt. The Ramones certainly can control their fingers and toes – they don’t do ANYTHING throughout the video. And then, more suddenly than they came, the masses disappear. Nothing really happens, but the song is so great, and the video manages to hold your attention so well, that it is truly the greatest moment for punk rock in the realm of music videos.

Not only did this music video break the barriers between music and visual art, it also broke barriers between white and black, and rock and hip hop. It crossed the great genre divide to create a piece of music and visual art that was easily accessible to a diverse audience. The video starts off with conflict – then, Steven Tyler literally breaks down the wall separating them, and they perform together. While the video has little to do with the lyrics of the song (which are more about young love and misfortune than breaking musical barriers), the video alone is ground breaking. Coupled with the beats and rap provided by Run DMC, the video and song combination is one of the most noteworthy moments of popular music history.

Who would have thought that Norwegian synth-pop would take over the airwaves with three little words. The video for Take On Me is fascinating. The video follows the love narrative of a pencil-sketched guy and a real-life girl. Seeing is believing with this video. Even today, with all our technological advances, the video for Take On Me still takes the cake for plain-and-simple-cool factor. The mix of pencil sketch animation and live action filming were revolutionary at the time, and even now retain their awe inspiring symbiosis. Additionally, the song is also undeniably awesome, and I haven’t met a single person who doesn’t attempt that high note (and fails miserably) with unbridled delight. The video won six MTV VMA’s, and is still one of the most eye-catching music videos to date. (Fun fact – the Barron music video is actually the second video to be released – the first featured the band playing on a blue background. This is so much cooler.)

Besides starting out like that “miracle of life” film we all had to watch in 10th grade biology, Sledgehammer is really freaking cool. The song’s message is heightened by the video’s frantic stop-motion, and each and every image is significant to the viewer. There is not one second that your eye wanders from the screen. The video won 9 MTV Video Music Awards. Whatever he means by “I wanna be your sledgehammer,” you know that it’s got to be something deep, and the video’s visual intrigue is undeniable. Even the dancing chickens seem somehow endearing (but also kind of creepy). Oh, and props to Peter Gabriel for having a mixed-race cast of characters in his video. For 1983, popular culture, that was revolutionary – just like every other second of this video.

Thriller is the most influential music video of all time. It was the moment that solidified MTV’s goal – it merged, brilliantly, music and visual art to create a hybrid new art form that relied heavily on the musical prowess of the band, and the visual prowess of a director. Spanning 13 minutes and 43 seconds, the video for Thriller is actually a short film, starring Michael Jackson and Ola Ray. Besides co-writing the screenplay, it also showcased Jackson’s stunning dance ability, and his pop-music genius. Deemed a video that “revolutionized the music industry” by the Library of Congress, Thriller was added to the U.S. Film Registry in 2009. If that doesn’t say it all, nothing else will. Thriller is undeniably an important piece of American cultural history.

In the first decade of music videos existence, these five claim the top spots because they managed to meld both art forms in a way that was not only artistically interesting, but ground breaking in their own rights. Experimenting with different types of animation, and different ways of visually representing their songs, these musicians managed to craft videos that would change the face of their music, and all music videos to come.