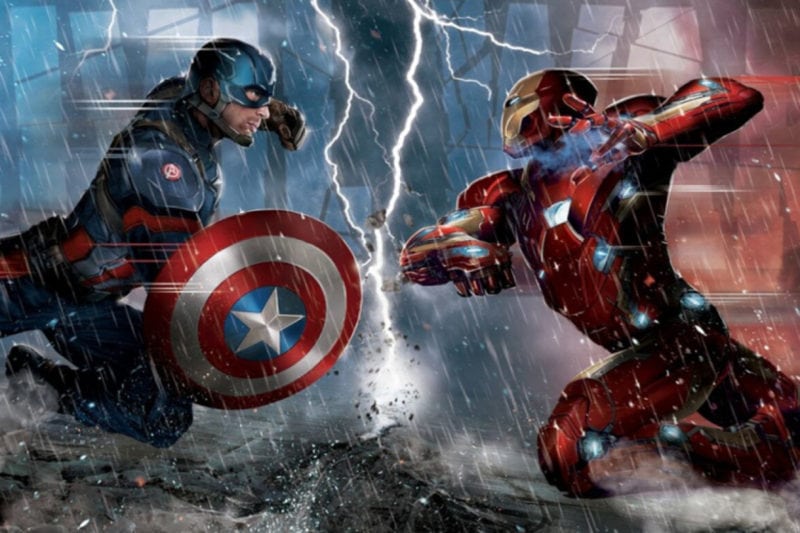 Marvel is on fire, rolling out box office hit after hit after hit. Black Panther and Avengers: Infinity War crushed ticket sales and stole even the snobbiest critics around. That’s just this year alone. But you knew that already, didn’t you? It doesn’t take a movie critic or box office analysts to know what the public is thinking. It’s easy. Marvel movies are the best. The only thing left to figure out is: Which are the best Marvel movies? That’s the million-dollar question.

As a Marvel Cinematic Universe (MCU) fanatic myself, I’ve volunteered to “labor” away, scouring the internet forall relevant Marvel chatter. I’ve studied what critics had to say about each film (the Tomatometer score shows how many critics approved the film)—and, more importantly, what fans had to say (the audience score shows the percentage of fan approval). And, I crunched the numbers to see which movie in the MCU hit all-time records in its opening week. (Did Infinity War beat out Black Panther after all?) The latter two, audience score and opening weekend numbers, are the primary factors in ranking the best Marvel movies. What better way to see how fans reacted than looking at their scores directly and seeing how many people hurried to its premiere?

Are you ready to see if your favorite MCU film made the top 10 best Marvel movies? Let’s start off by quickly listing numbers 20 through 10!

You hardly remember Edward Norton’s Bruce Banner debuted only one month after Iron Man, right? It’s no wonder it made the last spot.

Sorry, Norton, ever since Mark Ruffalo came on board, the MCU only has the vaguest memories of you.

Before there was law-defying, bearded Steve Rogers, there was bright-eyed and bushy-tailed Captain America. Sadly, audiences weren’t that intrigued by this version.

Sorry, Cap. You may have been the “first avenger,” but your origin story did not do so hot as you fighting against Stark and posse in Civil War. Fans like you more post-Civil War.

Stark fans, relax. Not every Iron Man film can make the top 10 list.

If you did watch this film, I know you’ll agree: out of Stark’s three solo films, this one had to be ranked lowest. It was too close to the original, with whacky scenes (Iron Man drunk, anyone?) and a lackluster villain (looking at you, Mickey Rourke). It did introduce us to the butt-kicking Black Widow. For that, we can all be thankful.

Thor’s first film had a lukewarm reception equivalent to Captain America’s. Thor’s debut was simply too square and Shakespearean to root for. If anything, Loki won hearts over by simply… not being dull? Sorry, Chris Hemsworth! Your version now is 1,000 times cooler.

It’s shocking to see Thor’s sequel ranked higher than the original. But, hey, that’s life and it did get better reviews and had a bigger box office opening weekend than Thor.

The third Asgardian installment definitely benefits from Natalie Portman’s disappearance. Let’s face it, that romance was as forced and awkward as elitist actress Natalie Portman starring in a superhero film where she dates the God of Thunder… Oh, wait…

Now, here’s a sequel that did almost as well as its first.

Paul Rudd is lovable, Michael Peña is laugh-out-loud funny and now there is a tie-in to Infinity War. Hook, line and sinker!

Marvel must have gotten the memo, or, more likely, read the bad critic reviews. Because the film following the flop of Iron Man 2 majorly improved.

Here’s a film that explores Tony’s character more than ever. It’s still funny as hell but less whacky. It’s wittier and delves deeper into Stark’s psyche.

You may have noticed this film did not make as much as its sequel—that’s right. But what Ant-Man lacked in its opening weekend, it made up for in reviews.

Just look at how much better audiences and critics received it compared to its predecessor. It was inevitable. I mean, could Michael Peña get any funnier than in his moments here? Nope.

It’s almost laughable now to see the Avengers go up against anyone who isn’t Thanos, but, alas, there was a time. Once upon a time, there were no Infinity Stones and all the Avengers were still alive. Too soon?

The second Avengers film had plenty to cheer on: Black Widow and Hulk eying each other and finding out what’s up with Hawkeye.

Here’s another sequel for you. This time it’s the second Guardians installment.

This one didn’t make the top 10 cut, but that doesn’t mean it’s any less epic. The film was just as fun and rip-roaring as the first. It had new dynamic characters, like Star Lord’s godly-dad and our beloved Mantis. However, perhaps it was a bit too tried-and-true to beat out the original.

And now, let’s see if your number 1 MCU film made the list: Here are the top 10 best Marvel movies!

The origin story of Doctor Stephen Strange came out during Marvel’s red-hot streak, following 2015’s Ant-Man and 2016’s Captain America: Civil War. But that wasn’t a guarantee audiences would be up for a psychedelic film about a sorcerer saving the world from mystic forces. Yet in the end, Doctor Strange was a success!

The film was successful in many ways. It had an A-list cast. Benedict Cumberbatch played Stephen Strange, Rachel McAdams was cast as his confidant and the film had multi-award-winning Tilda Swinton as Strange’s mentor. The film also felt new. It avoided old tropes, like Strange and Palmer’s non-obsessively romantic relationship. Not to mention the fact that the film looked like a kaleidoscopic acid trip—all of which secured its place in the top 10 best Marvel movies.

Of course, MCU fans are going to love a film centered on Captain America. Steve Rogers was the first Avenger, after all.

The film is cherished for Steve’s signature hand-to-hand combat and his elite team (Black Widow and Falcon). Not to mention, it’s full of drama. There’s the double-crossing from Cap’s own people, plus the return of Hydra and Bucky. Remember Bucky, guys (a.k.a. Winter Solider)? If the juicy plot wasn’t enough to keep us watching, the Russo brothers added perfect melodrama with the return of Cap’s best-friend-turned-assassin. This was one of the best Marvel movies for the adults. It was all human-created drama set in a realistic world.

Every superhero film follows the same general outline: audience meet superheroes, superheroes meet villains. This is a formulaic success and you know how that saying goes. If it ain’t broke, don’t fix it. Right? Wrong. Marvel is all about switching things up.

Civil War is exactly that. It’s an inner battle where the Avengers’ foes are their teammates. Who doesn’t want to see who’d win in a battle between Captain America and Iron Man? Critics raved about it. NPR said: “It’s the Vibranium standard for super-team flicks.” That means Captain America: Civil War is top-notch. It’s like that special, expensive booze you keep above the rest for special occasions: the best of the best.

I know we’re all still buzzing from Infinity War, but in order for us to have the Infinity Stones and Thanos, we needed something else. That something was the formation of the Avengers.

Mega-Marvel fans couldn’t wait to see Earth’s mightiest heroes team up to kick some major super-villain ass. In this case, it was Loki… as per usual. It took the cake as the highest-grossing box office weekend of the MCU (at the time). That’s not surprising to comic-lovers. We know how epic crossovers are.

Talking about the start of the Avengers, we can’t forget the godfather of it all. There would be no MCU without Iron Man.

It stood apart from other superhero films around the same time. Critics absolutely loved Tony Stark. He was witty, snarky; a breath of fresh air compared to unrealistic, purely “good” heroes of the past. I ranked this film higher than The Avengers because, comparatively, the first MCU film received some of the best critic and audience rates. It also took in a large chunk of cash in its opening weekend. Iron Man did this withoutleaning on any other movie. It can be credited to starting off the MCU on the right (iron) foot, making it one of the best Marvel movies ever.

Some people think Marvel has it easy compared to DC. The latter has struggled with making movies about iconic superheroes, superheroes already established. It’s hard for viewers to accept a different, possibly worse version. But Marvel has faced this challenge, too, with Spider-Man: Homecoming.

Spider-Man is as iconic as it gets for a superhero. Sony’s trilogy starring Tobey Maguire was incredibly successful, so many fans worried about another take on Peter Parker. Fortunately, the movie was a massive success with fans and critics alike. Tom Holland’s version was better than previous interpretations. His Peter was exuberant, light-hearted and actually a teenager!

Guardians is undeniably one of the best Marvel movies. It stretches beyond the usual space, galaxy and characters we usually see in a superhero film. I mean, had we seen a raccoon or tree creature kick ass on the silver screen before?

This MCU addition showed how much variety the studio has. Guardians of the Galaxy is an intergalactic, hilarious ride, one that blasts all the jams.

And now, we’re on the top 3 best Marvel movies of all time. These ones get tricky because each has done so well. Our number 3 is Thor: Ragnarok.

I have to admit, I was not the biggest Marvel fan until this film. It was unlike anything before. It somehow had the levity of Guardians but this time it was fan-favorite characters cracking jokes. And a badass AC/DC track blasting hard rock as our favorite Asgardian leveled up. Decider called it “a drastic departure from what’s come before. Gone are the Shakespearean dramatics and Game of Thrones undertones, replaced instead with sleek synth riffs and the crackling energy of an ’80s buddy adventure.”

Black Panther is a box office phenomenon. As of right now, it is also the highest-grossing MCU film. Every day it seems like there is a new record the film has broken.

So, what makes Black Panther one of the very best Marvel movies? The film was about, yes, caped crusaders saving the world, but this movie, in particular, dealt with deeper sociopolitical themes. It did this in the guise of an action-packed blockbuster. It’s about community, doing what’s right, and 100% black excellence. Thisis a film that viewers around the world needed. It made us hope for a Wakanda of our own.

Thanos. Infinity Stones. And (SPOILER ALERT) half of our favorite heroes completely vanishing off the face of the planet.

The Russo brothers know how to lead fans on and rip the carpet from under their feet all at once. That’s why Infinity War is the best of the best. Did you laugh? Uh-huh. Did you cry? Check! Do you not know what to do with your life anymore? I’m right there with you. All fans can do now is wait… or watch the film for the hundredth time? Who knows? The film could very well take Black Panther‘s place as the MCU’s highest grossing film. Whether it does or not, though, it’s in our top spot as the best Marvel movie of all time.