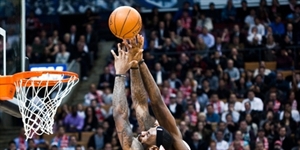 What’s most important to the enduring legacy of an NBA player? Scoring prowess? Leadership? Championships? None of the above. While those are all important factors, simply having a great haircut is still the surest way to guarantee that you’re forever imprinted on the memories of NBA fans. Just ask anyone if they’ve forgotten about Dr. J’s spacious and spectacular Afro. They haven’t. But who then, can lay claim to having the best haircuts in the league today? Here are the top five haircuts in the NBA. 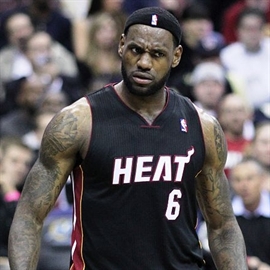 This may seem like an odd inclusion, but someone has to acknowledge the strange manner in which LeBron James has elected to address his receding hairline. In recent years it’s become clear that King James’ hair seems to be making a hard move to the back of his head, but rather than embrace it or shave it, LeBron has decided to commission wider and wider headbands that go higher and higher up on his head in order to cover it up. At this rate, LBJ will be bald in four years and wearing a full knit ski-cap on the court. Though now that he’s an NBA champ, we think it’s probably time to stop living in denial and admit that wearing headbands as thick as tube tops isn’t the answer. 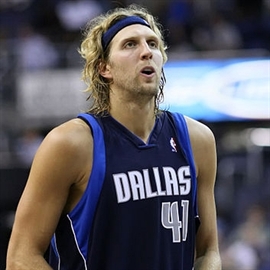 Whatever look he happens to be sporting at the moment, one thing is clear, Dirk can rock a do. But obviously, when including him on this list, we’re referring to the 7-footer’s beautiful, blonde, flowing locks. When Dirk has long hair all just feels right in the world. We genuinely defy you to think of anything smoother than watching Dirk knock down a picture-perfect, game winning, three-pointer as his feathery, billowing tresses bounce to and fro. It’s visual poetry. And while you may think we like him a bit too much, don’t act like you wouldn’t climb a stepladder and run your fingers through that woolly German mop if you had the chance. 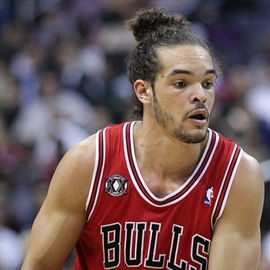 Some would say Joakim Noah has got a face that only a mother could love. So how does he make the best of it? Distraction. Rather than focusing on his rather unsavory mug, you’re all too busy staring at his frizzy mop top that reminds you of that girl in your seventh grade social studies class who always smelled like old mustard. A relentless rebounder and defender, Noah seems to get stronger and stronger as the game progresses, while his opponents often find themselves lost in the tangled mess that is his wild, unkempt, mesmerizing mane. 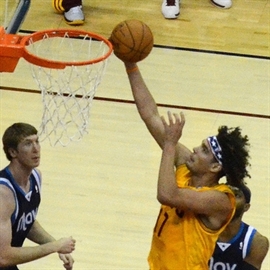 Few grown men can pull off rocking the same hairdo as Shirley Temple, but Anderson Varejao somehow manages to make it work. A player that is always goes full speed and always gives 110%, Varejao is a veritable whirlwind of sweat, effort, and bouncy, voluminous curls when he hits the hardwood. The hard-fighting, 9-year vet has become known as a player opponents dread facing, knowing that his smothering D and workman-like offense are only compounded by the humiliation of getting dominated by a man that looks like a 6’10” Raggedy Ann. 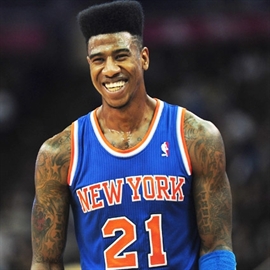 Iman Shumpert is just a second-year man out of Georgia Tech, but his hair is a cagey 25-year veteran. Rocking a cut that would make flattop pioneers like Kenny Walker and early Will Smith truly proud, Shumpert easily takes the top spot on this list. When at its fullest, Shumpert’s flattop is a perfectly groomed tribute to a time long gone by, when shorts were short, hair was high and everyone’s favorite color was neon anything. Iman Shumpert may be a young man who is still developing as an NBA player, but it’s safe to say that the exquisite do that sits atop his head has already reached its full potential.

So, there they are, the five finest cuts in the basketball world. Think we missed someone? Does Steve Nash’s Canadian-emo look deserve a spot? Or perhaps Kenneth Faried’s 25-pounds of braids should’ve made it? Why not throw together a list of your own and let us know where we fell short?