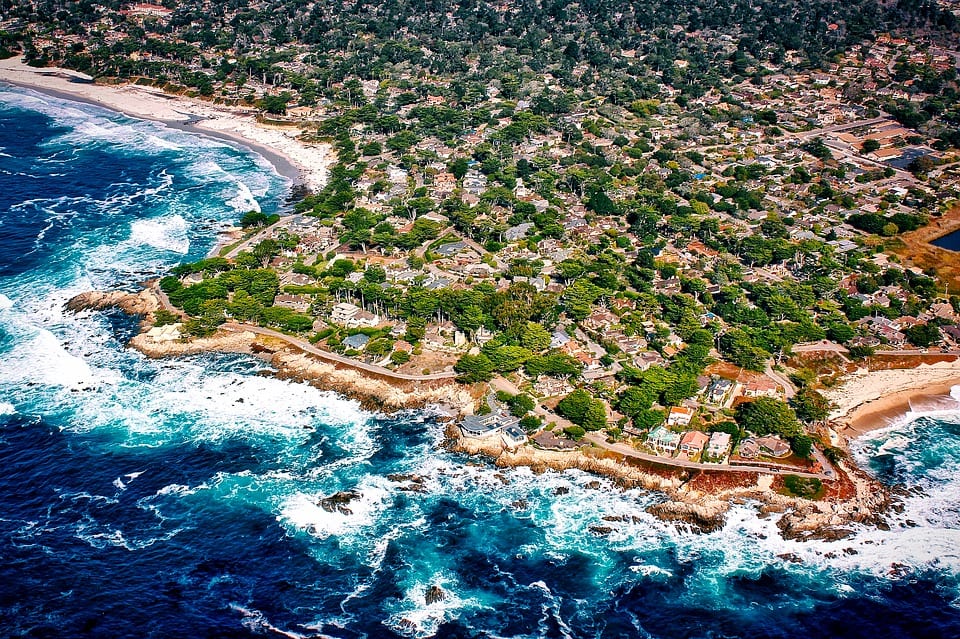 If 2017 reaffirmed anything, it’s that the U.S. is home to a wide range of people with a wide range of opinions. It’s actually quite amazing how large the country is and all that it includes.

With that in mind, we narrowed down the country’s Top 20 cities of 2017, weighing their livability in terms of cost and income with their local offerings that make them stand out. See if your city made the cut!

Bozeman is a beautiful college town (home to Montana State University) nestled between four mountain ranges and just 90 minutes from Yellowstone National Park. Perfect for outdoor lovers, residents in Bozeman enjoy fishing, hiking, whitewater rafting, skiing, and so much more. Bozeman boasts a charming downtown and is home to art and music festivals throughout the year. 14% of residents bike or walk to work, and the average commute is just 13 minutes! Unemployment rates are low at just 2.3%.

19.) Carmel By The Sea, California

Located on the Monterey Peninsula, Carmel is a quaint, charming, coastal city with adorable shops and a great selection of restaurants. A small community with less than 4,000 residents, some call Carmel a retirement community, as it’s median age is 54. Home to the legendary Pebble Beach Golf Course and located just off of scenic Highway 101, Carmel is also a hotspot for tourists.

Approximately 10 miles west of Boston, Newton is referred to as the ‘Garden City.’ It is a Boston commuter town and an affluent city with excellent public schools. Unemployment is low, and median household income is higher than $121,000 a year. Newton has an adorable downtown and is also home to Heartbreak Hill – one of the most difficult section of the Boston Marathon. Newton is also proud to be the namesake of the Fig Newton cookie.

Not only is Charleston one of the best American cities, but Travel and Leisure ranked it as one of the best cities in the world for the fifth year running. Affectionately referred to as “Chucktown,” Charleston has it all: great weather year-round, a bustling downtown, wonderful restaurants, and beautiful beaches. Unfortunately, poverty rates are high in Charleston at 21%, slightly above the rate for South Carolina and the national average.

A Seattle suburb nestled between Lake Washington and Lake Sammamish and set against the Cascade Mountains, Bellevue is nicknamed ‘City in a Park’ and is an outdoor lover’s dream with hiking, biking, camping, water sports, and so much more. In addition, it hosts numerous festivals throughout the year. Bellevue is a diverse city, with 40% minorities, and boasts some of the best public schools in America.

Located roughly 20 miles southeast of Phoenix, Gilbert has experienced rapid growth over the last few years – nearly 3 times the national average. In addition to its high median household income, Gilbert boasts a low crime rate, good public schools, and affordable healthcare. The town is within close proximity to Phoenix, for those wishing to visit the city, but also has a lot to offer: ancient ruins, farmland and fresh produce, wineries golf courses, an art bazaar, and even wakeboarding!

Maryland is the wealthiest state in the country, due in part to high-income cities such as Waldorf. Just 23 miles outside of Washington, D.C, Waldorf’s poverty rates are in the bottom 25%. Many of its residents work in D.C. or head to the nation’s capital on weekends to visit museums and other cultural centers. Waldorf itself isn’t lacking in entertainment: it boasts a greater concentration of restaurants and cafes than is typical nationwide, as well as The St. Charles Towne Center, a two-story, 981,000-square-foot shopping mall that is considered the major retail spot for Southern Maryland.

Never heard of Hoover, Alabama? It’s okay, we hadn’t either, but we’re glad we have now! Hoover is a suburb of Birmingham and the wealthiest city in Alabama, with the average HHI nearly $80,000. This – combined with the low cost of living (goods and services cost $0.09 less on the dollar than they do nationwide) – makes for a pretty good quality of life in Hoover. Hoover is perfect for outdoor enthusiasts, boasting several parks, campsites, hiking trails, and golf courses.

Powers Lake, one of the many outdoor areas in Woodbury, MN. Photo: Wikipedia

We’ll be honest: if you don’t like the cold, Woodbury is not the city for you… However, if you can deal with a little snow (ok, a lot) it’s worth looking into. Located just 10 minutes east of St. Paul, Woodbury is an educated city, with nearly 60% of its residents holding bachelors degrees. It also has less poverty and unemployment rates than nearly any other city in the U.S, with only 2.3% of its residents living in poverty. Unemployment is also low at 3% versus the national average of 4.9%. In warmer months, Woodbury is perfect for outdoor enthusiasts, with 45 parks and approximately 100 miles of trails, and two golf courses.

Just an hour outside of Chicago, Naperville boasts low crime rates (especially when compared to nearby Chicago) and is one of the most educated cities in the U.S., with nearly 70% of its adult residents holding a bachelor’s degree – more than double the national average! It is a wealthy city, with the average household earning $116,482, making it the 12th highest of any city nationwide. Many of its residents commute to nearby Chicago for work.

Located just an hour south of Washington, D.C., Dale City is a wealthy, diverse residential area with strong Black and Latino communities. It boasts high household incomes, low poverty rates, and its large waterpark and farmers market are a highlight for both residents and visitors alike. Not everything is perfect in Dale City, however; it has the ‘honor’ holding one of the highest percentages of people with commutes over 45 minutes, as many of its residents work in D.C.

John’s Creek is a suburb of Atlanta, located about an hour outside of Atlanta’s city center. It is a family-centric city and has one of the best-educated populations in the country, with 60% of adults having a bachelor’s degree. High schoolers in John’s Creek also boast some of the highest test score averages in Georgia.

Photo: Laurie Reed/Courtesy of the Town of Centennial.

Centennial is just 15 miles south of Denver. A new city, incorporated in 2001,  it offers more than 2,500 acres of open space and parks and is perfect for those who enjoy the outdoors. According to a range of socioeconomic measures, it is the second most livable city in the US. Residents enjoy a high standard of living due to high household incomes and a low cost of living. Poverty rates are low at 2.7% vs the US average of 14%.

One of the fastest-growing cities in Indiana, Carmel is located roughly 20 miles outside Indianapolis. Residents of Carmel feel safe, are well educated, and are both healthy and wealthy. Carmel has been rated one of the safest places in the country, and nearly 70% of the adult population holds a bachelor’s degree and the median annual household income is over $113,000. As Carmel is a relatively inexpensive town (goods and services cost $0.90 on the dollar when compared to the national average), people are able to live very good lives on their salaries.

Single? Here’s an even better reason to visit (or move) to Carmel: Money Magazine ranked it #6 on their list of 10 Best Places For Singles Now.

Asheville is a city on the verge. A little progressive town nestled in the heart of the Great Smoky Mountains, the North Carolina town is a lively oasis. The birthplace of the moog musical instrument, Asheville boasts a healthy music scene, energized by local talent and regularly visited by touring artists. A close-knit community fuels Asheville and enables its arts and culture scene to thrive.

Let’s get this out of the way: San Diego is a bit pricey when it comes to housing expenses. With that in mind, its beaches afford a luxury that can’t be beat. It’s a city built in the heart of a coastal paradise. There’s even an island just a stone’s throw from downtown, reachable by bridge or by a half hour ferry crossing.

Warm and sunny, San Diego offers a relaxing climate that’s worth the price. That said, it’s still plenty more affordable than other California cities like San Francisco and Los Angeles.

For years, Austin has been attracting tech jobs, while retaining its livability and quirky reputation. It’s a city with a laid-back vibe, perfect for outdoor activities and whimsical adventures. Every year it hosts the annual SXSW music festival, which hosts a bunch of free events outside of the official panels and showcases.

Despite its southern location, you’ll need clothes for every season. Its weather ranges the full gamut, from hot and sunny to cold and rainy with monstrous (and magical) thunderstorms to boot. And it’s true, everything is bigger in Texas. As the capital of the Lone Star State, Austin is home to the state capitol building, which outsizes even the White House. That said, even as the capital, Austin doesn’t necessarily speak for the rest of the state. It’s known to be quite a bit more liberal than the rest of Texas.

A work/life balance can sometimes seem like the impossible dream, but Portland proves it can be done. It’s practically a city-wide initiative and seems to be the primary attraction for the bulk of the city’s residents. The TV show Portlandia joked that Portland “is the place young people go to retire,” if that is any indication…

Its renowned food scene is ever expanding and still affordable. With tons of greenery, it seems as if there is a trail waiting to be explored around every corner. Biking accounts for almost 10% of all commutes. It’s been said that Portland a small-town dressed up like a big city and that feel permeates why it makes a good place to settle in.

Denver is an ever growing mountain metropolis with a wide-ranging climate that is perfect for anyone who loves the outdoors.

Creeks cross through the city, its skyline is augmented by towering silhouettes of the Rocky Mountains and trees populate its streets and parks in abundance. In fact, referred to as Denver’s Urban Forest, its tree cover offers shade to 19.7% of the city thanks to over two million trees across the Mile High City. And despite being a land-locked western city, it retains a high level of diversity, making it the number one American city to live in, in 2017!

Did your city make the cut? Let us know in the comments below!