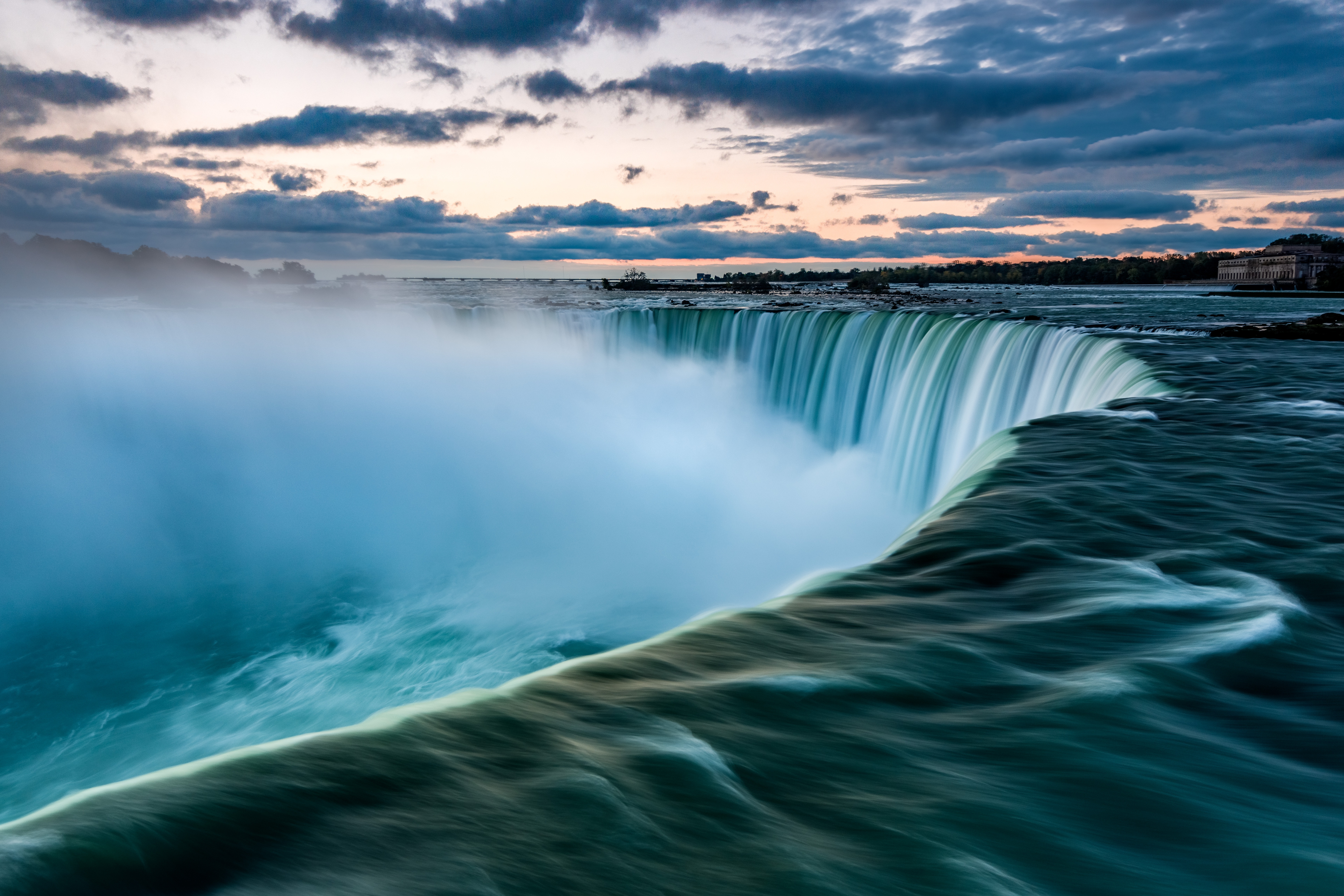 Our planet is filled with natural wonders and breathtaking beauty on every corner. Nature is undefeated when it comes to taking our breath away with its vast mountain ranges, stunning beaches, and mysterious oceans. Waterfalls are indeed one of the most beautiful gifts from nature. They are not only a powerful display of the elements but also a visual breath of fresh air.

Here are the most breathtaking waterfalls around the world.

The Zambezi River crosses the border of both Zambia and Zimbabwe and its waters descend 355 feet down, creating Victoria Falls or, Mosi-oa-Tunya, which is its local name and means “The Smoke That Thunders.”

Victoria Falls is the largest waterfall in the world, and its spray can be seen from over 30 miles away, and the booming noises can be heard from more than 25 miles away. At the peak of rainy season, more than 500 million cubic meters of water plummet per minute into the gorge, over a width of 1 mile, and into a gorge more than 330 feet below.

There are sixteen freshwater lakes arranges at various elevations, resulting in a beautiful range of cascades with varying hues of blue that regularly change based on the quality of minerals within the waters.

Located on Scottland’s Isle of Skye, Kilt Rock Waterfall is a beautiful waterfall that cascades down the face of the cliffs on the Trotternish Peninsula.

With its vertical basalt columns forming pleats, many believe it resembles a Scottish kilt.

There’s a reason this waterfall may look familiar: Manawaiopuna Falls played a starring role in the movie ‘Jurassic Park’ and has led to the site being affectionately referred to as Jurassic Falls.’

The 360-foot high waterfall is located on the island of Kuai in Hawaii.

According to a Native American legend, Multnomah Falls was created in efforts to win the heart of a princess who wanted a hidden place to bathe.

The waterfall sits amidst a two-acre park, with an observation deck and lodge.

Wallaman Falls is the highest single-drop waterfall in Australia. Water runs off Stony Creek in one long flow, plummeting nearly 900 feet down.

Located in Girringun National Park, it is part of the Wet Tropics World Heritage Area, which is home to some of the oldest rainforests in the world, plus an array of endangered animals and plants.

Located in The Philippines in Badian, southern Cebu, The Kawasan Falls is widely considered one of the most beautiful waterfalls in the world.

Located between mountain peaks and surrounded by tropical vegetation, the falls feature turquoise waters and are open to swimmers.

Located in Ireland’s Killarney National Park, at the base of Torc Mountain, Torc Waterfall is an 80-foot high natural wonder.

Located on along the Kerry Way walking tour, it’s thunderous falls originate from the ‘Devil’s Punchbowl,’ a Glacial lake on the top of Mangerton Mountain that once supplied water to the town of Killarney.

Waipoo Falls is a thunderous 800-foot waterfall in Waimea Canyon on the island of Kauai.

We recommend seeing the falls from the Waipoo Falls Trail hike, a 3.2-mile hike that will take you through rainforests and canyon rims ending at the top of the waterfall. Hawaii is known for its splendid waterfalls, and this is one not to be missed.

Ventisquero Colgante Falls, translated to ‘Hanging Glacier’ in English, is located in Chile’s Queulat National Park. Melting water from the glacier creates two plunging waterfalls atop a slab of angled bedrock, then flows underneath into a small lake, Laguna Témpanos. There is yet to be a consensus on the length of the falls – some say it plunges 1400 feet, others say 2000.

The falls are best viewed during warmer months, as much as half of the falls can be covered with snow and ice during the colder months.

Located on the Congo River in the Democratic Republic of the Congo, the falls drop 315 feet over a course of nearly 9 miles. The most dramatic section of the waterfall is one 70 foot drop.

Boyoma Falls, formerly known as Stanley Falls, is located in the Democratic Republic of the Congo and spans more than 62 miles across the Lualaba River. It consists of seven cascades but despite its width, plummets just 30 feet in total.

It is the largest waterfall by volume of annual flow rate. A rail line runs around the falls and is one of the best ways to experience this massive phenomenon.

Angel Falls is the highest uninterrupted waterfall in the world with a height of approximately 3,212 feet, and its longest drop at 2,648 feet.

It is protected by Canaima National Park, the third-largest national park in the world. During the rainy season, the falls split into two separate waterfalls and its mist can be felt from miles away.

The highest waterfall in New Zealand, Sutherland Falls is a series of three cascades and has a total drop of nearly 2,000 feet. The Falls are fed by a small like, Lake Quill, which is held by a small rock basin formed by ice-action during the Ice Age.

The best view of the falls is from directly overhead, via a helicopter, so you can see not only the falls but Lake Quill as well.

Baatara Gorge Waterfalls is located in Northern Lebanon near Balaa. The waterfall cascades more than 800 feet down into a cave, the Baatara Pothole.

Baatara Waterfalls are also known as ‘Three Bridge Chasm’ as it flows down through three naturally built rock bridges.

Havasupai is roughly translated to “The people of the blue-green waters,” which refers to the beautiful turquoise color of Havasu Creek.

Hidden inside Arizona’s Grand Canyon, Havasupai Falls is created from the Havasu Creek and is a stunning crescendo of azure blue water against a backdrop of red rock and the most striking of all fall inside the Grand Canyon.

President Theodore Roosevelt once called Burney Falls the ‘Eighth Wonder of the World’ and it’s easy to see why. Located in McArthur-Burney Falls Memorial State Park 60 miles north of Redding, California, Burney Falls is a 129-foot high fern and moss-covered cascade that appears to have come out of thin air.

In reality, the waters emanate from an underground spring above the falls with a near-constant flow of 100 million gallons of water a day – even during dry summer months!

Located in Tamilnadu state, South India, Hogenakkal Falls is known as the ‘Niagra of India’ and an easy day trip from Bangalore.

Located 750 feet above sea level, the falls are a seemingly never-ending river surrounded by beautiful hills and herbal plants. The best season to visit is soon after the monsoons when the river is at its peak.

Langfossen Falls is situated in Etne, Norway and, with a height over 2,000 feet, is the 5th highest waterfall in Norway and the 16th highest in Europe. In 2011, CNN ranked it one of the ten most beautiful waterfalls in the world.

A round trip hike from the base of the falls to the top is approximately 4 hours, and picnic spots are available along the way.

There are tons of natural beauty in our very backyard to explore. The United States is filled with beautiful natural parks and mountain ranges that give way to cascading rushes of water. In Yosemite National Park, the Horsetail Fall is a seasonal waterfall that only flows in the winter and the spring. In February, the sun and water work to create a sort of fireball optical illusion.

If you’re standing at the right angle and with the perfect weather conditions, the waterfall glows orange and red.

Photo by Picturist90 on Shutterstock

Africa is a continent overflowing with untapped natural beauty waiting to be explored. There are plenty of adventures awaiting the outdoorsy traveler in South Africa. In the heart of the Drakensberg is Tugela Falls, the highest waterfall in Africa. The Tugela Falls begins at the highest point of the Royal Natal National Park and falls into several smaller waterfalls.

The Ban Gioc Detian Falls is the name for the collection of waterfalls in between the national border of Vietnam and China. The vibrant colors are a dream and the sound of cascading water can be heard from far away. Although both waterfalls can be viewed from the Chinese side, the Vietnamese side is definitely worth viewing.

They are ranked the largest waterfall in Asia and the perfect destination for tourists traveling throughout Asia. The rapid rush of water can be best seen right after the summer rainy season.

This UNESCO World Heritage site is known as Australia’s tallest single-drop waterfall, with an impressive 879 ft drop that attracts hundreds of thousands of tourists every year. The Wallaman Falls are on the Stony Creek located in the Wet Tropics in Northern Queensland, Australia.

This series of beautiful waterfalls are a sight to behold and can be enjoyed while hiking through the Girringun National Park.

The Iguazu Falls are perhaps one of the most magnificent systems of waterfalls in the world. The falls offer jaw-dropping views and are surrounded by the lush green rainforest filled with hundreds of species of wildlife and plants. They straddle the border between Brazil and Argentina and split off into over 250 individual waterfalls.

Thousands of tourists flock to see the Devil’s Throat or the point where the falls form a U-shape every year, and because of its popularity, the falls have been named of one the seven natural wonders of the world.

Want to travel more? We do too! Click next to see the most beautiful islands.