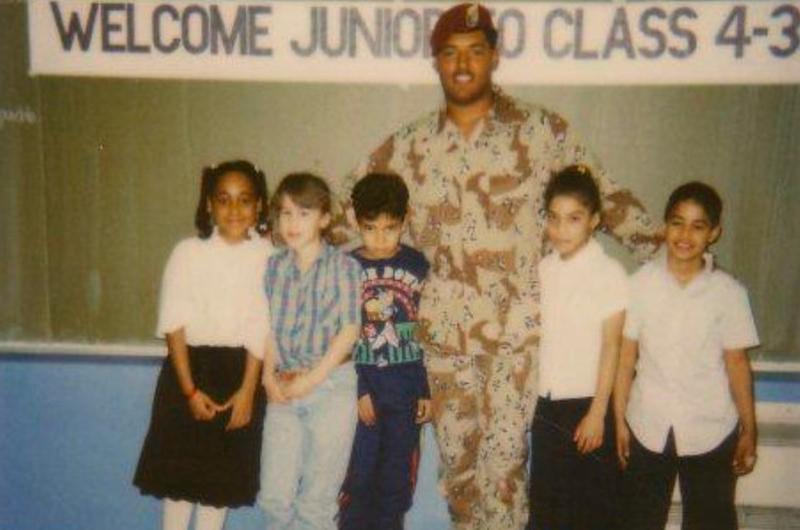 While driving past an embankment in 2008 in Afghanistan while serving for his country, Joe would stumble into something more than just sinister.

Joe was among four men in the vehicle when the road crumbled beneath them and the car went plunging water below them. He then snapped out of the memory when he heard the judge before him clear his throat.

It was 2008 when Joe stepped into a heavily armored truck with three comrades. The doors were so armored they had to be opened and closed hydraulically.

The truck was going down a road right next to a river when the road suddenly wasn’t underneath them anymore. It rolling down the bank and into the river.

Joe recalls the memory, “The water starts rising and coming up to my head, I’m having trouble getting my seat belt off.” Luckily, his comrade was there to fish him out of his seatbelt, but they both realized that there was a much bigger problem at play, they were in a sinking tomb.

“You can’t see the water rising because it’s pitch black. You can feel the water rising. Pretty soon the water comes up to a point where it is up to our chin. Then I hear a gurgling sound.”

Joe then found out about the gas bottles that were leaking inside the truck. They had been damaged when the truck fell into the water. This means that amongst the water rising up their air was contaminated with gas.

Joe felt himself struggling to stay conscious as the cocktail of air and gas entered his lungs. He remembers how he felt, “I’d see these things that weren’t there, and I was hallucinating,”

“I thought I had died.” The minutes would feel like hours before anyone came to aid them.

Pulled From The Wreckage

Joe remembers a team finding him and ripping him out of the wreckage. He remembers leaning on soldiers as they walked him up back onto the road.

He made the mistake of looking back at the truck where he saw an image that he would never forget. And I look to my left, and there are three people laying there.”

He would never fully recover from the ordeal and said that he didn’t just lose comrades, but brothers. He would start to suffer from flashbacks after that.

He would randomly remember the night from anything as small as the smell of fuel. This would be followed by anxiety attacks and nightmares. He never even wanted to talk about that day.

On top of that, Joe knew that adjusting to a normal life after his service would be hard. But with everything going on no one would ever understand what he was going through. Soon after arriving home, he would develop a habit that would help with his pain, even if it was for a few hours before.

He starting drinking at home and found that it really helped with his Post-traumatic stress disorder (PTSD).

A Habit Found Him

“I wouldn’t drink because I liked the taste of beer, it was when I was angry, or if I was hurting.” This would soon bleed into his normal life as he would be pulled over one day while driving under the influence.

He would have to go before the judge scores of times, submitting urine tests to prove his sobriety each occasion, but Joe couldn’t give up the bottle and he faked one of his later tests.

The judge, Lou Olivera, believed that Joe should be held accountable for his actions, and as quickly as that Joe was sentenced to a night in prison.

What no one knew was that judge Lou was too an army veteran, if anyone it would be him that understood what Joe was going through, yet here he was, putting Joe into a tiny cell alone or a whole night.

12 hours of reliving the nightmare in the dark long ago. But the judge was not a cruel man, he knew Joe would suffer coping with isolation so he came up with a radical plan.

On the day that Joe was to report to jail, Lou decided to meet him there, mostly for reassurance “When he showed up, I could tell visibly he was under distress,” Lou remembers.

“He was shaking. He was trembling. He was sweaty.” Judge Lou remarked. And this was before Joe had even entered the cell. What would happen when those doors closed behind him? Locking him in for the night.

The walls got closer and if Joe stretched his arms out he could touch both walls on either side of him, but it felt like the cold, dark box was shrinking in on him, this door too was immovable just like the trucks doors had been on the night of the accident.

Suddenly he was back in the truck, cold water up to his chin, the smell of gas in the air, no escape.

The flashback wouldn’t stop, “I put my hands over my head and put my head down.” He was trying to think of being anywhere but here, but it was impossible.

His skin crawled and cold sweat formed over his whole body. The gate swung shut behind him, “It just kind of echoed in my head, I was so nervous,” Joe says.

Joe began to have vivid flashbacks of the night he and his team got trapped inside the submerged vehicle.

“In the truck, I didn’t know I would get out of there,” Serna says. “I only had one option that night, and it wasn’t a good option. In the cell, I reflected on that.”

Waiting At The Gate

A rattle at the gate jolted him from his waking nightmare. Joe looked up to the gate, knowing his time was nowhere near complete but praying that by some miracle he could run straight out that door. Instead, he saw judge Lou.

The judge smiled and Joe and Joe kind of smiled back. The security footage captured everything.

“Standing right there is Judge Lou Olivera with a big smile, Joe recalled.

“And I kind of smiled, too, because he was holding a tray of food. He comes in and he sits on the bed. ‘Scoot over.’” Joe remembers him saying.

“They closed the door and locked it,” Joe says.

“I said, ‘This is serious.’ He had the ability to get out, but they locked the door.” Joe asked his new cellmate: “Judge, are you afraid?”

This was something completely unprecedented. Lou had never spent a night in jail, much less with a prisoner, but after seeing Joe he knew he needed to help in some way.

Lou’s presence had an immediate effect on Joe. “It automatically brought me back to being a person,” Joe says. “I was overwhelmed. I really wanted to cry. And I didn’t feel alone.”

Sitting side by side in the jail cell, judge and veteran ate meatloaf and mashed potatoes and talked — about their families and jobs, television, and war. Around midnight, the judge put his mat on the ground.

“I said, ‘Judge if anything please sleep in the bunk. Let me take the ground,’” Joe says, but Lou insisted, “‘I got it.’” They chatted in the dark.

“Finally, Joe’s breathing got heavier and he got quieter, and then he started to snore,” Lou says. “That was when I felt good because I knew Joe would be OK.” The next morning, Lou drove Joe home before heading straight back to the courthouse.

“Joe was a good soldier and he’s a good man,” Lou says. “I wanted him to know I had his back. I didn’t want him to do this alone.”

“I’m a judge and I’ve seen evil,” Lou says, “but I see the humanity in people. Joe is a good man. Helping him helped me. I wanted him to know he isn’t alone.”

“When I walked out of the cell, it felt like a clean slate,” Joe says. “I was talking to one of the jailers. I’m like, ‘Have you ever seen that?’ He said, ‘No. Don’t disappoint him.’”

Joe says one of the hardest parts of coping with PTSD has always been trusting. He didn’t trust people anymore. Lou changed that.

“Just his presence alone shifted my whole mindset. When he walked in, that kind of brought the walls down and built this confidence in me, of trust in people.”