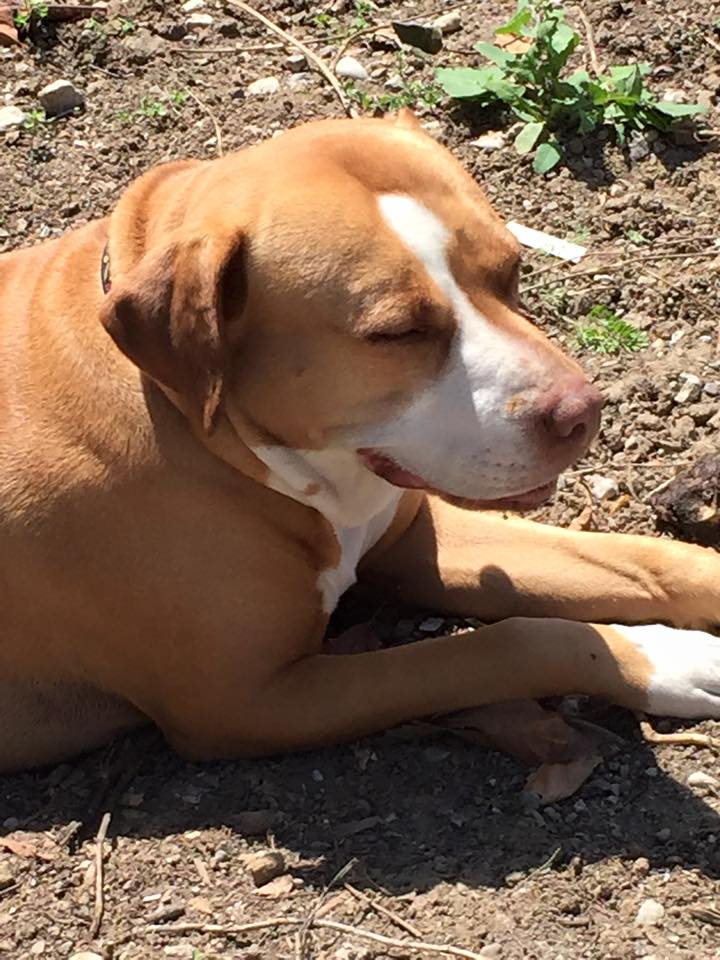 A man fell in love with a three-year-old pit bull named Merrill when he went into San Francisco’s Rocket Dog Rescue in search of a dog to adopt, but the shelter ran into an unexpected problem.

When it was time for the man to come and pick her up, Merrill would not leave her best friend behind.

In 2014, Rocket Dog Rescue received a sick pit bull and a senior Chihuahua who were adamant about staying together.

The volunteer-based shelter is dedicated to saving unwanted and abused dogs, and they regularly took in dogs that had a hard time getting adopted. Their ultimate goal is to prevent dogs from being euthanized.

Merrill and Taco, an eight-year-old Chihuahua, were given up and went to Rocket Dog Rescue together. Although little was known about their previous owners, one thing was clear: the pair of dogs were the best of friends.

Every time they were separated, they would cry. All of their time was spent together. Then, one day, the shelter staff got an insight as to just how strong their bond was.

Merrill was suffering from a severe uterine tract infection when the pair were brought in, and she had to undergo surgery to save her life.

During her procedure, Taco began to act extremely anxious and distraught. Nobody knew what was wrong with him. They brought him for tests too, fearing he had contracted a similar infection. But what was really happening was incredible.

The workers at the shelter soon realized that Taco wasn’t sick at all. He began to act restless and distraught only as Merrill went into the operating room.

When the surgery was over and Merrill was finally released, the workers had an extremely hard time isolating her. There was one big problem.

Merrill needed to be isolated so that she could heal faster but from the moment she awoke from the anesthetic, she cried out constantly. It was in reply to Taco who had been whining throughout her whole operation.

The workers debated over what they should do with them until they finally tried something.

The staff was amazed by the commitment these two dogs had to each other. Both Merrill and Taco had cried until Taco was allowed to be brought into the recovery area with Merrill. Taco was attentive and dedicated to Merrill for the duration of her stay in recovery.

After that, the little Chihuahua didn’t leave his best friend’s side. But the staff members at the shelter were concerned that this might be ultimately detrimental to the two dogs.

Giving Them A Chance

The shelter knew that dogs who come in pairs like this are much more difficult to adopt as many people aren’t ready to adopt two dogs at the same time.

So they decided to list Merrill and Taco separately on their website and hoped to find separate homes for each of them. Senior dogs are also harder to find homes for, so there was little interest in Taco. Merrill, on the other hand, was a different story.

As soon as a man came into the shelter one day looking to adopt a dog, he saw Merrill and decided that she was the one. Workers at the shelter were thrilled she had finally been chosen.

The man completed all the Rocket Dog Rescue paperwork, but when the day finally came for him to pick her up, something went terribly wrong.

The man arrived at the shelter with all his new dog toys and dog leads, excited to take Merrill home. Little did he know, Merrill didn’t feel the same way.

Merrill was led out of her cage, and Taco was left inside. When the man began to lead Merrill away, she began howling and howling, and she would not stop. Suddenly, she snapped.

Merril dug her paws into the ground, refusing to move as she whined as if she was in serious pain. The man had no idea what was going on.

The staff at the shelter however, knew exactly what was happening. It was the moment they were all afraid of and it would cost Merrill her home.

The staff at the shelter then told the man the story of Taco and Merrill, and how they were best friends and could not be separated since they arrived at their shelter.

The man felt a sudden pang of guilt. He realized that there was no way they should be separated. He agreed that it was best for them to stay together. But this wasn’t good news.

Unfortunately, the man could not adopt both Merrill and Taco as he only had room for one dog. He was certain that even though Taco was small, two dogs were just too much for him to handle.

He decided to adopt a different dog instead. That was when the shelter knew they had to change their strategy.

After the scene the dogs made, Rocket Dog Rescue staff were forced to come to the conclusion that it was best for Merrill and Taco to stay together.

They changed the listing on their website, from two separate dogs to a pair of dogs that could not be separated as it was deemed harmful to their well-being. It was a big gamble.

The shelter had only once or twice before managed to provide a pair of animals a home together. They knew they might have to wait a while but what other choice did they have?

When days passed into weeks, and weeks passed into months, the shelter got seriously worried that the pair might never find their forever home.

However, the shelter never gave up hope and continued to document their special relationship on their site in the hopes of catching someone’s attention.

As they continued to wait, a wonderful volunteer named Jodi saw their posts and decided she wanted to foster the pair while they waited for a forever home. It was just the beginning.

Their foster mom, Jodi also continued to post about their adorable relationship and often sent their pictures to the shelter, who would upload them to their site.

Their heartwarming story began to quickly gain attention and their loyalty towards each other wowed other dog lovers. It wasn’t long before the perfect opportunity came along and knocked at the door.

A family from San Jose fell in love with Merrill and Taco’s story when they saw the listing on the shelter’s website. They arranged a visit with Jodi to meet the two dogs, and then decided that they wanted to make them a part of their family.

When it came time for Taco and Merrill to go to their new home, they were thrilled to be going together. But it was not a happy ending… yet.

Taco suffered from asthma and dental disease, as most senior dogs do, and he had only 4 teeth. These health issues appeared at first to be minor problems until his new family took him to the vet a month after he and Merrill were adopted.

Then the family got the news, and the outlook did not look good.

Unless something was done soon, Taco would suffer impending heart failure. The medical evaluation had found that Taco’s heart was enlarged and there was fluid surrounding his lungs.

A specialist visit was scheduled, and he was immediately put on medication. The family braced for the worst, but tried to hope for the best.

Despite being on medication, Taco’s owners knew that his advanced age meant he might not recover. The family gave him a fighting chance anyway, and gave him lots of love and attention. Merrill also rallied to Taco’s side and didn’t leave her best friend for a minute.

Then, incredibly, Taco’s condition seemed to begin to improve.

Taco’s condition has since stabilized and his heart is no longer at risk. He has to take several medications for life, including anti-seizure drugs and steroids for his lungs.

He still has respiratory issues, but that doesn’t seem to stop the little Chihuahua from having fun with his human siblings, and his best friend Merrill.

Merrill loves running and rolling on the grass in the family’s yard. Being a young adult means that she is extremely energetic and active. But for Taco, she’s hard to keep up with so the kids carry him to wherever Merril is playing.

As time went by, the family began to uncover just how incredible their bond really was.

To the delight of everyone who followed their story posted initially by the shelter, the family decided to create social media accounts for the doggo’s and keep the internet updated with their daily lives.

Merrill loves running and rolling on the grass in the family’s yard. Being a young adult means that she is extremely energetic and active. Taco finds other ways to join in on the fun, even though he can’t quite keep up with her.

Taco carried to wherever Merrill is playing by the family’s children. Most of all, he and Merrill love spending every single day and night together and knowing that they will never be separated again.