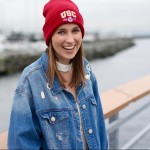 Caitlin Plummer
Caitlin is a freelance journalist and recent graduate of the University of Southern California, where she studied journalism and cinematic arts. Since moving to Los Angeles, her work has been featured in the Los Angeles Times, The Hollywood Reporter, MySpace and various USC publications. She is also currently a news apprentice at the Pasadena-based NPR affiliate KPCC.A native of the Pacific Northwest, she loves coffee, pine trees, oversized clothing and watching television almost as much as she loves analyzing it.Check out her Twitter @caitlinplummer – she’s funny, sometimes.
Top 5 Raunchy Christmas Party Games That Will Make Your Family Cringe
5 Places You Can Shop For Career Fashion Without Breaking Your Budget
Five Workouts That Also Make You Feel A Little Bit Sexy
Five LA Internet Coffee Shops Perfect for Productive Digital Nomads
The 10 Best Red Lipsticks You Can Wear For Any Occasion
20 of the Longest Celebrity Relationships That’ll Rekindle Your Faith In Love
10 Cheap and Easy Stress Relief Activities To Indulge in Anytime
5 Gorgeous Los Angeles Hikes You Have To See To Believe
Five Dating Apps You Have To Try If You’re Single (And Ready To Mingle)
10 Things You Probably Didn’t Know About Meghan Markle
10 Hair Trends To Freshen Up Your Look This Spring
10 Ways Meghan Markle and Prince Harry’s Wedding Will Be Different Than William and Kate’s
Next Page »