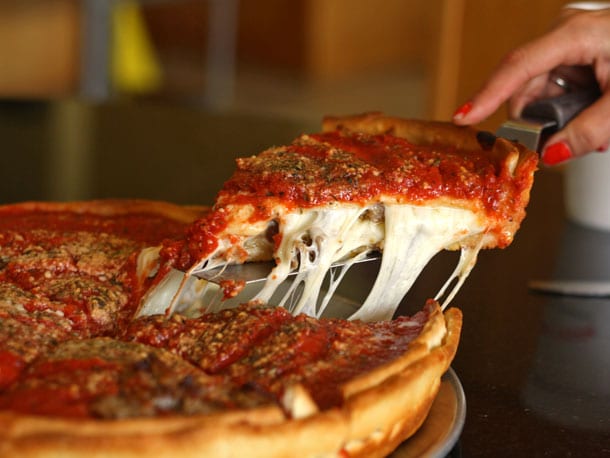 Pizza is one of the most popular foods in the United States. Whether it’s a quick answer to “What’s for dinner?” or a post-drinking midnight snack, pizza always seems to hit the spot. You can have it for lunch, dinner and, yes, sometimes breakfast. It’s great fresh out of the oven or even cold the next morning. And it’s one of few things in the frozen food aisle that you won’t feel guilty about bringing home.

Pizza has had a long history in the U.S. and dates back to the early 1900s when Italian immigrants came to America. While Lombardi’s in New York City opened in 1905, making it America’s first pizza place, the savory pies didn’t really take off until after World War II, when soldiers who fought in Italy brought back their cravings for a slice of the cheesy goodness. And now you can’t walk through any town or city without seeing at least one pizzeria.

Although we have to thank Naples for what we know as pizza today, the dish has taken on various forms throughout the years. And the U.S. is such a big country, a variety of different kinds of pizza started to take shape — depending on where you were. Pizza has become such a part of American food culture that February 9 is National Pizza Day. Instead of naming the deals and discounts for that day, we thought it would be good to give you a crash course on some of the country’s most beloved types of pizza. While there are so many ways you whip up a pie, here are Top 5’s favorite American pizza styles.

Yale University usually comes to mind when people think of New Haven, Conn. However, locals will quickly tell you that they’ve got the best pizza in town. And they’re not really just tooting their own horns, because Frank Pepe’s was named America’s best pizza in 2013.

But what, exactly, is a New Haven pie? Instead of being baked in a traditional wood-burning oven, New Haven pizzas – better known as apizza – rely on oil or coal ovens to cook them up. They aren’t perfect circles but have super-thin crusts that have a bit of bitterness to them due to the char from the oven. And to cut that sharp taste, chefs pile on the tomatoes and cheese. And if you want to eat like a true New Havener, you will want to to order a white clam pie with littleneck clams all over it. Between the bite of the crust and the sweet morsels of the shellfish, it’s a combination that might seem crazy but totally works.

If you’re ever in New Haven, check out these places to sample one of these pizzas.

Frank Pepe’s
Where: There are a few locations throughout Connecticut and one in New York and Massachusetts. But the main spot is at 157 Wooster S., New Haven, CT 06511.

ATTENTION @patriots fans! Stop by our Chestnut Hill location today wearing your #Pats fan gear and get $5 off all take-out orders over $25 during lunch and dinner hours!

When in New Haven @yaleuniversity, first stop is Sally’s #questlovesfood

From music to overall vibe, there are many debates about who’s better — the East Coast and the West. But with New York-style pizzas being one of the more favorable types of pies, no one would even consider California to come up with anything that could stack up. But California Pizza Kitchen kind of changed the game on that one. Although it’s a chain, this place opened people’s minds to what a pizza in California could be like.

And if you’re still wondering what “California pizza” means, here are some of its distinct characteristics. The crust is normally a hand-tossed one. However when it comes to toppings, anything goes. Seriously, you can absolutely put anything you want on it. Whether you crave some BBQ chicken or loads of shrimp and avocado, California-style pizza thrives on the toppings it uses.

If you’re looking for something a little different in California that’s not your typical CPK, you may want to try out these places that give American pizza styles a West Coast flavor.

Spago
Where: 176 N. Canon Dr, Beverly Hills, CA 90210. There are also locations in Istanbul, Maui, Las Vegas and Singapore
What to try: Hands down, you need to try the pizza with house-cured smoked salmon, red onion, dill crème fraiche.

A #California classic for 35 years and counting…

Pizzanista
Where: 2019 E. 7th Street, Los Angeles, CA 90021 and 1837 E. 7th Street, Long Beach, CA 90813
What to try: Looking at the menu, there aren’t too many crazy things on it when it comes to pies, though there’s a mac and cheese pizza on the weekends. But they do offer a pretty sizeable selection of vegan pizzas that includes one with “pepperoni.”

Get our infamous #macandcheesepizza every Sunday at @pizzanista in #DTLA #DTLAartsdistrict & Long Beach #THELBC This #pizzanista specialty is available #vegan, by the #slice & or whole pie, for dine in, take out or delivery. Spice it up with some jalapeño peppers🌶. We look forward to being with you and serving you! ✌🏼❤🍕#skateorpie #phonypizzamaniahasbittenthedust

Detroit is known for two things: cars and Coney dogs. But it’s also known for some great pizza. Some people may confuse the Detroit-style pie with a Sicilian or Grandma pizza because of its rectangular shape. But the mozzarella and Brick cheese that line the pizza pan form a nice crust on the edge and a nice surprise for your belly.

Looking for some Detroit-style pies? Check these Motor City restaurants and one wild-card spot.

Buddy’s
Where: There are various locations around Greater Detroit. See them all here.

Chicago is one of America’s big culinary capitals. And if there’s one thing that the Windy City is known for, it’s deep-dish pizza. Unlike slender slices you can easily eat with your hands, deep-dish pizza is a fork-and-knife situation. Then there’s the fact that the ingredients are piled up differently. Instead of the sauce at the bottom, the toppings are normally put at the bottom followed by the cheese and then topped off with sauce, which makes it the type of meal you sit down to eat. And let’s not forget about the fact that this is so hearty you’ll probably be good after one piece.

If you’re in Chicago and don’t want to go to the birthplace of the deep dish, try out these other restaurants.

If you like cheese bread, you’ll love stuffed pizza at Art of Pizza. Also tried slice of pan; not sure how they garnered #1 accolades. #ChicagoPizzaQuestThick

When people think of pizza in America, New York City always seems to be the focus. Granted, Grimaldi’s was the first pizzeria in the U.S., so New Yorkers tend to hold on to that legacy very tightly. But with a pizza joint on every other corner and even the dollar slices tasting pretty good, it’s safe to say that New York knows how to make a good slice. The perfect NYC slice has a thin, crispy crust that snaps when you fold it in half before putting it in your mouth.

While everyone has their favorite place to get pizza in New York, here are two spots that you shouldn’t miss as well as a pizzeria in Texas that has done right by the Big Apple.

Do you think you can find the Di Fara slice in this pizza medley? Beautiful 📷 by Indulgent Eats from last year’s Slice Out Hunger. Speaking of which—coming to this event today? Don’t forget to take awesome pic and share them with us! #difara #nycpizza