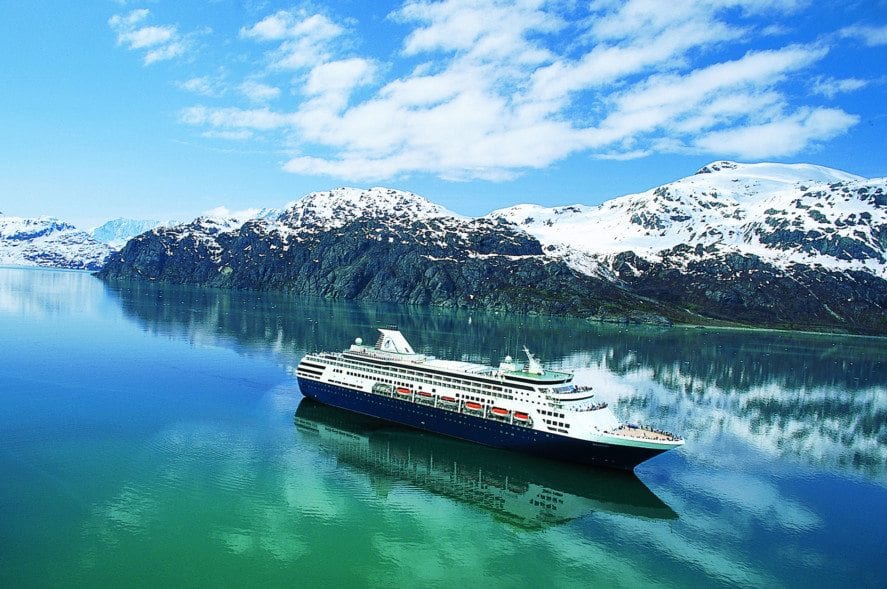 Gearing up for a summer trip to the Last Frontier? Summer is the season to visit Alaska, and these five Alaska cruise line itineraries will have you packing your bags and raring to go. (Just be sure to remember that down jacket – it still gets chilly, even in July.)

This seven-day inside passage cruise is perfect for the person who wants to get the basic experienceof coastal Alaska. As we’ll discuss later on, most of Alaska is inland, and some Alaska cruise lines have created special “land and sea” tours to address that, but this Princess tour just covers all the stops you would expect to cover on the inside passage.

You’ll depart from Vancouver, British Columbia, and spend your first day and a half at sea. Your first stop will be Juneau on Day 3. Juneau is Alaska’s state capital as well as the state’s third-largest city. Nestled in the mountains, Juneau is inaccessible by roads, so all traffic is by boat or plane only.

Mendenhall Glacier is a popular place for visitors to experience, and if you’re one who’s more for indoor fun, the Alaska State Museum is a treat as well. If you’re hungry, Deckhand Dave’s is an unassuming but highly popular spot to stop.

Overnight, you’ll sail from Juneau to Skagway. Skagway is a town from the Gold Rush era, and though it was once a hub for ambitious prospectors, now the town’s population hovers around 1,000 year-round residents. I would recommend the Bennett Train Journey on the White Pass Rail. Any opportunity to ride a train in Alaska is an easy “yes,” in my book. Thereis just so much amazing scenery to take in, and the trains often cut a swath right through the middle of the most bustling areas of forest.

The next day, you’ll take a scenic cruise through Glacier Bay National Park. Park rangers will share their knowledge of the area and answer any questions you may have as you bob through the park’s pristine waters. Glaciers are amazing to see in person, and I urge you never to pass up an opportunity to see one.

Your last stop before returning to Vancouver is Ketchikan. Ketchikan, like many stops along Southeast Alaska and the Inside Passage, is typically a fairly rainy city. Remember to pack your favorite raincoat for bustling around any of these destinations. I would recommend the Bering Sea Crab Fisherman’s Tour to get a taste of the commercial fishing lifestyle that sustains many Alaskans. If you’re tired of boats and want to rest up on shore, try the Alaska Fish House to fuel up before your return on Vancouver.

You’ll be cruising on the Island Princess, the Coral Princess or the Golden Princess. All feature at least 2,000 lower berths and boast at least 895 crew members. Cruises start from $849.

Alaska has beautiful coastlines crawling with seals, sea otters, sea lions and even whales, but if you don’t go inland at all, you’ll miss one of the most exciting adventures Alaska has to offer: Denali National Park and Preserve.

This journey on Holland America’s Denali line will take you from Vancouver, B.C., through Southeast Alaska before disembarking near Anchorage. You will then take the scenic McKinley Explorer up to Denali National Park and Preserve, where you can stay up to three nights. To conclude your journey, you’ll travel farther north to the great city of Fairbanks. These cruises run in the summer, so Fairbanks will be home to soaring temperatures and the midnight sun. When you’re ready to head home, Fairbanks boasts an international airport that will get you wherever you want to go.

Denali National Park is one of the most beautiful places in the state of Alaska. The mountains towering up above you and the Nenana River crashing beneath you create a unique symphony of visual and auditory bliss – and that’s not to mention the activities you can do there. From back-country ATV adventures to Denali peak flightseeing to this outfit that will take you on a four-hour Jeep tour of the scenic Denali Highway, I would recommend staying all three nights available in the park so you can experience everything it has to offer.

Next, you’ll come to Fairbanks. Like I mentioned, Fairbanks in the summer is hot, sunny and bathed in perpetual daylight. You’ll have to come back in the winter to see the Northern Lights, but in the meantime, the rock lake at Chena Hot Springs is magical all year round. Once you get done soaking, there’s even an ice museum to cool off in. The hot springs are a little out of town, so once you get back into Fairbanks proper, I would recommend dinner and drinks at the Pump House before an after-dinner stroll around Pioneer Park.

If the Princess Inside Passage tour looks too basic for your tastes, you might really enjoy Holland America’s 14-day Great Alaskan Explorer Cruise. It starts and ends in Seattle, so you can fly in and out of the same airport on your way to and from the cruise, which is always a bonus. Seattle is a great city to spend a couple days in either before or after your Alaska cruise, and though this is an article about Alaska, I will recommend one Seattle experience, and that is Chihuly Garden and Glass underneath the Space Needle. It is absolutely beautiful and a complete can’t-miss.

I’m going to skip ahead to Day 6, because your first two stops are Ketchikan and Juneau, which I’ve already covered. On Day 6, though, you’ll dock at Icy Strait Point. Icy Strait Point is a destination near the village of Hoonah. Some of the cruise add-ons you can enjoy here are whale-watching tours, ATV expeditions, fishing trips or a ride on the Tongass Rain Forest tram.

On Day 8, you’ll have a chance to explore Anchorage. Anchorage is Alaska’s biggest city and is located just above the scenic Kenai Peninsula. It is home to a fascinating museum; a zoo designed specifically for cold-climate animals; and a bustling downtown with a mall, nearby walking trails and a plethora of delectable restaurants.

Day 9 brings you to the city ofHomer, which is located at the tip of the Kenai Peninsula. Homer is the halibut fishing capital of the world and you cannot complete a day trip there without reeling in a big one. After all that hard work, unwind at the Salty Dawg Saloon. If you’re more interested in going into town, both the Pratt Museum and the Islands and Ocean Visitor Center are excellent places to learn more about the community of Homer and the fascinating Kachemak Bay.

From Homer, it is just a quick overnight jaunt to the city of Kodiak. Kodiak is located on Kodiak Island, which is famous worldwide for the number of bears that call it home. If you’re not scouting for grizzlies, try the sushi at the Old Powerhouse restaurant – grab a seat with a world-class view of the channel – or have a spot of coffee at Monk’s Rock Coffeehouse and Bookstore.

We’ll talk about Sitka and Hubbard Glacier in the next section, so just know that you’ll stop by both on Days 12 and 13. From there, you have one day at sea, one stop in Victoria, B.C., and then a swift arrival in the bustling city of Seattle, from which you departed.

This Alaska cruise is similar to the Princess Inside Passage cruise I mentioned earlier, but with a focus on Hubbard Glacier and a stop in Sitka. You’ll both depart and arrive from Vancouver, B.C. If either of those stops are on your bucket list, but you don’t have the time and cash to invest in a longer cruise like Holland’s Great Alaskan Explorer, Celebrity’s Alaska Hubbard Glacier Cruise is the Alaska cruise for you.

After departing Vancouver and spending over a full day at sea, you’ll dock in the town of Sitka. Sitka, like Kodiak, is a small Alaskantown with a strong Russian influence. Visit St. Michael’s Cathedral for a taste of that Russian history, or check out the Alaska Raptor Center to visit with some birds of prey. As for food, locals love the fare at Ludvig’s Bistro.

Hubbard Glacier is a huge glacier located off the coast of Yakutat, which is 200 miles northwest of Juneau. At the point where it meets the ocean, Hubbard Glacier is more than six miles wide. It can be hard to reach at certain times in the season, depending on the amount of ice that has calved off the face of the glacier, so aim for mid-season cruise dates if you’re interested in getting as close as possible to the glacier’s face.

You’ll stop by both Juneau and Ketchikan before wrapping up your eight-day cruise back in Vancouver. I discussed both Juneau and Ketchikan on the Princess Inside Passage cruise, so I won’t go back into them now. Just know that these Alaska cruises often overlap quite a bit, and you’ll have to choose your route based on specific preferences and bucket list items that you have.

1.) Princess Northbound Voyage of the Glaciers

As I mentioned earlier, these cruises have a lot of overlap. I think each of these Alaska cruises has a different flavor to them, and each one will bring you one or two locations that other cruises won’t, but there’s often a lot of similarities. This is because most of Alaska isn’t actually coastal.

Keeping that in mind, this Princess cruise stops in many of the familiar haunts – departing Vancouver and stopping in Ketchikan, Juneau, Skagway and Glacier Bay National Park – with one major departure: the town of Whittier.

Whittier is the endpoint of this seven-day Alaska cruise and is an incredibly interesting destination. With a population of only a few hundred, most members of this community live together in the pink Begich Towers building. Begich Towers and the abandoned Buckner Building are both WWII relics and available to view from the outside. Whittier also boasts an amazing view of Prince William Sound. You’ll have to catch a ride to Anchorage, about 58 miles northwest, and to do so you’ll drive through the magnificent Anton Anderson Memorial Tunnel. The Anton Anderson tunnel is the longest highway tunnel in North America, measuring 2.5 miles, and the first designed for -40 F temperatures.

You’ll be sailing on any one of the numerous Princess ships, depending on your preference, all of which are fine vessels. Cruises start from $457.

Cruising out of or into Vancouver? Check out our post: Top 5 Questions to Make Your Next Trip to Canada Unforgettable