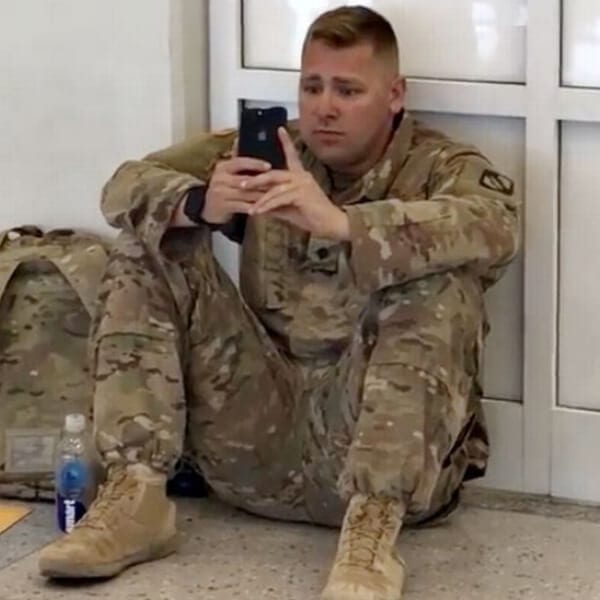 It was just another day with people going about their business at Dallas-Fort Worth International Airport. No one took notice of a man sitting on the floor, his back against the wall, staring intently at his cell phone.

He was dressed in uniform identifying him as a soldier and, surprisingly, while he sat quietly tears began streaming down his face. Concerned, some airport staff began to approach him when out of the blue someone yelled: “Don’t let him board the flight!” 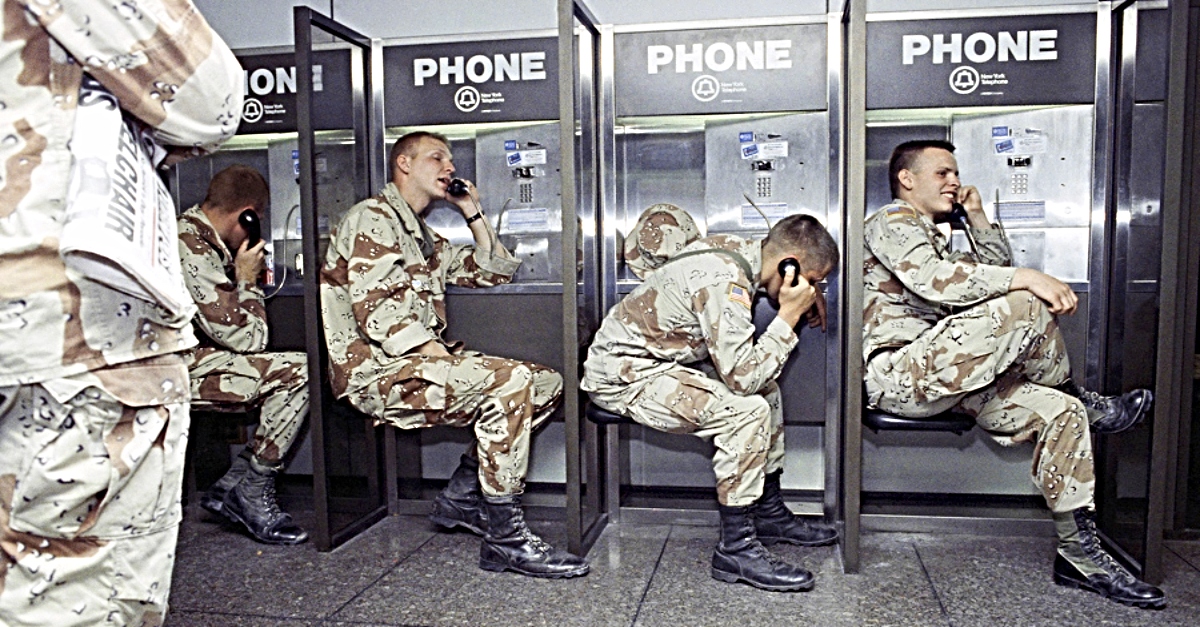 When Brooks and Haley met it was like something out of a movie scene. Sparks flew when their eyes locked together and nothing could keep them apart… Nothing except Brooks’dream of becoming a combat soldier in the U.S military.

Blinded by their love and emboldened by youth, Brooks enlisted with Haley’s full support. Two years later Brooks got down on one knee and asked Haley to be his wife but a surprise loomed in their future. 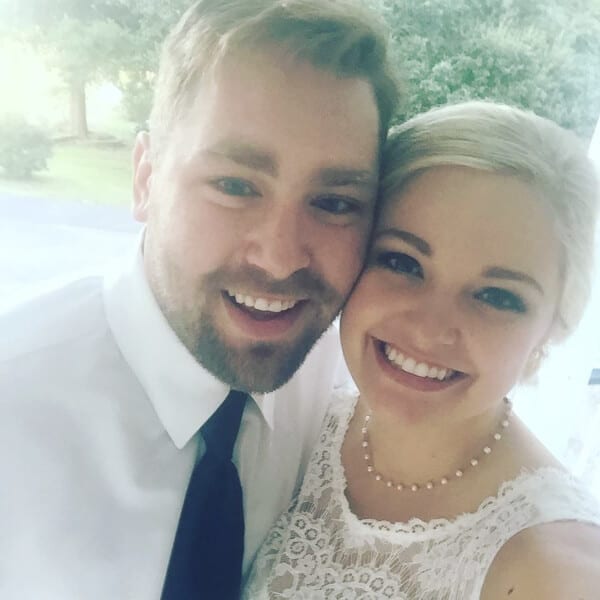 Brooks couldn’t tell yet but Haley had a secret during the wedding. She was already pregnant with their baby. The love birds couldn’t have been happier at the thought of bringing home a baby, but hard times were ahead for both of them.

It wasn’t long before Brooks got the news that he was due to begin training very soon, but while he was still around he went to every doctor’s appointment and ultrasound. Then, they got the news that they would be having a new baby girl. 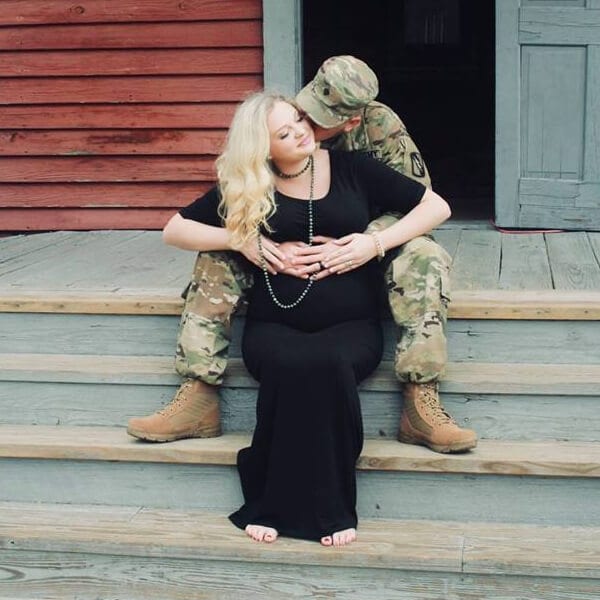 It’s the most common complaint of any soldier that saying goodbye to friends and family is the most difficult part of the job. The same was true for Brooks as he left for training in Fort Bliss, Texas.

That was only the beginning of his leave too — shortly after completing training he was immediately assigned a nine-month deployment in Kuwait. Not a day passed when he didn’t think about his wife and growing child and if he’d ever see them again. 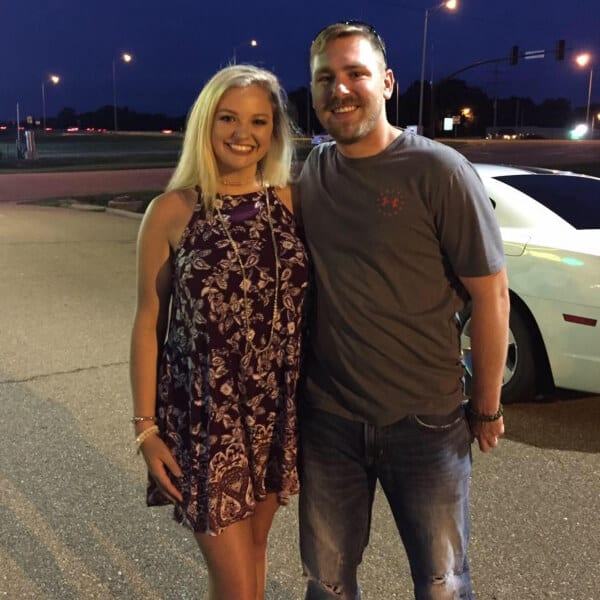 Sacrifice is in a soldier’s blood. He would sacrifice the time with his new wife to fight for his country. The day ultimately came for Brooks to leave his wife behind and it was the hardest thing he had ever done in his whole life. The only thing that kept him from staying was his dream of becoming a U.S. soldier. Before he left they decided to name their baby girl while they were still together.

Brooks said goodbye to his then seven-month pregnant wife and soon-to-be-born Millie, and he left to begin his new military journey. 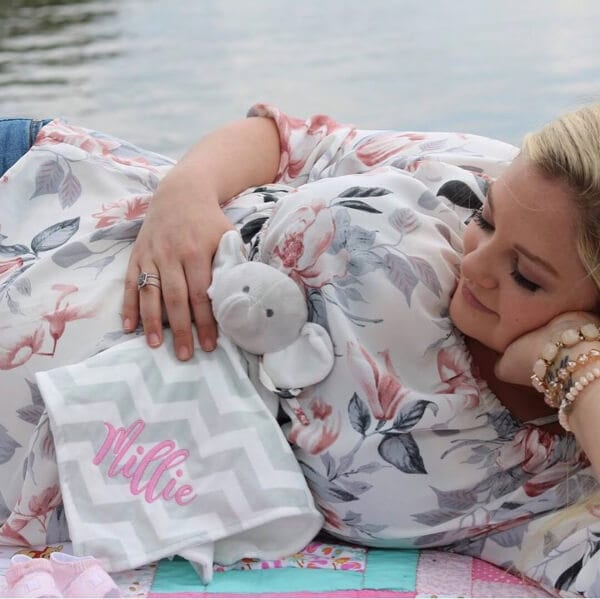 Haley was having an amazing pregnancy. So far she hadn’t suffered much morning sickness and she was full of energy. It was a great time for both parents-to-be. The only reason for concern was slightly high blood pressure. But they weren’t about to let that one small fact bring them down.

Brooks and the rest of the Lindsey family were eagerly awaiting Millie’s arrival into the world and the due date was rapidly approaching. The one thing that Haley still held hope for was that Brooks would be able to join her for the birth. But the odds were not in their favor. 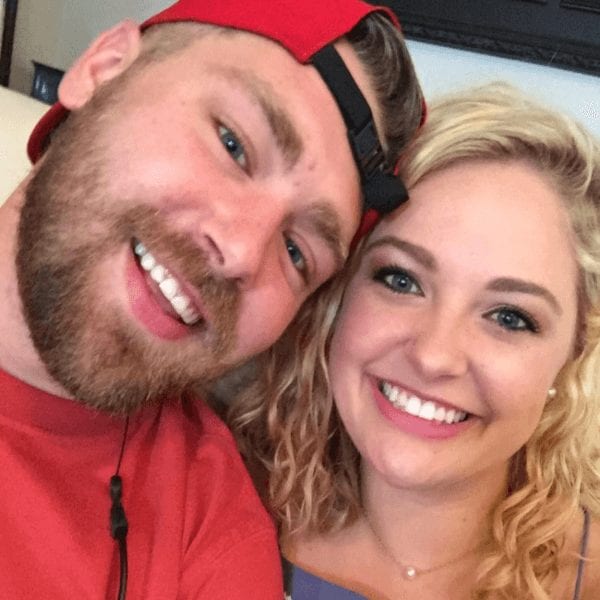 There were so many hoops to jump through to try to get Brooks cleared to come home for the birth. The rules were firmly set in place and facts were simply that men often did not get approval to leave their post to join the birth experience back home.

The Red Cross only approves this in particular situations when the pregnant woman is in distress. They didn’t fall into that category so they had to come up with a plan. 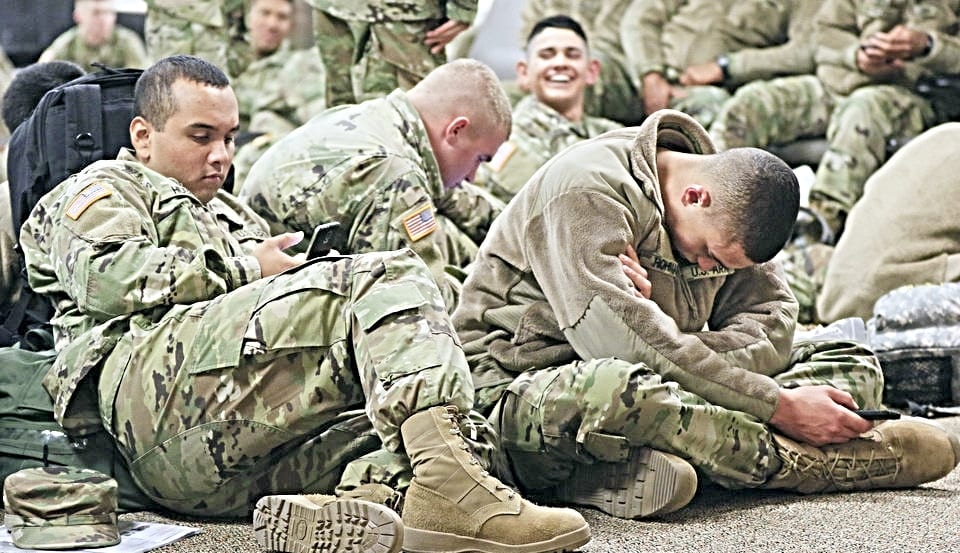 The only good thing about missing such a life-altering event is that everything is well and good and there is no need to worry.
Since soldiers can’t come home unless the woman is in distress, it’s meant to seem like a blessing that everyone is well. Sure, they would love to be there with the mother of their child, but they should also feel blessed that nothing is wrong with the pregnancy.

Since Haley only had mildly high blood pressure, it didn’t look like Brooke would be able to come home at all. But when Haley showed up for what appeared to be a routine checkup, everything changed in a moment. 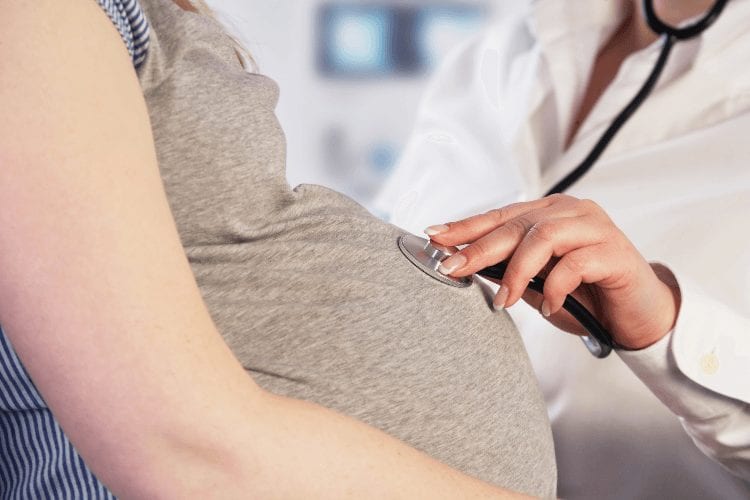 Haley’s blood pressure was alarmingly high at her next doctor’s appointment. He was concerned that there could be a complication with baby Millie. Haley went instructed to go home and rest while the doctor ran a full battery of tests. What would the results show?

Haley suddenly realized she could use her Brooks support. Concerns over the baby left her feeling helpless and perhaps now they would approve his return. And then she got a terrifying phone call. 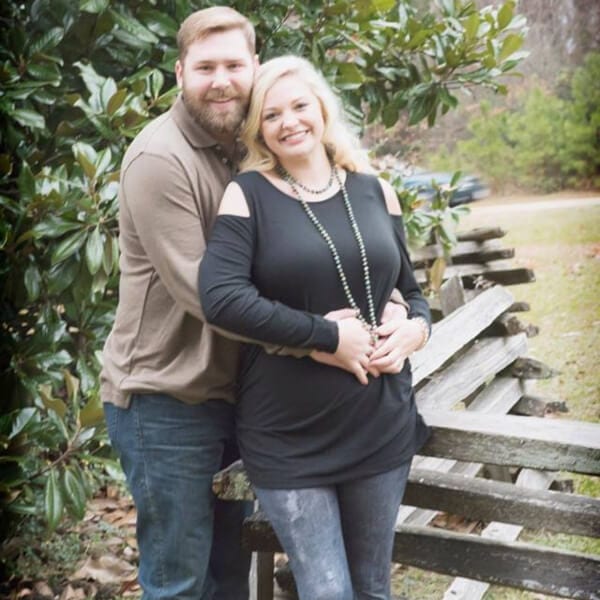 When her phone began to ring she was almost too scared to answer, but concern or Millie make her click the answer button. It wasn’t good news. The doctor told her everything she had been worrying about. Her high blood pressure was affecting her internal organs. But even more importantly, the situation could also affect the health of the baby.

The doctor made the decision. The health risk or both mother and child were too great. They were forced to take action immediately. 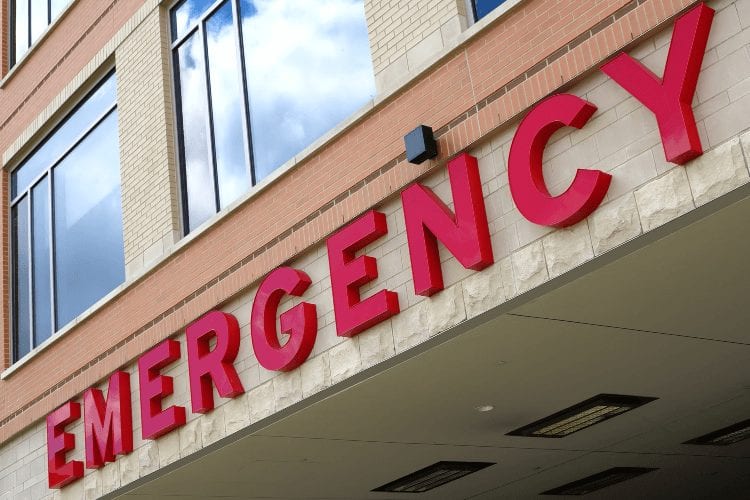 Haley was rushed to the hospital within the hour for round the clock observation. The doctor decided that they couldn’t take any chances and that they had to induce labor. It was such a turn around that the change in plan left Haley reeling.

Thank goodness she had the presence of mind to let Brooks know the situation before she left. Optimistically, Brooks was excited. It was his chance to be there with her for the birth of their firstborn child. 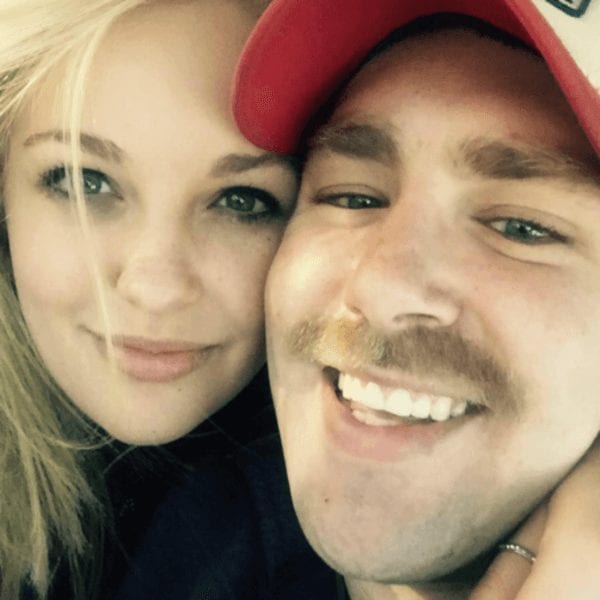 Now the hoops to jump through. In amongst the crush of emotions, there was a lot to do. Haley had to inform the Red Cross about her change in condition in order to get Brooks to leave approved. She had to provide confirmation from her doctor, which she did as soon as she arrived at the hospital.

Now that he was permitted to join his family, Brooks had to deal with the uncertainty of his wife and child’s health. He didn’t know what to expect from the coming days. 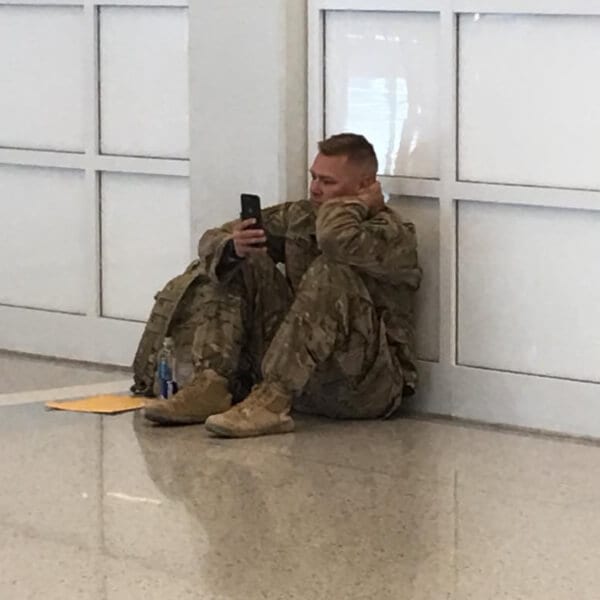 Luckily Brooks hadn’t yet left or Kuwait and was relatively close. All he needed was the first flight out of there. But there was trouble at the connecting flight that no one could have predicted. When he arrived at the airport in El Paso, he found out that he would need to have a layover in Dallas, all the flights were full.

He was forced to wait for the next available flight, which was only at 10:00 am the next day. He felt helpless and stranded, but all he could do was sit it out and hope against hope that Haley could wait for him. 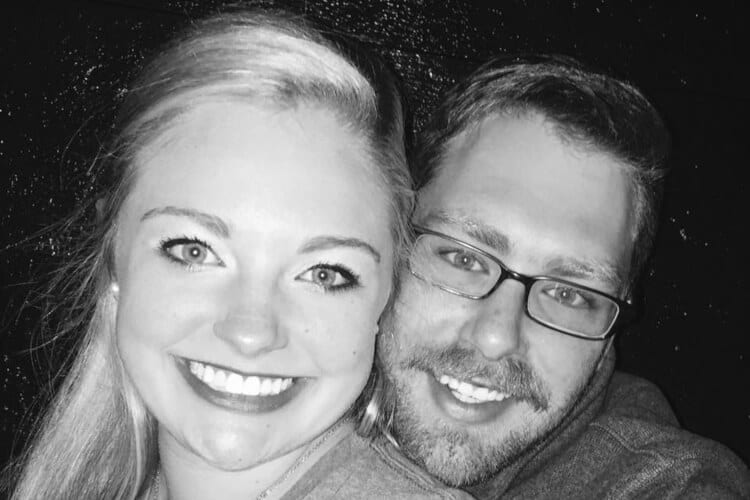 Brooks wasn’t going to make it back for the birth of his baby but the couple had another idea up their sleeve. As the family realized Brooks would be unable to make it in time, Teresa, Brooks’ mom, decided to pull out her phone and begin recording a live feed of the birth. Brooks, who was still sitting in the airport in Dallas, was now able to witness the birth of their daughter.

While he would have loved to be there with his wife, to support her and see the baby in person, this was the next best thing.

A Long Way From Home 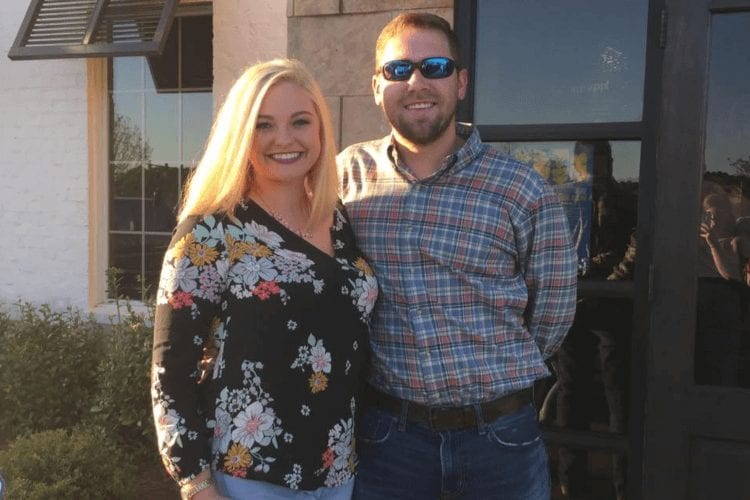 As if on cue Haley’s water broke, and the labor began progressing but Brooks was still stuck in El Paso. He struggled not to run through security and right up to his boarding gate. After boarding, he finally felt like he was on his way to his wife, but he was still a long way from home.

The feeling of helplessness only grew as he sat still in the tiny airplane seat, not knowing what was happening down below. 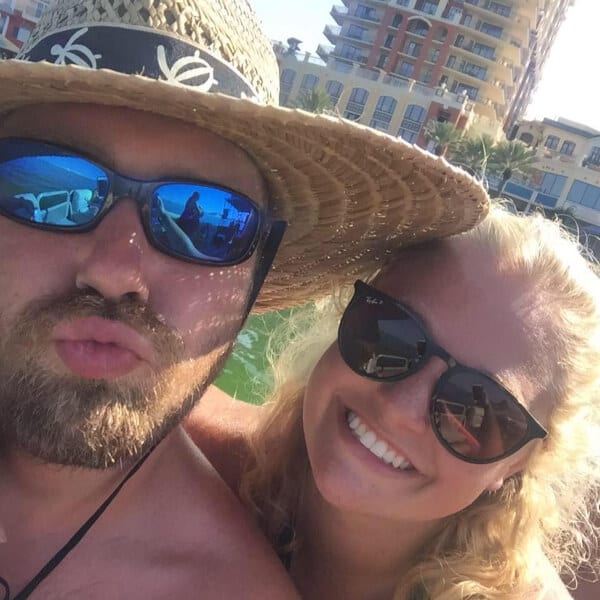 Finally, he made it to Dallas and he all but sprinted to his connecting flight back home. But there was bad news waiting for him when he got there. His flight was delayed by two hours.

Getting to Haley while still in labor was quickly slipping away from him. The doctor told Haley that birth was happening. Right now! 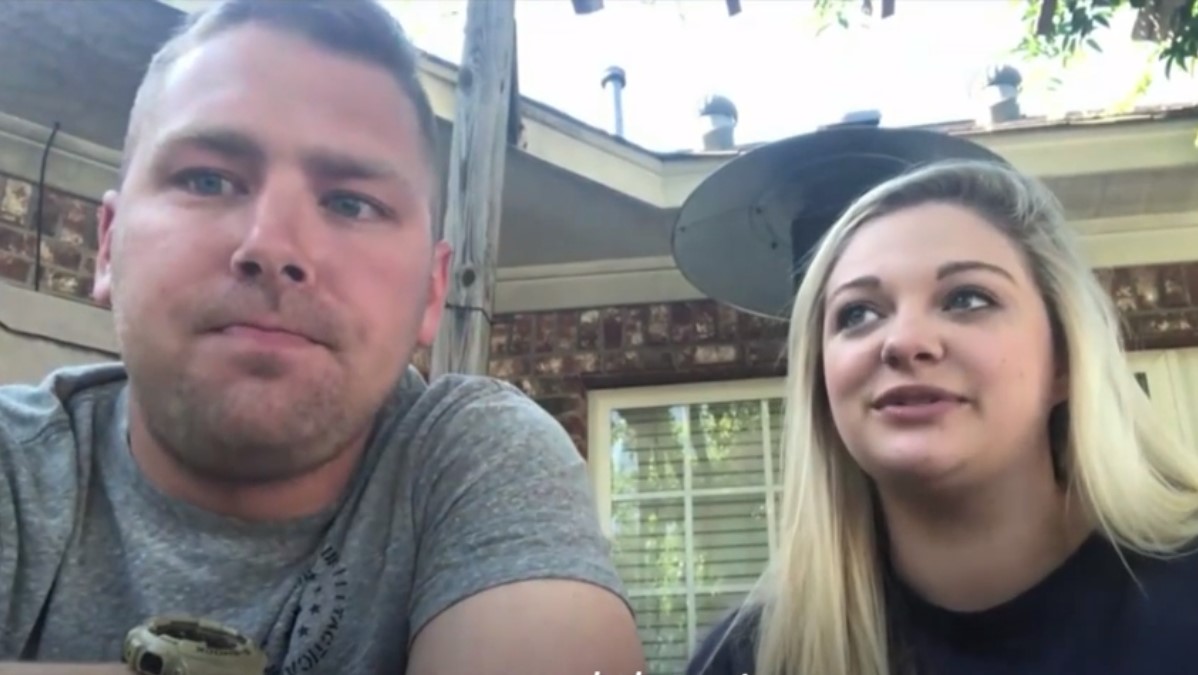 Holding the small screen in both hands, Brooks spoke reassuring words to Haley over long-distance. He cheered her on as she progressed through the labor, continually telling her how great she was doing.

The flight called to start boarding, but Brooks was glued to his phone screen. All of a sudden he began to cry. It was all too much to keep inside. It was then that airport security approached him. 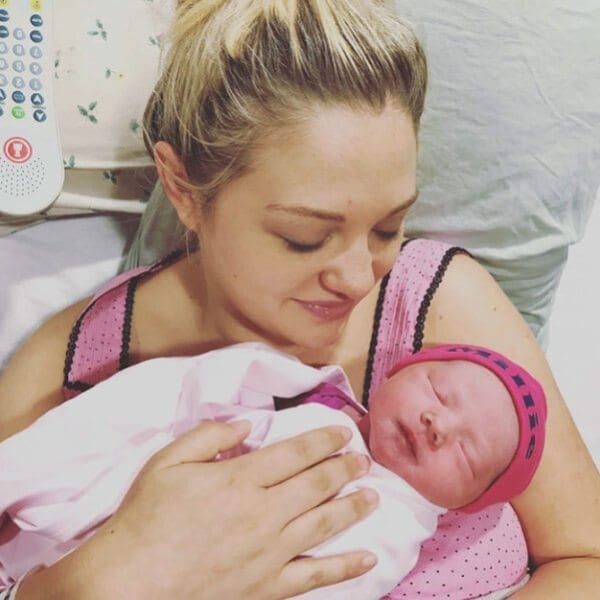 Brooks had missed the fact that they were calling the passengers to board the plane. Airport security urged him to board, and he finally agreed just as she was beginning to crown. As word spread, other passengers attempted to delay the flight, to make sure Brooks would be able to witness the birth, even asking the flight crew to comply with their requests.

A Blessing In Disguise 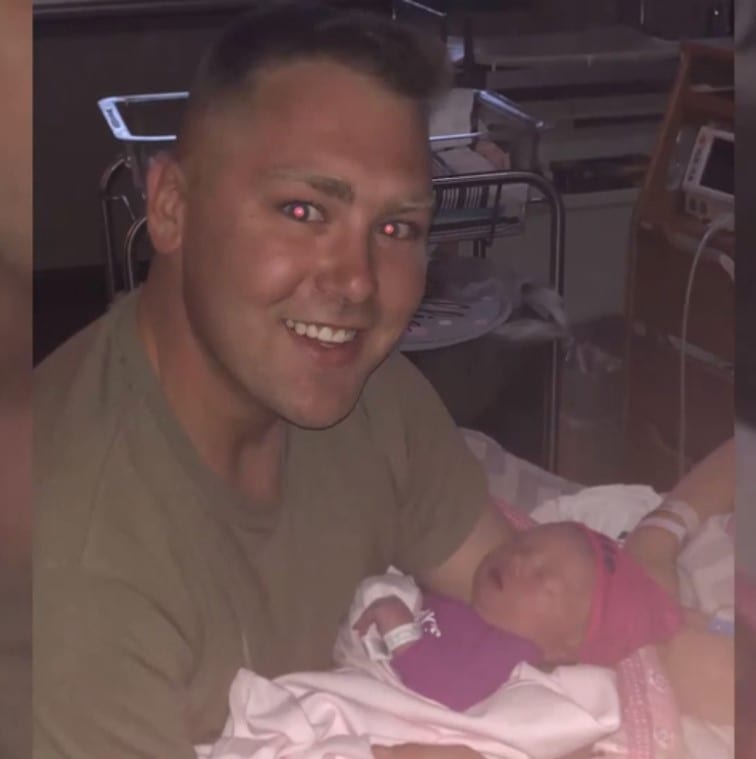 Baby Millie finally made it out to the world and there was a whole crowd ready to welcome her. Everyone celebrated in that beautiful moment when they heard her cry for the first time. It was an incredibly special moment to see all these strangers so happy for Brooks.

What had initially seemed like an obstacle resulted in him being able to witness the birth of his baby girl.

Everyone Is Doing Great 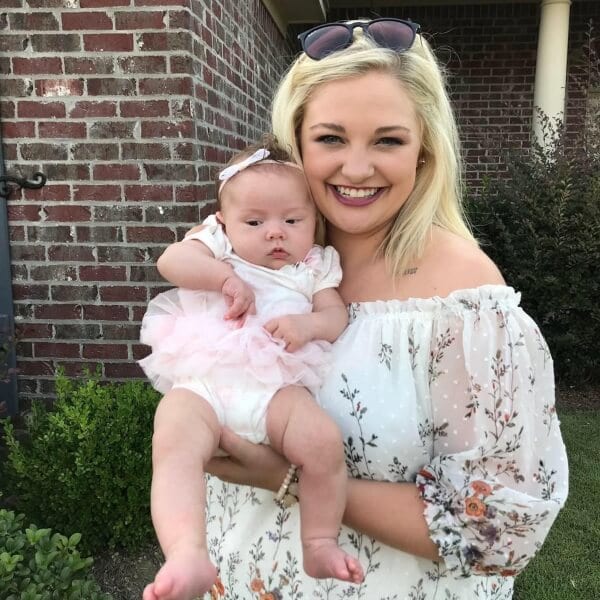 Like any other birth, the most important thing is the health of the baby and the mother. Both Haley and baby Millie were feeling great, as Haley’s blood pressure quickly began to stabilized following the birth. At birth, Millie weighed a healthy 7 pounds and 6 ounces.

And knowing that Brooks was on his way made everything that much better. The way this story unfolded is just more proof that everything happens for a reason.

He Finally Makes It 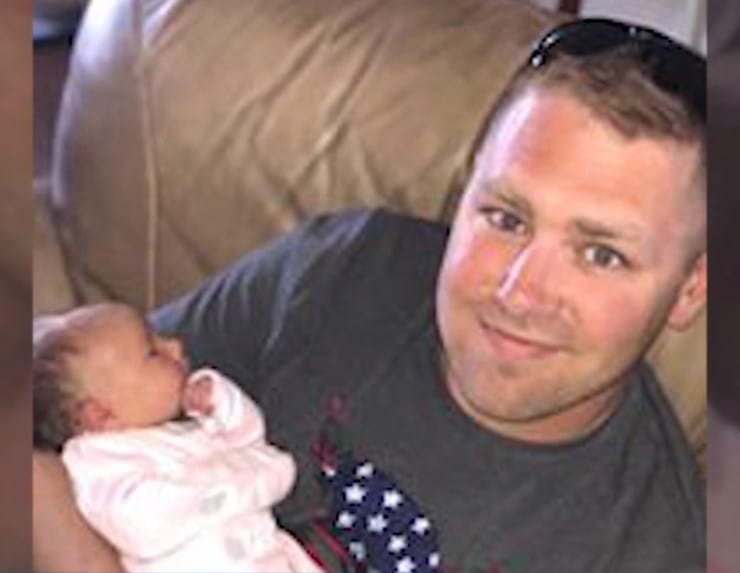 Needless to say, the moment Brooks finally made it to the hospital was incredibly special. He asked everyone in the room to leave so that he could have his special moment with his family. He finally got to meet his new daughter Millie.

As he held her in his arms, he said: “She is perfect.” Knowing he only had four days to be there, Brooks swiftly adapted to dad-life, as he woke up in the middle of the night, changed diapers, and held her for as long as he could. 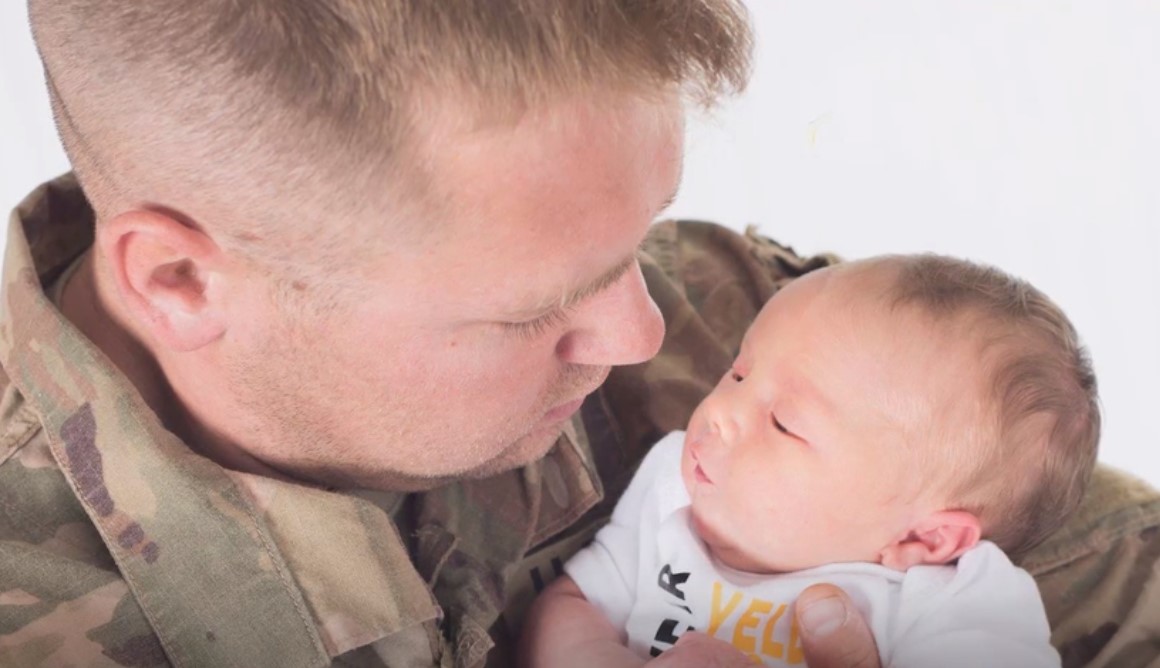 Being a soldier is no simple task. They protect us all on a daily basis, often making sacrifices most of us could not imagine. After the four days came to an end, Brooks said goodbye to his family and headed back to Texas to resume his training.

And as painful as it must have been to part ways at the time, he knew he had to chase his goals of being the best soldier he could be. 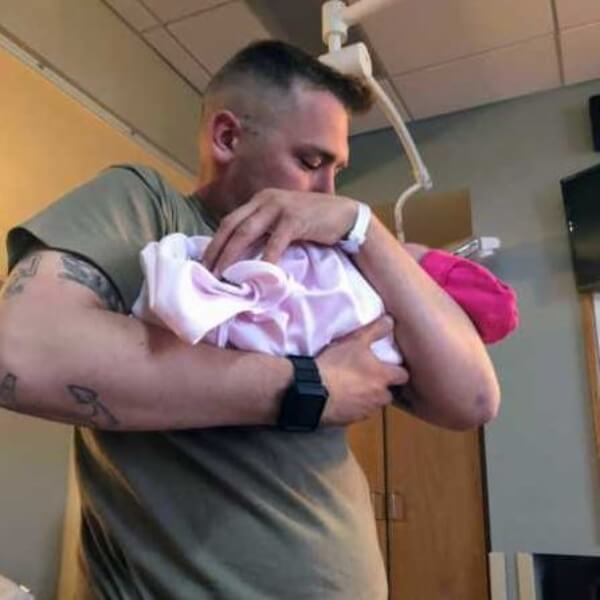 When people think of our troops, they immediately get a feeling of pride and respect. These are the men and women without whom this country would not exist. Beyond the risk of being in hostile territory, they are forced to deal with the hardships of being away from their loved ones.

Brooks Lindsey is the perfect example of what it means to be a soldier. A man is willing to make sacrifices for the better good of his family and country.