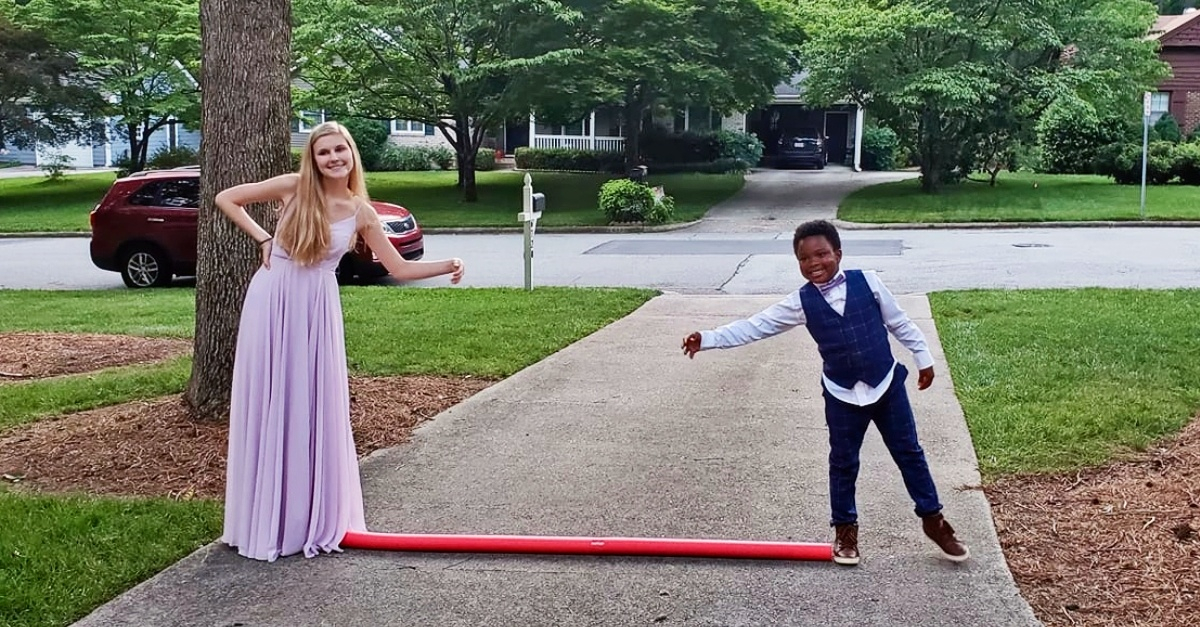 He hadn’t stopped talking about her all week.

But when he marched into the kitchen and handed his mom a piece of paper, she knew he was serious. He wasn’t going to budge. He was going to ask the girl to prom – but the “why” would be a story that would touch the world.

While adoption isn’t usually the first thing on a couple’s mind, for Elissa Rogers, she was certain that it was the right path for her and her husband.

And from the first moment she set eye little Curtis, she knew he had to become part of their family. There was just an indescribable spark about him.

As the years passed, and Curtis blossomed into a vibrant young man, Elissa wondered how much of his personality and behavior came from their parenting versus an astounding, natural blessing.

However, when her job changed and she couldn’t be with him after school, there was a monumental change she had to make. One she wasn’t looking forward to at all.

It broke her heart to spend time away from her son, but there was just no getting around it. They had to hire a nanny.

It seemed like forever – countless agencies and interviews – but eventually they found a decent match in a young girl named Rachel.

She would pick Curtis up after school, take him to his piano lessons, and then take him home to help him with his homework.

Elissa grinned at the puppy love her son had for the blonde high school student with a smile as bright at the sun. It was always “Rachel this” or “Rachel that.” However, after about a year, something changed.

The normal bright smile he had when he talked about her turned a little sad.

When Elissa asked why he had such a large frown, he sighed and said, “Rachel’s prom.” He proceeded to tell a story that dropped a bomb on Elissa’s heart. He wanted to go with her, but she couldn’t take him. He had been wracking his brains for weeks on how to make it happen.

Elissa felt tears form in the corner of her eyes – her son’s sadness was clear.

“Why don’t you get her a corsage?” she suggested. It would be a lovely gesture. But was like a huge light bulb had gone off in Curtis’ head. His eyes went wide, and he grabbed a paper and pen. After an hour, he proudly came back, and explained his elaborate plan.

There was no question as to what to do next. She would have to lend a hand. But first, she needed to set up her camera. And after three days of intense preparation, Curtis pulled out his large sign, jumped in the van, and vibrated with excitement.

The surprise was simple.

Curtis waited outside Rachel’s school until he saw her round the corner. He jumped as high as he could and waved to get her attention. As soon as they locked eyes, he held up his homemade sign. The girl’s reaction was everything they had hoped for.

But what was Curtis’ elaborate plan?

Well, he was obviously close to Rachel, so when she mentioned her prom had been cancelled due to the spread of the virus, her sadness became his. His sign read, “Will you go to prom with me?” But that wasn’t the end of it.

It wasn’t just a heartfelt invitation.

Elissa’s precious boy had gone as far as to pick out a nice suit, ask her to put on the dress she had planned on wearing and come to their house. That was phase one. Phase two was even better.

With the help of his parents Curtis set up a long table in the back yard and arranged a dinner with all his nanny’s favorite food.

Next was dancing. And even with social distancing, Elissa little man had conquered the separation with flying colors. He had carefully measured and laid down string that morning and got a pool tube that was the right length.

He beamed a huge smile at Rachel, pressed play on his iPad and streamed music he knew she would like. All they had to do was boogey while holding the foam noodle.

Elissa and her husband held the camera and filed the entire thing. It felt like their hearts were going to explode form happiness. But what would the world think?

After their prom ended, and Rachel left for home looking as bright as a summer’s day, Elissa quickly posted the event on social media.

It was no surprise that people would love the adorable gesture, but she had no idea it would go insanely viral – even reaching news outlets.

Elissa felt the same thing she had felt on the first day she had seen Curtis as a baby. She knew he was special.

His heartfelt act just reinforced how amazing he really was. And he certainly set the bar much higher for every boy on the face of the earth!