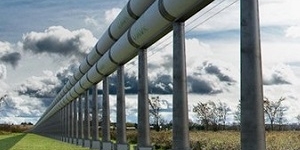 Unless you’ve been living under a rock for the past few months, you’ve surely heard some of the rumors surrounding the Hyperloop. The proposed train of the future will supposedly revolutionize transportation, and assure riders they will never again have to deal with the inconsistency of coal-driven engines, stowaway railcar hobos or the daunting possibility of being robbed by Jesse James and his gang of bandits (that’s still what trains are like, right?).
In any case, all of the buzz around the Hyperloop will be confirmed shortly when Elon Musk, the man behind the design, will finally reveal the details. Here’s what we “know” so far.

According to Elon Musk, the Hyperloop will not only change the way we move from city to city, but also it will do so on the cheap. Musk claims the loop can be built for just one tenth of the cost of the high-speed rail system that’s currently being built in California. So basically, he says that by the time California’s $69 billion HSR project is finished being built, it will have been a huge waste of money and will quickly be rendered irrelevant. Solid investment.

One of the aspects of the proposed Hyperloop that intrigues people the most is the fact that it will supposedly be completely self-propelled. While there are certainly other bullet trains that run without the aid of fossil fuels, none are nearly as fast as the Hyperloop is said to be. Curious parties anxiously await the unveiling of the design plans, and have speculated a system powered by magnets, or vacuum tubes, or some kind of mix of the two. Basically, this is some serious Jetsons-type stuff.

Yeah, sure, it’s fast. But how fast can a train realistically go? Well, according to Elon Musk, faster than the speed of sound. And if you need a relative comparison to understand just how fast that is, just know that it’s almost twice as fast as a commercial airliner. Musk calls the design a “cross between a Concorde, a rail gun and an air hockey table,” and in case that sounds terrifying to you (which is probably should), don’t fret, because he also says his design is one that could never crash.

Perhaps the most impressive possibility associated with the Hyperloop is just how convenient it could make travel between relatively placed cities. Musk says that his system will transport travelers from Los Angeles to San Francisco in as little as a half an hour, and could do the same for close-proximity cities like New York and Boston. On the downside, commuters won’t be able to get off at stops in between (unless Musk also has designs for some kind of elaborate catapult system), but for anyone who wants to see Alcatraz and the Hollywood sign on the same day, the Hyperloop will make life a whole lot easier.

In case you haven’t figured it out already, Elon Musk is pretty much the coolest man alive. Coming from anyone else, the claims being made about the loop might seem ridiculous, but Elon Musk has been known to turn dreams into reality. Musk is the co-founder of Paypal, the man who made the electric sports car profitable with Tesla and a revolutionary in space travel thanks to SpaceX. Let’s put it this way—this guy is so successful he’s admitted he won’t even have time to build the Hyperloop himself, but will instead release open source design plans for others to modify and tackle.
Must Read
Everything that you want to know about the, The Bachelor
Mom Sells Baby's Crib, Buyer Returns And Tells Her To Look In The Trunk
Get Hand Picked Wine from Winc