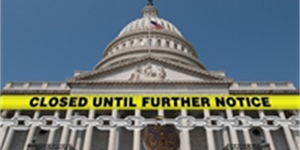 Well, they’re at it again, those stubborn senators and rascally representatives: they’re threatening a government shutdown. A “shutdown” of the federal government occurs when the houses of congress and the executive branch fail to agree on a budget, thus money is not distributed to the myriad allocations the government normally funds. This time, as has been the case so many times before, budget negotiations are being used as a way to debate issues dividing the two primary political parties. If the Dems and the GOP can’t find common ground by the end of this week, then the federal government will start hanging “CLOSED” signs all around the nation.

If you and the family were planning a visit to Yellowstone or Mt. Rushmore, you can go ahead and unpack those bags if the government shuts down, because it will mean all national parks are closed for business. And no more museums in Washington D.C., either, those will be closed, too. You can still visit the local mall and get some shopping done, we guess. And make sure you return those shoes that didn’t fit.

One thing that sucks about a government shutdown is Senator Ted Cruz, the outspoken, heavy-browed freshman senator from Texas. Cruz, a Tea Party darling more beholden to rigid ideology than the constraints of logic and pragmatism, is the de facto spokesman for Republicans hell-bent on gutting the Affordable Care Act, and he and those of his ilk are using the issue as a fulcrum. The House has passed a budget, but one that defunds the ACA. Despite the fact that everyone knows this is all theatrics as President Obama will never sign off on such a measure, still Cruz leads the charge toward screwing the entire country because they really hate universal healthcare legislation.

3 The TSA Will Be Going Strong

OK, we’re being slightly facetious: despite the fact that airport security lines move at a maddeningly slow pace and despite the fact that many of the “security measures” imposed by the TSA are farcical at best, freedom-infringing at worst, we still appreciate that they are trying to keep us safe. And even in the event of a federal government without funds, the TSA, the FBI, the military and various other “essential” government workers would remain at work.

2 Citizens Relying on Government Aid Will Just Have to Wait

Everyone from veterans who receive care from the VA to seniors who rely on social security payments will see their aid arriving late, if at all. Healthcare providers who are usually paid through programs like Medicare and Medicaid may not receive reimbursement cash in a timely manner and government funded studies could come to a halt. Sorry, folks trying to find cures for dangerous diseases or seniors merely trying to keep warm and well-fed, you’ll just have to be patient!

1 This Is Becoming the Norm, Not the Exception

In March of 2013 the federal government passed a budget. That means both houses of congress approved the budget and then sent it to the president, who signed it. That’s what is supposed to happen annually. But it had not happened in four years before that March. The government had been funded through numerous stopgap measures, with temporary budgets and extensions put in place to keep the country limping along rather than properly funded. In years gone by, even in the midst of the most acrimonious climates, the federal budget was never used as a political football. Today it seems to be more like a punching bag.